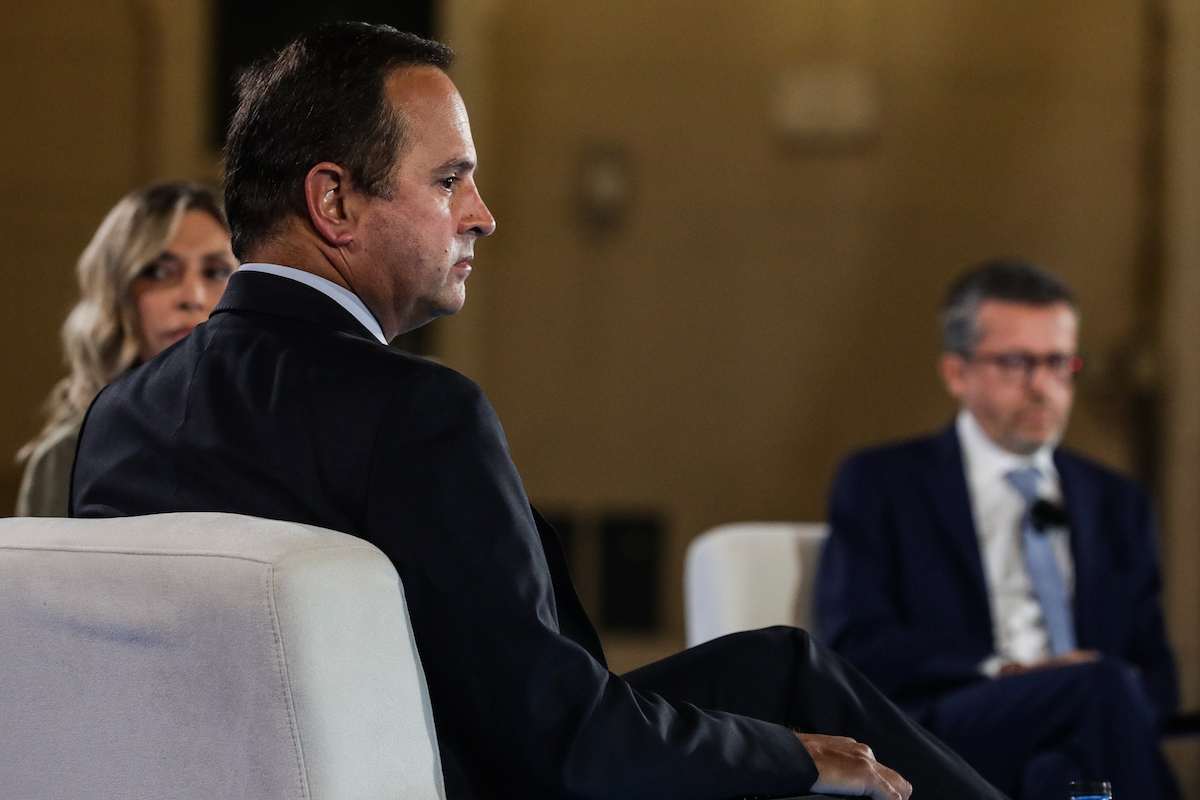 This Tuesday, Fernando Medina and Carlos Moedas staged a heated debate, which was marked by exchanges of accusations. If Medina accused Coins of being a “chameleon”, the Social Democratic candidate said that the Lisbon mayor was a “marketing director”.

Medina accused Coins of political use of cases which involved the Lisbon City Council and devalued its proposals to help young people to buy a house and to combat mobility problems in the city.

Faced with the accusations, the PSD candidate justified himself with the “need to scrutinize” the 14 years of socialist government in the Lisbon chamber. “There is something wrong with this urban planning service”, he pointed out, quoted by Público newspaper. “They are not cases or cases. These are serious problems”.

It was then that Medina accused Coins of being a “chameleon” that “he goes on saying some things in one place and the opposite in another”. “He wants to be right with God and the Devil. This is fatal in politics,” he added.

Coins snapped back, saying that Medina is a “marketing director” of the municipality.

“Fernando speaks as if the program [Renda Acessível] was working. Basically, he’s a great marketing director, but he is not the mayor”, shot the former European commissioner, quoted by Expresso.

From accusations to disagreement

With a photograph of a run-down townhouse, where a large family lives without the minimum of conditions, Moedas accused Medina of not knowing this reality and of having 1,600 closed houses at Gebalis, the company that manages the social districts. The president of the Lisbon Chamber denied this allegation.

In addition to the exchange of accusations, Medina and Moeda spoke about what they defend for the city in different files. They totally disagreed on mobility, housing, fees and taxes or environmental policies.

Carlos Moedas said that “people are fed up with paying taxes” and that, therefore, he wants return 32 million euros of personal income tax to the people of Lisbon.

“The City Council of Lisbon is the autarchy in the AML that has the lowest taxes”, snapped Medina. The mayor also pointed out that the chamber had reduced its liabilities by around 1,000 million euros, while the PSD led her to “bankruptcy” when he ruled Lisbon.

The case of the former councilor Manuel Salgado, accused in a judicial inquiry related to the construction of the Hospital CUF Tejo, and who continues to be a consultant to Medina, was used as a weapon for throwing Coins.

“We have had a correct institutional posture. We want investigations to proceed quickly and we will cooperate. There is no one accused, pronounced or tried of any crime. My role is to ensure that all irregularities are investigated. It is recurrent to show political benefits during electoral campaigns”, justified the socialist.

The fact that Fernando Medina’s number two on the list for local authorities, Agnes Wolf, having a contract worth 800 thousand euros with the Lisbon City Council was also brought up.

Medina said that she is “one of the most prestigious architects in our country” and, according to the DN, accused Moedas of leaving “the problems of Lisbon to the background”. “I don’t place my campaign on the covers of Correio da Manhã”, he added.

The debate shifted to one of the central themes: housing. Currencies said that Medina had not fulfilled the goal of making available the 6,000 municipal houses that he had promised four years ago is “one of your biggest failures”.

One of the measures of the social democrat is exempt the payment of IMT to young people up to 35 years old who buy their first home for up to 250 thousand euros in the capital.

It’s a “little discount”, retaliated Medina. According to the mayor, “what will make the difference is not the IMT discount, but having the 50 thousand euros to give up”.

“The PSD program is another Christmas ball”

As for mobility in the Portuguese capital, Fernando Medina believes that the reinforcement and improvement of the railway networks and the expansion of the underground are essential.

“What is remarkable is that a candidate in 2021, with the knowledge he has, is able, in an entire chapter on climate change, not to have a word about reducing emissions from transport, which is the biggest source of emissions in the city. of Lisbon”, attacked Medina. “It’s shocking.”

In turn, Carlos Moedas proposes the construction of deterrent parks at the entrance of the city and the free public transport for young people up to 23 years old and people over 65 years old.

In the face of criticism from his opponent, Coins recalled that, as European commissioner, he was responsible for creating a fund of 3.5 billion euros a year to combat climate change.

Medina also remembered that introduced the metro pass, which reduced the cost of all trips in Greater Lisbon to 40 euros — a measure that was rejected by the PSD.

“We carried out a reform of the greatest social and environmental importance. The PSD program is another Christmas ball”, shot.

In response, Moedas stressed that “the Novos Tempos coalition has five parties”, stressing that it has its own ideas.