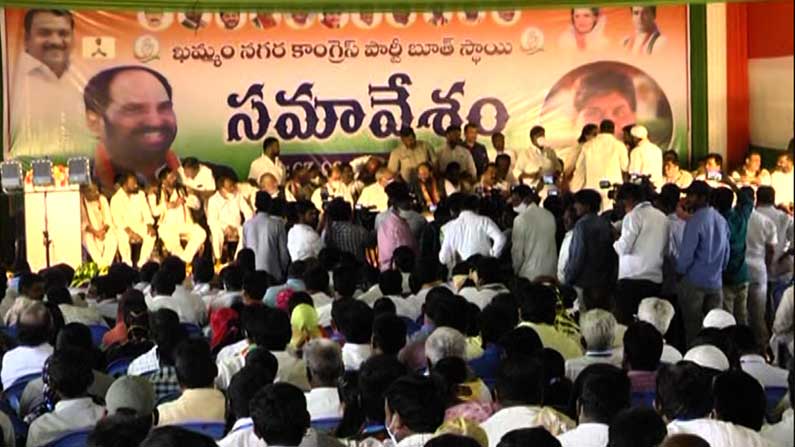 A meeting of Khammam Congress city level booth committees and divisional committees was held on Sunday at the Khammam Corporation ంలోని Sequel Conference Hall in Khammam in the wake of the graduate MLC elections.

A meeting of Khammam Congress city level booth committees and divisional committees was held on Sunday at the Khammam Corporation ంలోని Sequel Conference Hall in Khammam in the wake of the graduate MLC elections. The meeting was attended by AICC state affairs in-charge Manikkanthakur, PCC president Uttam Kumar Reddy, CLP leader Mallu Bhattivikrama, Union ministers Renuka Chowdhury and others. On this occasion, they said that they were incensed at the attitude of the TRS and BJP in power in the state and at the center.

Manikkam Thakur, AICC state affairs in-charge, said the KCR family would be prosecuted when the Congress came to power in the state and the country. Thakur criticized the BJP and the TRS for not being allies and for making their journey like a friendship in Delhi and wrestling in the streets. He said that he was witnessing Bhadradri Ramu and declared that injustice would not be done to the activists who believed in the party in theory and those who won and betrayed the party symbol would not come back under any circumstances.

PCC president Uttam Kumar Reddy said the next government would be the Congress. He said that they were preparing a log of police officers who were making false allegations against them and would pay them along with interest when they came to power. Uttam alleged that Puvada Ajaykumar was arrogantly threatening Congress workers in the district and committing corruption and irregularities.

CLP leader Mallu Bhattivikrama said that the Congress had a history of fighting against the British rulers and that every activist should serve as a soldier until the Center and the state return to power in that spirit. Former Union Minister Renuka Chowdhury said that Khammamzilla is a Congress stronghold and district leaders and activists have the ability to fight the ruling party and win. He said that everyone has the spirit to work together, no matter how small the differences. The meeting of district Congress presidents and city Congress presidents in the state unanimously decided that Rahul Gandhi should take back the reins of the AICC presidency.

Visakha Steel Plant Strategy: YCP leaders remain silent till yesterday and speed up as a result