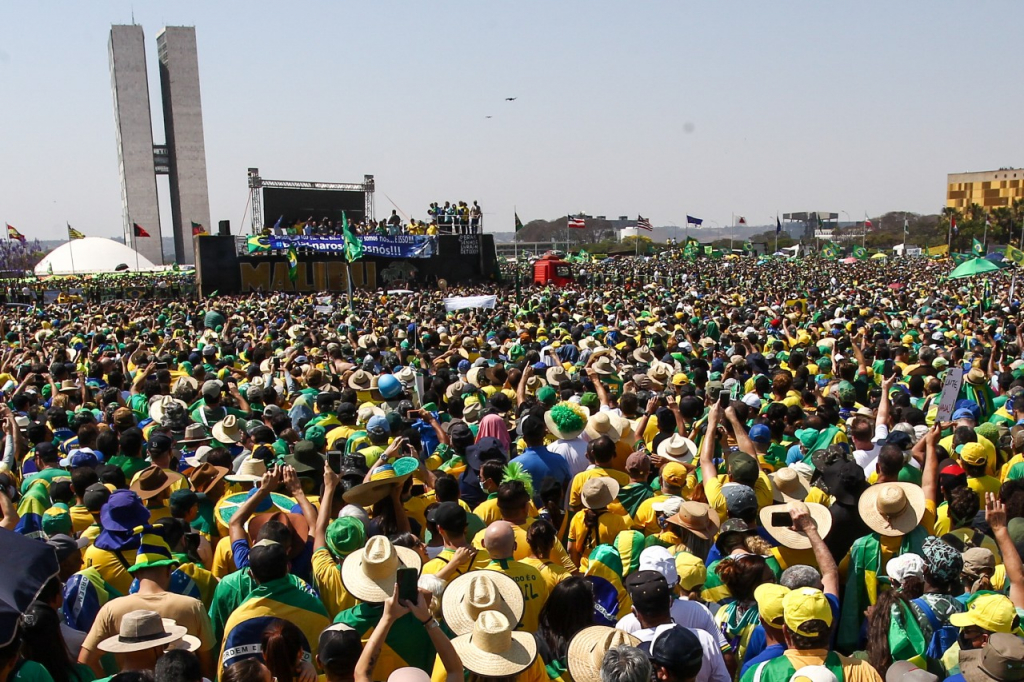 To supporters, the president also affirmed, in the Esplanada dos Ministérios, that he will not be able to accept that “a specific person continues to barbarize our population”.

ANTONIO MOLINA/FOTOARENA/ESTADÃO CONTENTBolsonaro spoke in Brasília and will make a speech on Avenida Paulista (SP), this Tuesday afternoon, 7

In a speech at the Esplanade of Ministries, in Brasília, this Tuesday morning, 7th, the president Jair Bolsonaro returned to attack the minister Alexandre de Moraes, of the Federal Supreme Court (STF), without mentioning it by name. To supporters, the head of the federal Executive said that the magistrate “has lost the minimum conditions to remain inside that court”. “Or the head of this Power [ministro Luiz Fux] fit yours, or this Power can suffer what we don’t want”, followed the country’s representative, adding that “those who act outside of it [Constituição Federal] fits in or asks to leave”. The pocketnarists present reacted to the cries of “I authorize” and “Alexander out”. Also on Tuesday, Bolsonaro will make a statement on Avenida Paulista, in São Paulo, in an act that should take place from 15:00 onwards.

“We will no longer accept that any authority, using the force of Power, overrides our Constitution. We will no longer accept any measure, any action that comes from outside the four lines of the Constitution. We also cannot continue to accept that a specific person from the region of the three Powers continues to barbarize our population. We cannot accept any more political arrests in our Brazil. Or the head of this Power [ministro Luix Fux] frame yours, or that Power can suffer what we don’t want. Because we value, recognize and know the value of each Power of the Republic. We all, here in the square of the three Powers, swear to respect our Constitution. Whoever acts outside of it fits in or asks to leave. A person from the Federal Supreme Court lost the minimum conditions to remain in that court. All of us here, without exception, are the ones who will say where Brazil should go”, he said. Bolsonaro also stated that he will participate, this Wednesday, 8, in a meeting of the Council of the Republic, but, so far, the meeting has not been scheduled. “I ask you to listen to me around 4 pm on Avenida Paulista. As Chief Executive, it would be easier to stay at home but as I have always said throughout my political life, I will be where the people are. I’m going to São Paulo and back. Tomorrow I will be at the Council of the Republic, together with ministers, for us, together with the presidents of the Chamber, the Senate and the Federal Supreme Court, with this photograph of you, to show where we must all go”, he added.

In recent weeks, Bolsonaro has criticized the decisions of Minister Alexandre de Moraes and the Inspector of the Superior Electoral Court (TSE), Luis Felipe Salomão, which reached supporters of the President of the Republic, such as former federal deputy Roberto Jefferson, the federal deputy Otoni de Paula (PSC-RJ), singer Sérgio Reis, and profiles and channels on social networks investigated for the dissemination of false news. In an interview with Radio Capital of Cuiabá, on August 17, the head of the federal Executive said that Salomão had committed “a barbarity” by giving “a pen stroke to demonetize certain pages of people who have criticized the lack of more transparency in the vote”.