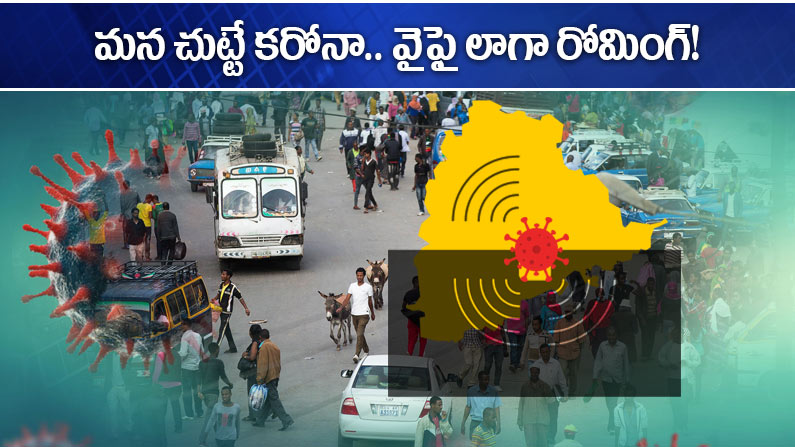 Hyderabad-based CCMB scientists have issued a fresh alert on the spread of the corona virus. CCMB, NIN and Bharat Biotech jointly conducted a study in the wake of the year after the corona virus entered Telangana …

Coronavirus moving like WiFi: Hyderabad-based CCMB scientists have issued a fresh warning about the spread of coronavirus. CCMB, NIN and Bharat Biotech jointly conducted a study in the wake of the end of the year when the corona virus entered Telangana. In addition to the surprising aspects of this study, shocking risk factors also came to light. However, CCMB scientists also told good news after a recent study.

By the second day of March, the first case of corona virus infection in Telangana has been registered. A person from Dubai was diagnosed with a corona positive on March 2, 2020. A young man from Bhagwannagar reached Hyderabad via Hyderabad from Dubai. The corona positive was detected for the first time in that passenger. He was treated specially at Gandhi Hospital. The virus was found in a young man named Ram Teja who went to Dubai for office work. Ram Teja was discharged on March 13 after treatment. Everyone thought there would be nothing after the first case. At the same time, the people of the state were horrified by the Markaz incident in Delhi. Traces of the virus among the passengers from there made Telangana tremble. Markaz‌ exacerbated the corona outbreak situation among passengers and their close associates. In particular, Corona initially supported the health minister’s home district of Karimnagar.

The number of corona positive cases in Telangana has reached a peak level by September 2020 as the number of corona cases has doubled. July, August and September 2020 saw the highest number of Kovid positive cases in Telangana. The highest average death toll was 9.96 in September. There are currently 163 new corona positive cases reported in Telangana (from March 1 morning to March 2 morning). One has died with Corona in the last 24 hours. The number of people who have recovered from corona is 157. At present, 1,907 people are being treated for corona in Telangana. Another 774 are being treated at home quarantine. Corona prevalence slows down after November 2020. Corona cases are being reported between one and two per day. The death toll has dropped dramatically, with 98 percent recovering. The percentage of those who recovered in Telangana was higher than the national average.

In this context, a recent joint study by CCMB, NIN and Bharat Biotech revealed key points. CCMB has revealed some surprising facts regarding corona calculations. Scientists have found that 75 per cent of those currently living in Hyderabad have corona. This item was confirmed by CCMB. It is learned that CCMB has also submitted a report on the study to the Telangana government. A recent study found that some people have no symptoms despite being infected with the corona virus. It is estimated that antibodies are produced in 54% of the population of Hyderabad city. The details of the study have been confirmed by CCMB Director Dr Rakesh Mishra.

Currently the corona penetration is declining. However, considering the findings of the Zero study, the corona virus is still around us. In a way, the corona virus continues to roam around us like WiFi. Scientists warn that the corona could boom again if neglected. CCMB scientists are warning that corona calculations will be overturned if sluggishness is displayed. However, CCMB scientists have revealed that those who have recovered from a corona infection once have a better chance of getting a corona infection again. Dr Rakesh Mishra says there is no re-infection in those who have recovered from the corona. Corona size and intensity are lower in Hyderabad than in other parts of the country. It seems that about 80 percent of people have the ability to tolerate the corona. Medical groups say the percentage of antibodies could double with vaccines.

Health Minister Itala Rajender said on March 1 after he was vaccinated that the corona virus was under control in the state. However, the high number of new cases being registered in neighboring Maharashtra is a cause for concern. Large numbers of people commute daily from Maharashtra to Nizamabad, Adilabad and Hyderabad in Telangana. There is a growing fear among the people that the virus will spread in Telangana once again through them.

ALSO READ: Do you know who is behind Chinnamma Sanyasa?