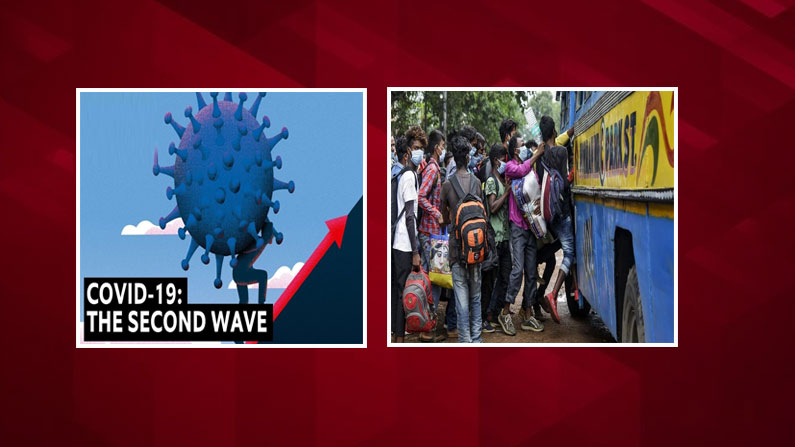 corona cases once again: Kovid‌ cases are gradually increasing. Cases have been on the rise since day one in almost five states. This is the second wave.

Covid Second Wave: Winter is turning into a mild summer. In the middle it was twilight. The real precautions must be taken now. Experts warn that otherwise it will be over. The corona second wave is coming in the country .. It has been heard for many days that it is coming. Now the thought is happening. Kovid cases are steadily increasing. Cases have been on the rise since day one in almost five states. It is said to be a signal to the Second Wave. The situation is similar in the Telugu states. If not in the hundreds .. there is an increase.

The authorities were alerted. Authorities said night curfew was being imposed in Pune as a precautionary measure. It was clarified that the curfew will be in force from 11 pm to 6 am. Authorities announced that all schools and colleges would be closed until February 28. The Pune Divisional Commissioner said the new rules would be released. In Maharashtra, 6,281 Kovid corona positive cases were confirmed. In Mumbai alone, 897 new cases were reported. Emergency services will be allowed. Brihanmumbai Municipal Corporation mayor Kishori Padnekar has warned that a lockdown is imminent if corona rules are violated.

Corona is not gone yet .. Does anyone care if the government, officials and doctors warn you to put on a mask and not sanitize? The result is now visible. The virus has been declining since the beginning of 2021. Now the dose has increased again. It is a matter of concern that 14,000 new cases were registered in a single day across the country after January 29. Yesterday alone, 14 thousand 264 new cases were registered in the country. Cases in Maharashtra, Madhya Pradesh, Chhattisgarh, Punjab and Kerala have been on the rise since last week. The Union Health Ministry has warned the respective state governments to take precautions in the five states where the virus is on the rise.

The highest number of cases were reported mainly in Maharashtra and Kerala. The number of new cases registered in these two states in the last 24 hours accounted for 75.87 per cent of the total cases. The number of cases in Madhya Pradesh has been steadily rising since May 13. In Punjab too, new cases have suddenly increased. Kovid‌ has been making his presence felt in Chhattisgarh for the past few days. In addition to the new cases, Kovid deaths are also on the rise in these states. These states account for nearly 75 percent of the deaths recorded across the country. Maharashtra in particular has the highest number of deaths.

Governments say the situation is caused by people leaving the rules in the air, regardless of the changes in the virus. People are reckless in things like wearing masks and adhering to physical distance. If left unmanaged, they can be left astray and lose the right path. CCMB recently announced that the corona virus has undergone several mutations in the country. It is said that this poses a great danger. Two types of mutations in particular plague the country. Experts say the days of next month should be very vigilant.

Monkey Viral Video: The work done by the monkey who went viral on social media .. Netizens’ comments on whether they will do the same