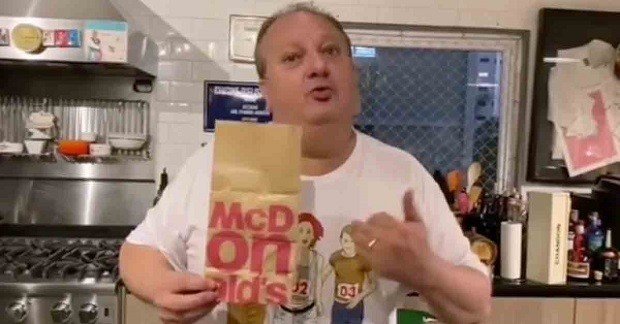 Erick Jacquin: “There won’t be a next time”, said about McDonalds (Instagram/Reproduction)

the chef Erick Jacquin he had his own “Nightmare in the Kitchen” last weekend. In a video posted on Instagram, the Frenchman who became nationally known for presenting the “Masterchef” he vented about an order made via delivery at the fast food chain McDonalds: “they are not professionals” said.

No Instagram, the video already has more than half a million views and just over 100,000 likes.

According to Jacquin, the reason for her dissatisfaction with the order was the way the products were delivered (from those that actually arrived). “I just placed an order to deliver to my house from this place that is very well known, the best known fast food in the world,” said Jacquin.

“The sandwich came glued to the ice cream: cold sandwich and melted ice cream. The Nuggets with sauce didn’t even come, they weren’t delivered,” complained the French chef. “If I wanted melted ice cream, I’d get a milkshake,” he said.

According to Jacquin, McDonalds offered him a discount voucher for the next orders, but “there won’t be a next time”, he shouted.