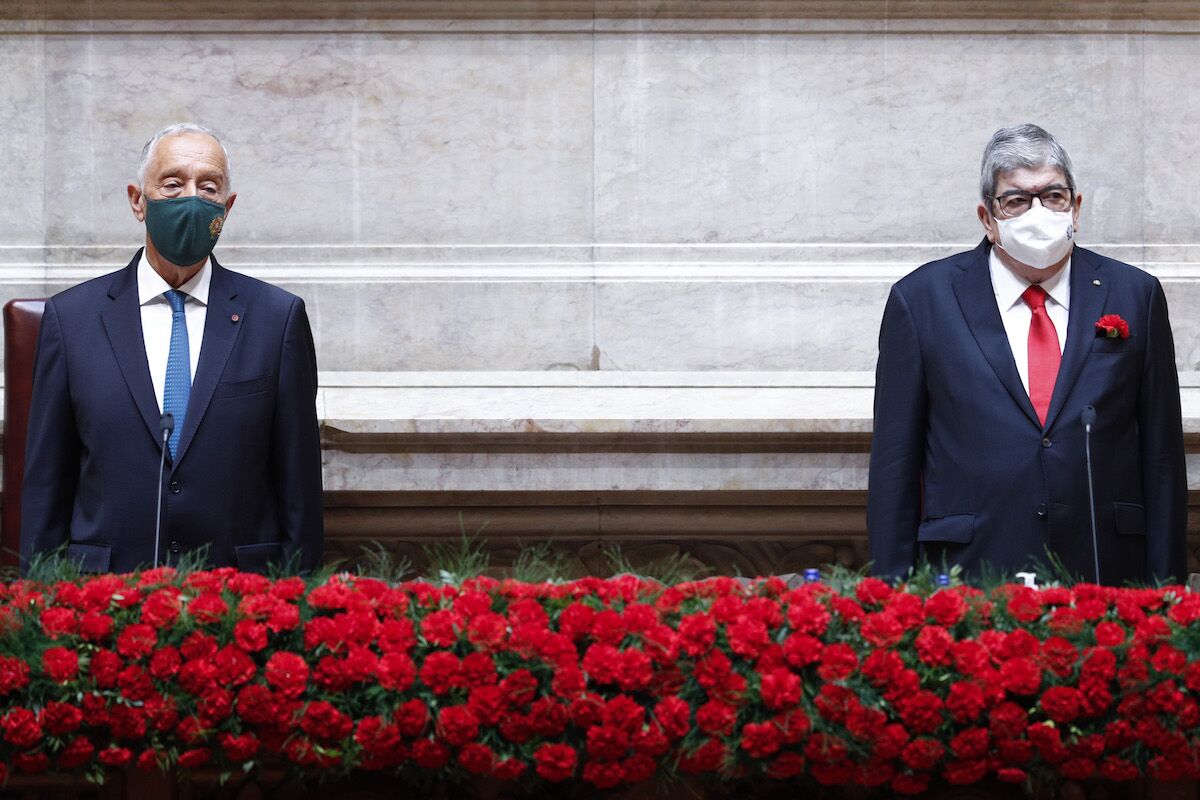 The solemn commemorative session of the 25th of April in Parliament was, for the second consecutive year, restricted due to the covid-19 pandemic.

It fell to the President of the Assembly of the Republic, Eduardo Ferro Rodrigues, make the first intervention, having appealed to deputies from different parties to overcome political blocks and honor the legacy of the constituents.

“On this day, I want to evoke all and all those, coming from ideological projects so distant and almost incompatible, knew how to converge in the essential, elaborating and approving the ambitious social, economic and political program that was the Constitution of the Portuguese Republic of 1976, whose entry into force happened on this day, exactly 45 years ago. A Constitution that made possible a great multiplicity of Government solutions and, above all, a Constitution that guaranteed political stability ”, he maintained.

“It is this lesson, full of topicality, and the historical experience of the Constituent Assembly that today, in a pandemic context, I want and must remember, affirming the importance of everyone being part of the solution. Representing the diversity and plurality of Portuguese society, it is our obligation honor the legacy of constituents, and the thirteen legislatures that followed, overcoming blockages and translating into law the solutions to the country’s problems, and for the many, and increasingly demanding, challenges that we face and that we still have ahead ”, declared the former leader of the PS.

Ferro Rodrigues’ first words were to refer to the current state of emergency because of the covid-19, considering that there is now a “horizon of redoubled hope” with the different vaccines.

“It was a year of combat, in which health professionals and all those who allowed the country not to stop deserve national recognition. It was a year with many victims, up to yesterday, 16,957, that we paid tribute to in this Assembly of the Republic three days ago. ”

The president of the AR also took advantage of his speech to give a warning about the current debate around a law referring to unjustified enrichment.

“Holders of public and political positions have to participate and decide to improve the legislation on themselves, based on the changes made in 2019. But, beware: there are no owners of transparency, nor is it acceptable any logic that puts the elected, the judicial magistrates, the prosecutors, as suspects at the outset ”, he declared. A position in which he was applauded mainly by MPs of the PS.

“It is in the Assembly of the Republic that the structural laws for the country are approved. It is here that, in a transparent manner, the Government’s action is daily monitored and scrutinized. This is where the main national political debates take place ”, he said, before leaving another challenge to the deputies.

According to Ferro Rodrigues, “greater involvement with citizens is required, a progressive approach to citizens, an approximation of the elected and voters, in the double sense ”.

“It is necessary for everyone to be aware of this, starting with all of us, who serve the Portuguese and the Portuguese in this Assembly. Work and example by being, by far, in the group of institutions, the most transparent, the most scrutinized, more scrutinable.”

The President of the AR later stressed that “the April Revolution brought countless conquests, and although it put an end to the brutifying illiteracy that, until then, we witnessed, it has not yet succeeded in eradicating, in Portugal, the ideas and values ​​that characterized that dark period in history, many of them asleep since then ”.

“One of the great virtues of democracy and freedom is that it allows coexistence between all political creeds, including anti-democrats. On social media, promoters of false news, hate, misinformation, slander, lies, count for many hundreds, and reach millions of targets. The comment boxes of some bodies, said of social communication, are an open sewer. This is not just a national reality. Quite the contrary, ”he declared.

For Ferro Rodrigues, they are “signs of regression, as Pope Francis identifies them, which alerts us to new forms of selfishness and loss of social meaning, masked by a supposed defense of national interests”.

“It is not easy to fight the simplistic speech of the anti-democrats. It is not easy to combat misinformation, lies and fear. But I know, however, that April’s democracy is resilient enough to resist this onslaught, and robust enough to fight it ”, he maintained, receiving applause from the deputies.

In the opinion of Ferro Rodrigues, we are faced with “a fight in which democratic parties are fundamental”.

“They are part of the wall that owes us defend against the advances of intolerance, xenophobia, hatred. A fight in which the strengthening of the rule of law and the accountability of all protagonists are absolutely essential. A fight in which free, impartial and credible social communication, capable of informing facts, with truth, is fundamental ”, he added.