The Knight Yuri Mansur | became the first finalist of the Brazilian delegation of equestrianism on Tokyo Olympics. The 42-year-old athlete qualified at dawn this Tuesday (3) to the final of the jumps, which will take place at 7:00 am this Wednesday (4), at the Equestrian Park, in the Japanese capital.

With the state of emergency imposed by the pandemic of coronavirus, only very select groups managed to fly to Tokyo, among them: athletes, coaches, referees, journalists… and horses. More than 300 horses flew to the capital of China for the Olympic Games for the equestrian events. But how does a horse fly from one country to another? Do they also need passports?

how to make a horse fly

Transporting a horse from one country to another can be done in the same way as with humans: by plane. But in the case of horses, they fly in spaces much larger than regular passenger seats. Depending on which equestrian event the horse competes in, it can weigh anywhere from 500kg to 600kg (sporting event horses are the lightest, while dressage horses are heavier). 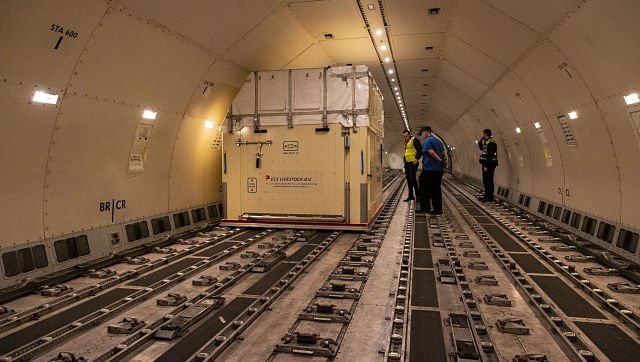 Mobile stable inside the cargo space of a plane bound for Tokyo.

Mobile stable inside the cargo space of a plane bound for Tokyo. (FEI/Leanjo de Koster/Disclosure)

To Tokyo, the horses were loaded into mobile stables, which were taken to the holds of large cargo planes. These stables are equipped with hay and water. In addition, the animals are accompanied by veterinarians and companions, even during the trip. During the trip, the animals do not undergo sedation, only in situations where the horse is stressed and undergoes a light level of sedation.

According to the Federation Equestre Internationale (FEI), the international governing body of equestrian sport, the Tokyo Games have 247 horses, which were transported in 20 trips to the Chinese capital. Curiosity: the company responsible for the transport has been the same since the Olympics in Rome, in 1960.

The first flight carried 36 horsepower on a Boeing 777-F SkyCargo from Emirates, who left Europe for Tokyo. The animals — which together weighed about 22 tons — went to represent nations like Denmark, Germany, Great Britain, Holland, Japan, Brazil and Morocco. And, unlike two-legged passengers, horses not only get their meals during the trip (including special meal orders, of course), but they can also snack throughout the journey — and when they’re not taking a nap.

In addition, the plane carried around 13.5 tons of equipment for horses and 12 tons of feed (excluding meals and snacks on board), in addition to 40 liters of water per animal. The plane’s internal temperature is between 14º C and 17º C, so that the horses are comfortable and avoid possible health problems.

Do horses have passports? 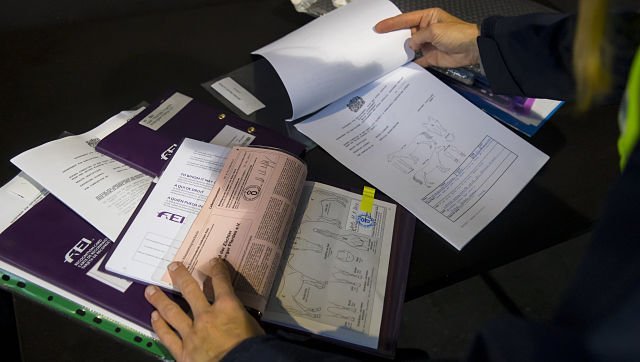 A passport for an Olympic horse while boarding for the Tokyo Games.

A passport for an Olympic horse during boarding for the Tokyo Games. (FEI/Leanjo de Koster/Disclosure)

Yes, one horse passport has an identification page containing bodily details and where the horse was born. The big difference between human and horse passports is that the document contains information about the vaccines that were taken by the animals, such as those for flu and tetanus.

To page of vaccination must be updated even before the horse is allowed to leave the country. This step is extremely important for disease control among animals, as many of them travel from different countries and can transmit diseases that do not exist elsewhere.

For the trip to Tokyo, the animals completed a seven-day quarantine and then received a health certificate authorizing boarding. In addition, in the 60 days prior to the Olympics, the animals could only be based in the following countries: Argentina, Australia, Belarus, Canada, Chile, Japan, Saudi Arabia, New Zealand, Norway, Qatar, Singapore, Switzerland, Emirates United Arab, United Kingdom, United States of America and all member countries of the European Union (EU). 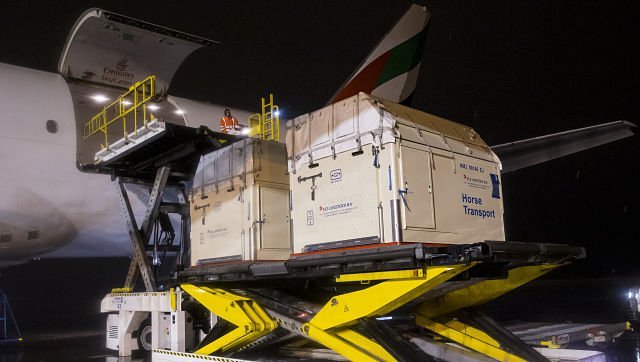 Horses in mobile stables during a flight between Berlin and Tokyo.

Horses in mobile stables during a flight between Berlin and Tokyo. (FEI/Leanjo de Koster/Disclosure)

The 1956 Olympic Games in Melbourne, Australia, were the first held in the southern hemisphere and had a peculiarity: for the first time in history, a sport was not played in the host country. The races were held in Stockholm, Sweden, five months before the start of the Games due to Australia’s stringent quarantine laws, which would end up delaying the entry of foreign horses.

What is Dressage, Jumping and Riding?

O equestrianism it is unique for several reasons. It is not only the only Olympic event that involves horses, but also the only one where men and women do not compete separately. Equestrian events involve three distinct modalities: dressage, riding and jumping.

O training it’s artistic. Engages the rider making the animal move through subtle commands. There is a mandatory round in which all moves are pre-set. Then there is the freestyle round in which the rider and horse perform to music.

O jump is the best known. The rider and horse are timed along a course where the horses have to jump obstacles that can include parallel handrails, triple bars, water jumps and stone walls. Time penalties may apply if the horse and rider do not pass the obstacle or fail to jump. The horse and rider who finishes the fastest course and with the fewest penalties wins.

A horsemanship it involves three events in this order: dressage, cross-country, and jumping. It happens over several days. Like golf, the goal here is to get the lowest score. The cross-country element features horses running at 32 km/h on a course with various obstacles, including fences, as well as water jumps. Individual and team medals will be awarded in all three equestrian disciplines.