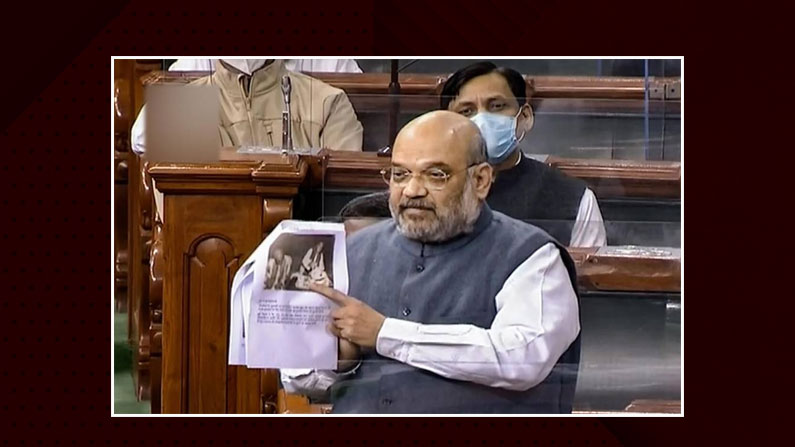 Amit Shah refuted the remarks made during a visit to Visva-Bharati University that he was sitting in Rabindranath Tagore’s chair.

Amit Shah clarified : Union Home Minister Amit Shah responded to the allegations against him in Parliament. He refuted the remarks made during a visit to Visva-Bharati University that he was sitting in Rabindranath Tagore’s chair. Amit Shah has clarified that the allegations made by Congress MP Adhir Ranjan Chowdhury are not true at all. It was revealed that he was sitting in the window seat allotted to tourists. He brought the evidence to the Lok Sabha on Tuesday and sought the Speaker’s permission to put it before the House.

Commenting on this, Amit Shah said, “I have asked Visva-Bharati Vice-Chancellor for a report to find out where I am sitting. Look at those photos and videos and tell me if I am sitting in the Tagore seat or not, ”said Amit Shah. Former President Pranab Mukherjee said he was sitting in the same window seat as former Prime Minister Rajiv Gandhi. Amit Shah reminded that tourists will have the opportunity to sit there.

Members, however, were advised to know the facts while speaking in the House. He alleged that the background of the ruling party was the reason for making false allegations against him. Amit Shah shows photos of former Prime Minister Jawaharlal Nehru sitting in Rabindranath Tagore’s chair in the Lok Sabha. He also refuted allegations leveled against Bharatiya Janata Party president JP Nadda. Congress leader Adhir Ranjan Chowdhury on Monday alleged in the Lok Sabha that Union Minister Amit Shah was sitting in the chair of Vishwakavi Rabindranath Tagore in Santiniketan during his visit to Bengal.