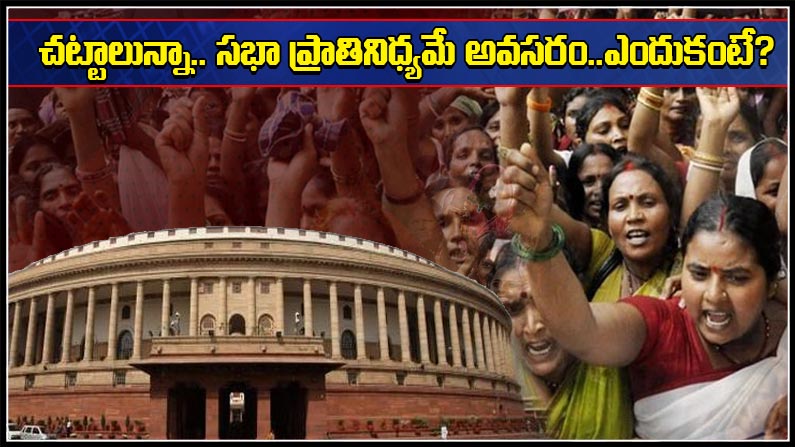 If women are not properly represented in the legislatures where many laws are drafted .. how honest is the law that is made for their protection and for their welfare? Where are the armory systems formed for their implementation? These questions have been asked many times by many women’s groups and well-known women. Many are of the opinion that laws such as the Domestic Violence Act, Equal Property Rights and Dowry Prohibition passed in our country’s legislatures have not been properly enforced over the years due to lack of integrity in design and enactment of laws without requiring enforcement systems.

In fact, Indian law does a lot for the protection and welfare of women. But statistics do not seem to indicate that law enforcement is limited. Special protection is also provided to women under Section ‌ 100 of the IPC. It is not wrong for a woman to attack a man in self-defense. Even if the man dies in that attack, it is not as if the woman has committed a crime. Section‌ 228-A – A woman who has been sexually assaulted should not give her name, photo or details in the media without permission. Section ‌ 354 – It is an offense to see, touch or gesture a woman’s body with sexual intent. Section‌ 376 – Case registration of sexual harassment of a woman who came for treatment. Section ‌ 509 – It is an offense to speak insultingly to women, to make gestures, or to display obscene objects. Section 4 294 – Women can be punished for up to 3 months if they walk on the road, wait at bus stops, sing obscene songs, make noise and cause trouble. Fellow employees in the workplace can file a complaint under the Harassment Act of 2013 if the boss disturbs office work and bothers for sexual contact.

The law provides for up to ten years in prison under Section 373 for bringing a girl under the age of 18 into prostitution. If a woman is sexually assaulted by a group of more than one person or by one member of a group, each person in the group becomes a criminal. Everyone is liable to punishment under Section 376-B of the IPC. Section 375 of the IPC provides for life imprisonment from seven years if found guilty of rape. There is a chance of 5 to 7 imprisonment under IPC 354 for insulting and assaulting a woman. IPC 496 provides for imprisonment for up to 7 years and a fine for men who cheat on women by pretending to be unmarried.

Harassment of husband, aunt and uncle is punishable by up to three years imprisonment under Section 498A. Under the Dowry Prohibition Act, giving and taking dowry are considered two offenses. But filing to enforce this law is extremely rare. Insulting women is punishable by up to one year in prison under Section ‌ 509. Under Section 493, a person who commits adultery, has sex or cheats is liable to imprisonment for ten years and a fine.

Although it appears that many armistice laws have been enacted, the number of those convicted is very small compared to the number of those who commit such crimes. Many women’s union leaders and women lawyers are of the opinion that the reason for this is the flaws in the laws themselves. When making laws, the House addresses all issues on behalf of women and makes laws addressing the loopholes they raise. Then they are the ones who will definitely punish those who commit atrocities and crimes against women. If women are not properly represented in the legislature, they are of the opinion that there will be flaws in the laws that are designed to protect them. An example of this is the recent Fearless Act, which seeks to increase the representation of women in the legislature. This is evidenced by the fact that after the enactment of the Nirbhaya Act, even after the Pokso Act was drafted to make it more rigorous, many atrocities were committed against women.

ALSO READ: From mobility to vehicle production .. Ola Cabs‌ is a huge project

ALSO READ: Chennai is a big strategy behind the selection of Pujara .. That is why the management came to Dhoni’s decision!