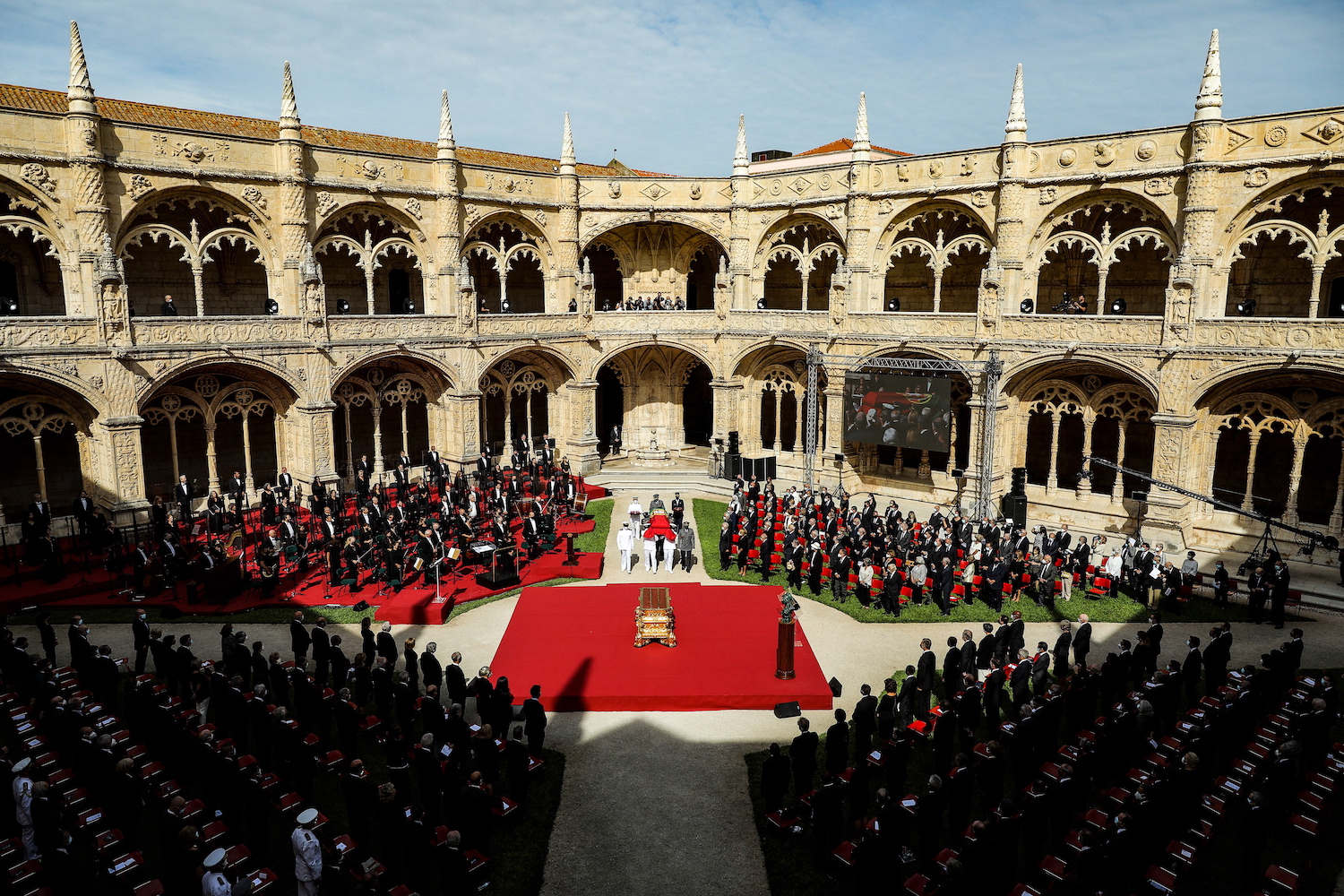 The sons of former President of the Republic Jorge Sampaio, Vera and André, remembered their father today as “a good man”, who knew that in life and in politics “nothing can be done alone”.

It was up to the eldest daughter, Vera Sampaio, the first speech at the official ceremony in the cloister of the Mosteiro dos Jerónimos, in an intervention in which he wanted to remember his father with the “authenticity and proximity” with which he spoke to his children.

“our father was a good man, attentive and available, for whom people counted most of all, not people in general, but each person with a name and face”, he highlighted.

Jorge Sampaio, underlined his daughter, “didn’t like arrogance” and “he cultivated friendship and camaraderie because he knew that, in life and in politics, nothing can be done alone”.

The former president’s son, André Sampaio, visibly moved, remembered his father as a man “popular without being populist, always close without ever trivializing proximity, who was statesman and at the same time common citizen, who was loved without liking to be venerated”.

“He was a fighter and a peacemaker, knew how to listen and knew how to decide, he valued the convergence, but also the moments of divergence, he was a fair, courageous man, but not afraid to cry, he was a good man, an extraordinary father”, he stated.

the son of the former head of state left a special thank you to the current and former Presidents of the Republic, to the President of the Assembly of the Republic and Prime Minister, as well as to the family of former head of State Mário Soares, who died in 2017. “It was notorious the commotion when they expressed, but also when they hugged us”, they emphasized.

In Spanish, he made a special greeting to the king of spain, Filipe VI, present at the ceremonies, saying that “the father liked his family very much”, also thanking the expressions of friendship and affection from Portugal to Timor, from Brazil, to São Tomé, from Guinea to Mozambique.

About ten minutes before the start of the ceremony – which started ahead of schedule at 11:00 – the most solemn moment it happened with the arrival of the urn in the center of the cloister of the Mosteiro dos Jerónimos, with all the guests standing in silence.

“I never wanted to be a hero, but I was”

The current president of the republic, Marcelo Rebelo de Sousa, today paid a last tribute to the former President of the Republic Jorge Sampaio, stating that he “loved Portugal for its fragility” and “not for its strength”, and that “I never wanted to be a hero, but it was“.

The head of state was speaking in the cloister of the Mosteiro dos Jerónimos, in Lisbon, at the end of an evocative session in homage to Jorge Sampaio, who died on Friday, aged 81.

“He never wanted to be a hero, but he was, in so many of his life spans, heroic. From that discreet heroism, more lyrical than epic, sweeter than impulsive. Firm but sweet. And that’s also why we remember him with sweetness. And we thank him for the love he never denied Portugal, for his way of loving Portugal”, he added.

A man cries when he really needs to cry

The prime minister, António Costa, said today that the Republic should be praised for having been presided over by a citizen like Jorge Sampaio, an example of ethical rigor, honesty and vigilant defender of democracy, never giving in to demagoguery and populism.

The executive’s leader characterized Jorge Sampaio as “an example of ethical rigor, sobriety and personal honesty, of human sympathy and empathy, of proximity to people, especially the most disadvantaged, excluded or forgotten”.

Jorge Sampaio “did this with the authenticity he put in everything and with the seriousness that he never gave in to demagoguery or populism. In these times of so many anti-democratic temptations, this heritage is fundamental”, defended António Costa.

The prime minister also recalled the words that Jorge Sampaio uttered in his speech to the Assembly of the Republic, in March 1996, when he was sworn in as President of the Republic: “There are no expendable Portuguese”.

From the perspective of António Costa, this message of “valuing people, national cohesion and social inclusion came from a very deep conviction in him”.

“And it can, on this day, symbolize their human attitude, their democratic struggle, their political action, their moral idealism – and also remains a great message. for the days of the present and for the times of the future. There are no expendable Portuguese and, therefore, we cannot do without Jorge Sampaio”, stressed the prime minister.

Jorge Sampaio, from the perspective of the current leader of the socialists, also characterized himself as “a politician who loved intellectual debate, open to new ideas and changing times, cultured and informed of what was happening in the world”.

“He was a politician who was both firm and flexible, who never gave in to values essential, but knew how to patiently build support, promote agreements, consensus. The respect it has earned in all political circles and in all sectors of society is the best guarantee of its exceptional political and human quality”, he stressed.

“Sampaio was at the same time prudent, bold and astute, resilient and persevering. A generous and inspiring man. With the courage to let emotion express itself in tears, because a man cries when he really needs to cry”, he concluded.

The funeral procession of the former President of the Republic Jorge Sampaio arrived at the Mosteiro dos Jerónimos at 10:35 and was applauded by hundreds of people, who remain outside to watch the funeral through a giant screen.

Jorge Sampaio’s funeral procession, which had left around 10:00 am from the former royal arena, approached the Jerónimos Monastery, where an evocative ceremony took place, and was applauded by hundreds of people.

Upon arrival at the monastery, the urn was removed by cadets from the three branches of the Armed Forces and received again applause from the popular, this time longer and more intense.

The former head of state received honors of state for the battalion with band and fanfare from the GNR. The three badges were carried by three officers of the Armed Forces.

Jorge Sampaio’s wife, Maria José Ritta, and children, André and Vera, joined the President of the Republic, President of Parliament and Prime Minister while the GNR battalion played the funeral march.

Once the ceremony started outside, the vast majority of people who applauded the arrival of the funeral procession to Jerónimos continued, leaning on security barriers, in silence, watching the broadcast of the funeral on the giant screen installed near the entrance to the monastery.

Applause at the last goodbye

The funeral procession of former President of the Republic Jorge Sampaio made the last stop at the Alto São João cemetery, in Lisbon, at 12:38 pm today, earlier than initially planned, and it was received by popular applause.

A few hundred people waited at the Alto de São João cemetery for the last farewell to the former head of state, with some bars being placed to keep the distance between the people and the funeral procession.

Initially scheduled for 13:30, the funeral procession arrived at 12:38 at the cemetery, where a honor guard consisting of 165 soldiers of the three branches of the Armed Forces, commanded by frigate captain Silva Caldeira.

The honor guard is made up of the Armada band, the Navy standard, a company of marines, another one of commandos and another one of soldiers from the Air Force Technical and Training Center in Ota.

The funeral ceremony that takes place in the Cemetery of Alto de São João is private.