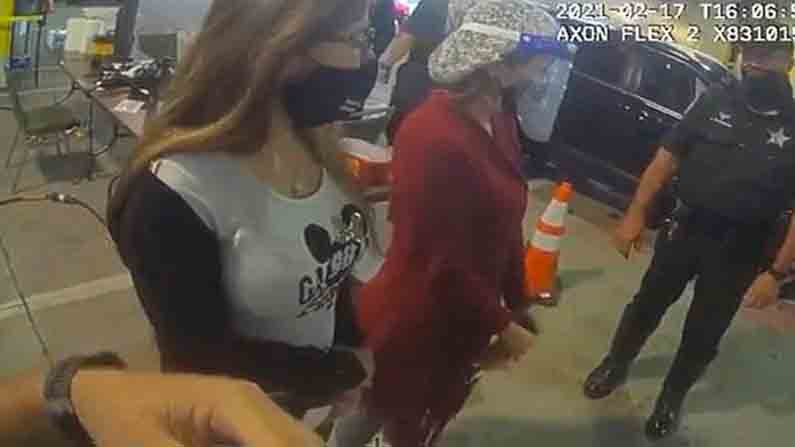 Everyone knows how much turmoil the corona epidemic is creating around the world. However, people are taking various measures to protect themselves from these giant fangs.

women for covid vaccine: Everyone knows how much turmoil the corona epidemic is creating around the world. However, people are taking various measures to protect themselves from these giant fangs. The situation is even worse, especially in the superpower America where Kovid is booming. Meanwhile, an incident came to light in which two women pretended to be elderly for frying the corona vaccine. Took place in the city of Orlando in America. Everyone was blindfolded when the first dose of the vaccine was given. During the second dose, the two women got into a fight with the police.

The vaccine process continues across the United States. Corona Warriors, the medical staff, are giving priority to the elderly as per the instructions to give the vaccine first to the elderly over 65 years. A 35-year-old woman from Orlando was accompanied by another 45-year-old woman in the background. Together the two changed their birth dates to over 65 and registered their names in the vaccination registration. Afterwards, they went to the vaccination center dressed as an old man, wearing gloves, goggles and spectacles.

However, the names of the two women are identical in their identity card and registration list. The medical staff found that the dates of birth were different. Immediately after informing the police they came to light the real Bhagotam of both the women. Police arrested two women and released them after issuing a warning. Once again warnings were issued not to come to the Convention Center for vaccine ‌ or corona tests, for other reasons. It was clarified that arrests will be made if the rules are violated. At trial, the two had already taken the first dose of the vaccine. However, the details of where and when were not disclosed. Does this lead to illegal vaccination? U.S. police have launched a comprehensive investigation into the matter.

Read Also ov Covid Second Wave: Corona wave has started again across the country! Is it twilight ..! Rising statistics are a sign of what ..