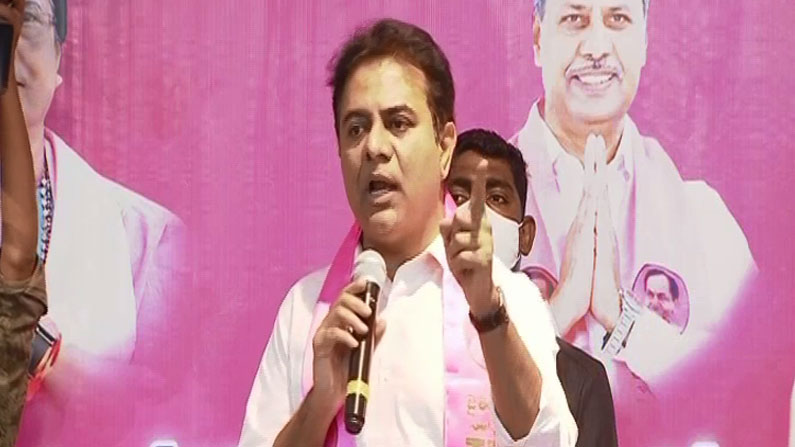 The war of words between the ruling party TRS and the BJP is in full swing. At one point, the heat went beyond political criticism and even personal criticism.

Criticism among the major parties in the wake of the Graduates-MLC elections in Telangana, it is known that every criticism is reaching the level of Tara. The war of words between the ruling party TRS and the BJP in particular is raging. At the same time, being personally critical beyond political criticism raises the heat. In this context, the TRS party working president and minister KTR will raise the flag at a serious level at the TRSV conference held at Telangana Bhavan.

Minister KTR warned that some people were speaking disrespectfully to the CM KCR and that those who were making slander would be retaliated against, including Mitti. He said that KCR had established Swarashtra by establishing TRS under adverse conditions. During the movement, KCR did not have the power of media, money and muscle. As a movement party, the TRS weakened their silence by saying that it was history that had ousted the CMs.

The gun hanging on the wall is also silent .. Churakalantinaru that its value will be known when the time comes. Telangana has always known what it would be like if he said that no one should underestimate the silence of KCR. He recalled that 2 decades had passed since the emergence of TRS on April 27th. TRS as a movement party is said to be in the hearts of the people. BJP leaders are learning lies at WhatsApp varsity. Lies are spreading through social media. The BJP at the center of education has shaved zero. KTR joked that it did not even give the companies that were supposed to come to the state.

Navodaya Vidyalayas also did not belong to Telangana. Telangana has also shown stubbornness in the new medical colleges. BJP, which has discriminated against Telangana, should be allowed to vote. Those who are shutting down the steel industry in Visakhapatnam? One knows what happened on the fly. We have all the logs. Tadakha will show up when the time comes. KTR‌ appealed that the graduates should answer to the BJP by voting in the MLC elections.

BJP leaders have no right to ask for votes, says Minister KTR. He accused the BJP government at the Center of doing injustice to Telangana at every step during its six-year rule. KTR has directed the student wing leaders to repel the false propaganda of the BJP leaders.

Errabelli review by wards and booths .. Minister instructs voters on what to say