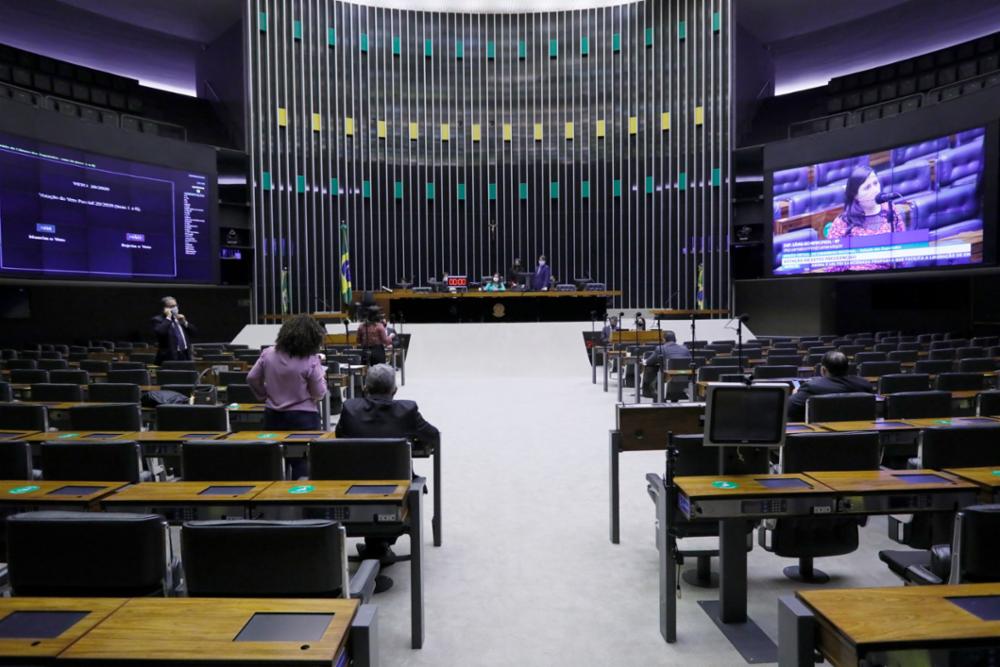 Dispute is polarized between Baleia Rossi (MDB-SP), chosen by Rodrigo Maia to succeed him, and Arthur Lira (PP-AL), leader of Centrão and supported by the government of President Jair Bolsonaro

Najara Araujo / Chamber of DeputiesVoting is scheduled for 10 pm on Monday, 1st

A Chamber of Deputies elects, on the night of this Monday, 1st, the successor of Rodrigo Maia (DEM-RJ) for the position of President of the House. Nine parliamentarians are vying for the post: Arthur Lira (PP-AL), launched by a bloc of 11 parties with 236 deputies in all; Rossi Whale (MDB-SP), launched by a block of 10 parties with 210 deputies; André Janones (Avante-MG); Alexandre Frota (PSDB-SP); Fábio Ramalho (MDB-MG); General Peternelli (PSL-SP); Kim Kataguiri (DEM-SP); Luiza Erundina (Psol-SP) and Marcel van Hattem (Novo-RS). To be elected in the first round, the postulant needs an absolute majority of votes – if all 513 deputies vote, 257 votes will be required. If this number is not reached, the two most voted will run for the second round. The session started at 7:20 pm and voting is expected to begin at 10:00 pm. Despite the nine candidates, two stand out as favorites: Arthur Lira, leader of Centrão and supported by President Jair Bolsonaro, and Baleia Rossi, chosen by Rodrigo Maia. Although it formed a bloc with center and opposition parties, such as the PT, the emedebista’s campaign suffered from dissent in recent weeks. On Sunday night, 31, the DEM opted for neutrality – the decision came after the majority of the group had declared their vote in Lira. Hours before the registration of his block, PSDB chiefs, such as the governor of São Paulo, João Doria, entered the scene to prevent the party from also disembarking from the group led by Baleia. Faced with this scenario, Arthur Lira’s allies bet on a victory in the first round, with approximately 280 votes. Check out the special coverage of Young pan on the election for the presidency of the Chamber of Deputies.

20:12 – General Peternelli is the second candidate to speak

General Peternelli (PSL-SP) is the second postulant to speak at the Chamber floor. He starts his presentation proposing that the population can choose, through a virtual poll, items to be included in the voting agenda. “The deputies and the Brazilian people are the ones who should guide most projects to be Brazilian,” he said.

At the end of his speech, Alexandre Frota (PSDB-SP) gave up his candidacy, announced his vote for Baleia Rossi (MDB-SP) and quoted a speech by Minister Augusto Heleno, of the Institutional Security Office (GSI). At the PSL national convention, an event that made the name of Jair Bolsonaro official as the party’s candidate for the Presidency of the Republic, Heleno said: “If you scream catch Centrão, there won’t be one, my brother”. The toucan was applauded by a portion of the deputies in the plenary.

20:00 – Alexandre Frota is the first to speak and attacks Jair Bolsonaro

Federal deputy Alexandre Frota (PSDB-SP) is the first candidate to speak. Elected in 2018 by PSL, Frota says that the election is being defined by “vote buying” and “interference by the Planalto Palace”. “In politics there are no principles,” he summarized. “My candidacy is one of protest, it is one of repudiation”, he adds. While speaking, Frota is booed by deputies from the PSL, an acronym from which he was expelled. The PSDB deputy also stated that President Jair Bolsonaro commits electoral fraud because he allied himself with Centrão – in the 2018 presidential election campaign, the president stated that he would not govern with the “old politics”.

The session that will choose Rodrigo Maia’s successor has started. Voting is scheduled for 10 pm.

REMEMBER – As anticipated by Prime Time Zone, Arthur Lira’s candidacy was made official by Progressistas on December 1, 2020, in a meeting attended by about 40 parliamentarians, among them the government leader in the Chamber, Ricardo Barros (PP-PR), and the party’s national president, Senator Ciro Nogueira (PP-PI). Baleia Rossi, in turn, was announced by Rodrigo Maia (DEM-RJ) to succeed him on December 23rd. The emedebista disputed Maia’s preference with deputies Elmar Nascimento (DEM-BA), Marcelo Ramos (PL-AM), Marcos Pereira (Republicanos-SP), Luciano Bivar (PSL-PE) and Aguinaldo Ribeiro (PP-PB). The lack of definition in the group of the current President of the House gave Lira the advantage in articulation.

In the final stretch of the campaign, Baleia Rossi suffered from dissent. Lira’s allies monitored divisions in parties such as PSL, PSB, Solidariedade, DEM and PSDB. On the eve of the election, the National Executive of the DEM, Maia’s party, disembarked from Rossi’s block and opted for neutrality. In addition, according to Prime Time Zone, the PSDB’s permanence only occurred after toucan chiefs, such as the governor of São Paulo, João Doria, entered the scene.