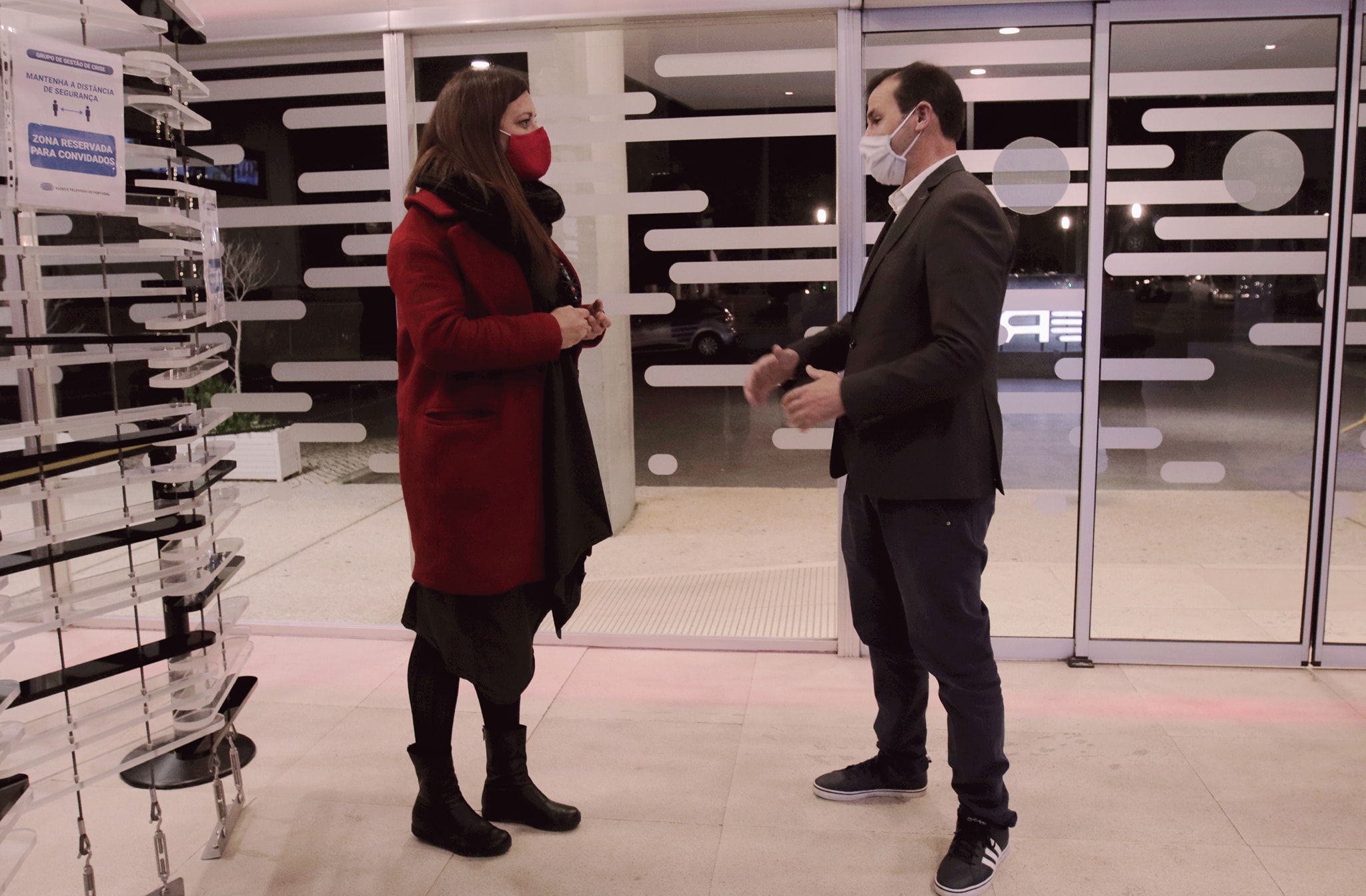 Marisa Matias and Vitorino Silva before the debate for the Presidential Elections 2021 on RTP3.

The confrontation between Marisa Matias and Vitorino Silva was little debate. The two candidates for the 2021 presidential elections had little divergence and even exchanged praise with the MEP assuming herself as “the candidacy of the left” and the paving stone stressing that it is the “left to the right”.

The debate on RTP3, moderated by journalist Carlos Daniel, did not have great moments of disagreement and Marisa Matias even made a point of underlining, already in the final part, that there is “much respect for the trajectory and for what Vitorino Silva has done“.

Before that, the candidate from Rans, a small parish in the municipality of Penafiel, had told the candidate that was doing “very well” at a time when she was talking.

The third most voted in the 2015 elections also praised RTP for allowing debates with Vitorino Silva, considering that “it is very important that the candidates are able to debate on equal terms”. The sixth most voted in the past elections responded that they are debates at the “back door”, on RTP3.

Vitorino Silva collected 152 thousand votes in 2015 and the objective for these elections is to have “One more vote”.

“Five years ago, at this time, didn’t have one frame television“, Considered the paver, stressing that by this time, already has “two agendas” to make appointments and who can’t “meet all the journalists” who previously “were distracted” and didn’t want to know about him.

Vitorino Silva also cast doubt on the polls, pointing out that “the only thing that is true is the vote of the people”.

“I never showed up in the polls and the last time I showed up, they said I had no votes in Porto, where I got 7 thousand signatures”, he stressed, stressing that the city Invicta is its “bastion”.

So he concluded that does not believe in “no poll”.

Likewise, the candidate supported by the Bloco de Esquerda (BE) devalued the polls and recalled that “five years ago, at this time, even had results lower than those that appear at this time”, stressing that was after Maria de Belém and who ended up staying ahead of the independent candidate, despite connections to the PS.

“The candidacy of the left”

During the debate on RTP3, Marisa Matias wanted to point out that there is not “an excess of candidates on the left”, but rather “a deficit”.

“Maybe we even have a problem with the resignation of the Government party not having advanced for these elections ”, he said in a criticism of the PS.

Marisa Matias has no doubt that it is her the true “candidacy of the left”, the only one that “can prevent the blockades” that have occurred in the Presidency of the Republic and the one that presents “better conditions”, “with support that goes far beyond BE”.

Vitorino Silva reinforced that his candidacy is “left, but right”.

Marisa Matias presented herself in the debate as a candidate who intends to “bring a crisis response“, Defending that in the Presidency of the Republic there must be“ someone who prevents the blockages we have had in so many areas, such as health, work and issues related to the banking system ”and that“ it will not be with the Marcelo Rebelo de Sousa / António duo Coast that these blocks ”will be solved.

In a tone of speech that sounded very much like BE, Marisa Matias accused the President of the Republic of having been “a block to leftist understandings that were important ”, citing“ issues related to Banif and Novo Banco ”and the“ labor issue ”.

Marisa Matias referred that Marcelo Rebelo de Sousa “allied himself more with employers than with workers” and that he made “an agreement to make the conditions of so many precarious even more precarious, namely with the question of the trial period”.

Thus, the MEP said that Marcelo’s mandate was “more negative than positive”.

When Marcelo doesn’t need the PS, “Costa’s days are numbered”

Vitorino Silva also criticized Marcelo Rebelo de Sousa, pointing out that he “did things very well” and that “in others, been distracted“.

Rans’ candidate stressed that Marcelo is characterized by “intelligence and smartness”, but that “sometimes, put smartness ahead of intelligence“And” intelligence has to be the spice “, he concluded.

Vitorino Silva also said that the President of the Republic, “sometimes, messed up the functions of State ”, an idea that says it was transmitted to him by other people“ of the people ”.

The tamper also highlighted the case Tancos, considering that he is “sure” that Marcelo Rebelo de Sousa “Knew everything that was going on” as “supreme commander of the Armed Forces”.

Regarding the fact that the PS did not present a candidate for the presidential candidate, Vitorino Silva found that “António Costa knows that he needed Marcelo and Marcelo needed António Costa to catch the socialist vein”.

“Marcelo and the Government rocked each other” to maintain power, he pointed out.

But “if the PS votes en masse for Marcelo and Marcelo has 70%, the first person to be set aside will be António Costa, because [o Presidente da República] you’ll never need it again ”by the Prime Minister, also predicted Vitorino Silva.

“As soon as Marcelo doesn’t need the PS, Costa’s days are numbered“, He added.

Marisa does not get rid of the dilemmas of the Bloc

After being confronted by Ana Gomes with the lead of BE to the State Budget for 2021 during the previous debate, Marisa Matias was again leaning against the wall with one of the dilemmas that currently disturb the life of the Block.

This time, the journalist Carlos Daniel questioned Marisa Matias about her position regarding the Resilience Fund approved by the European Union (EU) and the mega vaccination campaign that is underway, after Catarina Martins revealed a lot of skepticism about the European response to the pandemic crisis.

In the case of the Vaccination Plan, “there was a remarkable cooperation effort“Which made it possible to” unlock resources and define an important policy in record time “, said the MEP, stressing that she worked in one of the European Parliament’s commissions in this area.

This “is one of the good examples of European cooperation in this pandemic crisis”, he considered, but stressed that it is necessary to know if “the ownership of that vaccine it will be ours or not ”.

As for the european bazooka, Marisa Matias noted that the “amounts are not enough” and that it started by being composed “practically all of subsidies” and later to become “practically all debt instruments”. In addition, “it was subject to an increase in transfers to countries that already receive more, such as Germany”, he considered, noting that “it was the condition” for the bazooka to be approved.

Thus, Marisa Matias concluded that “Is yet to prove” whether the measures will be adequate.

“Imagine the prey of money …”

On the other hand, Vitorino Silva recalled that “there were always loads and loads of money” from the EU and that, despite this, problems continue such as the fact that “there are 700 thousand people without family doctor“.

Rans’ candidate cited the example of the Penafiel Hospital that serves 500,000 people, including “People from Marcelo’s grandmother’s land”, by Celorico de Basto, and that “does not have an MRI”.

Thus, Vitorino Silva said that “the important thing is to know where [é que o dinheiro] will arrive”.

“Imagine the prey of money, then there are many fields around; who opens the prey, where does the money go next? Go to the fields closest to the prey. The fields that collect the water are at the foot of the door and we have to put the fields away from the door, close to the prey and that is what has not been done in these 40 years ”, he pointed out.

In the final phase of the debate, Vitorino Silva found that “politicians delve a lot into what is meaningless” and that, “sometimes, it’s too much talk and less action“. “There is a lot of debate and little is done”, he also shot.

As a motto for what moves him, the paving stone that assumes himself as “the voice of the people” referred that “in 900 years of history, the people have always been an extra, never a leading role. “Why don’t we have the people as president? If it was possible to have a Pope and a UN Secretary-General [portugueses], it is possible for people to go up to the balcony ”, he concluded.

Marisa Matias took the tip to ask “and why not a woman of the people?”