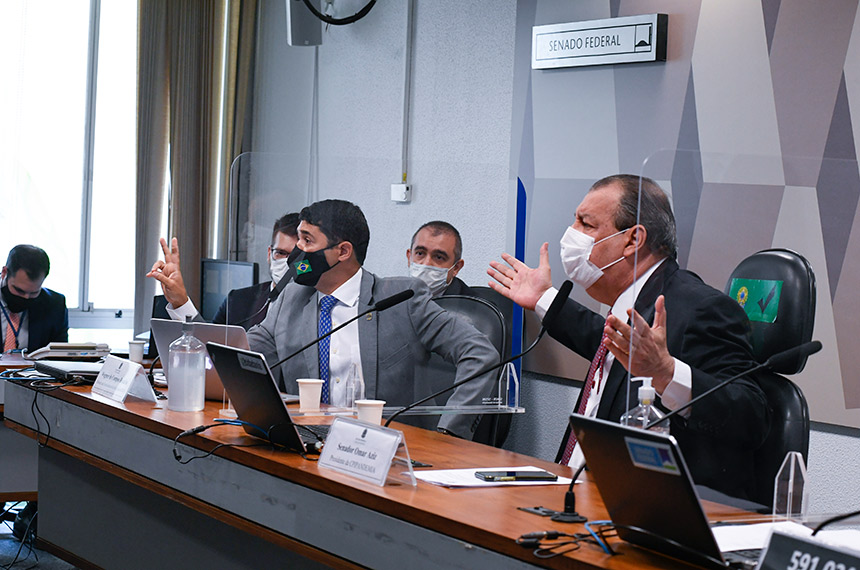 Wagner Rosário admitted that the agency found fraud to a document presented to Health; hearing was marked by an exchange of barbs between the deponent and parliamentarians

Roque de Sá/Senate AgencyWagner Rosário was heard this Thursday, 21, by the CPI of Covid-19

In a tense hearing, marked from the beginning by the exchange of barbs between the deponent and the commission members, the minister Wagner Rosary, of the Comptroller General of the Union (CGU), denied overpricing and overbilling in the case Covaxin, delivered a macho attack on the senator Simone Tebet (MDB-MS), whom he called “uncontrolled”, and left the collegiate in the condition of being investigated. The session ended after the uproar caused by Rosario’s speech, who had been confronted by a series of signs of irregularities in the process of purchasing 20 million doses of the Indian vaccine, one of the main lines of investigation of the CPI to Covid-19.

Rosario and the senators have been on a collision course since the beginning of the session. In the first questions, still in the first part of the hearing, the minister addressed the president of the CPI, Omar Aziz | (PSD-AM), as “doctor”. In response, he was called “petulant” by senator Rogério Carvalho (PT-SE). Just before the break, the deponent said that the rapporteur, senator Renan Calheiros (MDB-AL), had “the obligation to speak the truth”. He was reprimanded by senator Tasso Jereissati (PSDB-CE), who presided over the session on an interim basis. “Respect this House. Several times you have already attacked. Please drop the ball. If not, I’ll take action”, said the toucan. Shortly before the end of the session, Simone Tebet presented dates and documents from the Comptroller General, pointed out contradictions in the information presented to the committee and said that he, as head of the CGU, could indeed have acted to prevent the contract, signed in February 25 of this year, go ahead. The parliamentarian said that Rosário “did the cloth” and acted as a government attorney.

The CGU minister was asked several times about the measures taken by the agency against the former director of Logistics at the Ministry of Health Roberto Ferreira Dias. On October 27, 2020, the Comptroller General, the Federal Public Ministry of Pará and the Federal Police launched the Host Operation, which investigates the favoring of companies in bidding at the Instituto Evandro Chagas, linked to Health. One of the targets was the lobbyist Marconny Albernaz de Faria, who had his cell phone seized. The more than 310,000 pages of message exchanges, obtained on the telephone, were forwarded by the MPF to Covid-19’s CPI. In one of the dialogues, Faria and Dias appear as characters in a “fraud architecture”, created by a director of Necessidade Mediamentos to defraud a federal government’s portfolio bid for the purchase of tests to detect the disease.

“What formal steps did CGU take regarding the need to remove Roberto Dias?”, asked Renan. “We do not have information on the need for Roberto Dias to leave. If it had, we would have taken the measures”, replied Rosário. Dias was exonerated in June this year, after being accused of asking for bribes to buy vaccines. “The CGU didn’t have information about Roberto Dias’ criminal activity that would imply his removal?”, amended the vice president of the collegiate, Randolfe Rodrigues (Rede-AP). “No, it didn’t. None”, countered the minister.

At the hearing, Rosário admitted that an investigation by the CGU identified that the Need defrauded a document presented to the Ministry of Health. “Why, then, did the CGU consider the contract to be regular, if it had already identified fraud in the power of attorney?” asked the rapporteur. “No one can be convicted out of hand, we have something called due process”, replied the deponent. In light of this statement, the members of the commission began to point out an omission in the conduct of the head of the body. According to the minister, he ordered the installation of an audit on June 22, but lawmakers recalled that President Jair Bolsonaro was informed of the irregularities on March 20, in a meeting with federal deputy Luis Miranda (DEM- DF) and his brother, Luis Ricardo Miranda, head of Imports at the Ministry of Health, at Palácio da Alvorada.