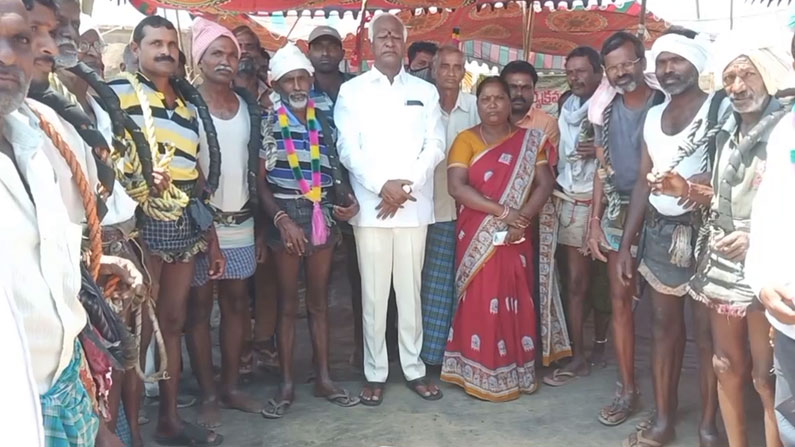 TRS MLC Kadium Srihari expressed solidarity with the protesting Geeta workers in Janagama district. The government has taken into account the just demands.

TRS MLC Kadium Srihari expressed solidarity with the protesting Geeta workers in Janagama district. He assured that the government would take into consideration and address the just demands. Gita workers employed in a reservoir in Uppugallu village in Jafargarh zone of Janagama district have been protesting for the last 6 days demanding justice for themselves. Arriving at Deeksha, Kadiyam Srihari expressed solidarity with them.

Afterwards, Kadiam Srihari said that about 300 families lost their lands and lost their jobs. He said the project would benefit a lot of people, but your problems would be brought to the notice of Chief Minister KCR, Ministers KTR and Srinivas Gowda to meet your just demands.

Kadiyam Srihari assured that 30 acres of granite lease in Uppugallu village would expire in 2022, Atti would cancel the lease and give 10 acres of it and give subsidized loans to Gowda youth for employment. The Chief Minister has spoken to KCR and made it clear that the money you demanded for each tree will be given in addition to what the government will give. He said that after the completion of the election code, the lyricists will be taken to Hyderabad and arranged with the Chief Minister.

Concreting of Uppugallu Reservoir in Jafargarh Zone of Warangal District has gone on amidst intense tensions. In the past, line workers have been prevented from starting work until a clear guarantee is given to support those who are losing their jobs due to the reservoir. On the one hand, while the Gita workers were protesting, the then Tribal Welfare Minister Chandulal laid the foundation stone for the reservoir works and left.

The government has sanctioned Rs 300 crore to build a reservoir adjoining the Uppugallu village as part of the Devadula project. Due to the construction of this reservoir, the farm lands of the farmers of Uppugallu village as well as the palm trees of the Gita workers are being inundated. The government has already conducted a survey on flood-prone lands and compensated some farmers who lost their lands. However, the government has not taken any decision on the issue of palm trees. As a result, Gita workers who depend on these for their livelihood are losing their jobs.

Unaware of this, the government started construction work on the reservoir. A large number of Gita workers protested with their knees bent. They are demanding that work be started only after a clear assurance from the government to support those who are losing their jobs due to palm trees.

There is a conspiracy to amend the constitution to deny those rights. Harish Rao wants graduates to think