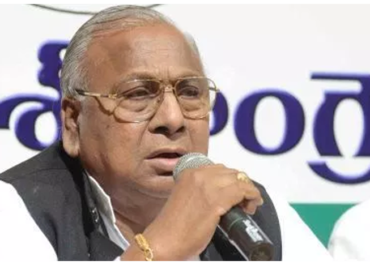 The social media affair is shrinking the Telangana Congress. Former minister Janareddy, like former MP VH today, is lashing out at his own party leaders as if senior Congress leaders are spreading lies on social media. Janareddy, a senior Congress leader, reacted very seriously to the comments on social media. The leaders took a class for half an hour in front of the media saying that it was not correct to criticize each other. He said it was the responsibility of the leaders to take action against fans and followers for their comments. Janareddy warned that otherwise it would be a loss to the party.

Senior Congress leader and former MP V Hanumantrao commented in support of former minister Janareddy. VH said it was good that Janareddy was responding to the false propaganda going on on social media. VH has complained to the TPCC many times that they have been blocking social media for days and saying great things. Everyone is questioning what it would be like to have another meeting on purpose. It is unknown at this time what he will do after leaving the post.

Janareddy questioned whether the Congress, which had given the PM’s post to Peewee, was great, or the TRS, which had given the MLC seat to his daughter Vani. Janareddy said the family has a responsibility to respect the Congress, which has given the post of Prime Minister. However, there are different arguments in Gandhi Bhavan regarding Janareddy’s reaction. He is a big man in the Telangana Congress. They have been protecting the elders whether they are in office or not. Because the …innals have been very silent‌. Gandhi Bhavan held a press meet in Kochi as it is now. For the leaders, the cadre took an hour class. Has he targeted anyone yet? Or is it an inclusive effort? Why this sudden change? This is the debate going on in the Congress circles now.

What is the specialty of this? But now there is something very special behind the press meet, say Gandhi Bhavan sources. Janareddy did not hold a big press meet after losing in 2018. In recent times, he has spoken to the media only once in Sagar and once at his home in Hyderabad. Janareddy also took part in the discussions for the TPCC race two months ago. Said his opinion. But did not speak to the media. At the same time, there was a big uproar in the war party on social media. People like Jaggareddy and VH criticized the press meet. Senior leaders have objected to the criticism and allegations being made on social media targeting some leaders. He spoke in support of the US Alliance, but said that maintaining some independence was not the answer. Even then, Janareddy did not react.

At a time when there is not much discussion on the issue, it is interesting to take an hour-long Janareddy class for leaders and activists on it. Jana objected that if there is anything at a party it should be discussed in internal meetings but what is meant by criticism on social media. They also questioned what it was like to call people like VH. Jana blasted a very big bomb that there were 12 not one such issue. Janareddy as a big man warned everyone to change their ways as this method is not good.

There is a heated debate in Congress over who Janareddy gave the warning to. After two or three months of discussion on social media, it has become interesting to see why the party elders are not getting serious now. In the same vein, Jana commented in her own style on the attitude of the TRS government. He wondered if the Congress, which had given the PM’s post to Peewee, was great, or if the TRS, which had given his daughter the MLC seat, was great.

Before 2018, Janareddy was the one who would ask such questions directly to the government both in the assembly and outside. But it has not been a big reaction since the age of two. Now, several days later, there is a debate as to whether there is any Sagara Mathanam behind the press meet, especially at Gandhi Bhavan. The Nagarjunasagar by-election is scheduled to be held next week. It is in this context that rumors are circulating in Gandhi Bhavan that Janareddy has become active again and has started criticizing TRS while trying to include everyone as a big man in the party.

Leaders’ references to the pink ranks in the MLC election campaign