I-Capital is preparing to launch a commercial and medical administrative mall in the Downtown area of ​​the New Administrative...
Read more

Minister of Trade: The ban on importing sugar continues for a period of 3 months

Today, Monday, the Official Gazette published the decision of the Minister of Trade and Industry, Nevin Jameh, to continue...
Read more

Glamor is the characteristic that defines the film’s costumes The United States Vs. Billie Holiday. So much so that Anna Wintour, editor-in-chief of the North American edition of Vogue magazine, suggested to director Lee Daniels that she look for Miuccia. Thus Prada reinterpreted the singer’s nine most iconic outfits for the feature film. “She knew she wouldn’t go wrong with Prada. I was going to throw myself at Miuccia’s feet because she’s a genius, but I didn’t have to. She admired my work, and I’m a big fan of her, so we were excited, ”said Daniels to Vogue. The Italian brand also participated to portray the luxury of fashion in the 1920s in The big Gatsby.

In addition to Prada, the film about Billie Holiday features costume designer Paolo Neiddu who can be called a glamor specialist, as he was assistant to costume designer Patricia Field in both films. Sex And The City is at Becky Bloom’s Consumer Delusions. Paolo had also worked with Lee Daniels on the E seriesmpire: Fame and Power, exhibited by Fox from 2015 to 2018.

Despite this ostentatious history, the work that portrays the life of the jazz singer has no room for a futile use of luxury. Each piece carries a symbolism and portrays the complex artist that Miss Day was. “The costume had to be as powerful as the story, because Billie Holiday herself was aware of how much the clothes mattered, she used the clothes as activism”, says Alice Alves, a costume teacher.

To portray the 1940s and 1950s, the Prada team used the brand’s archives and photographic records of the time. However, the clothes worn by actress and singer Andra Day to bring Billie Holiday to life have also been updated. According to the Italian house, the strongest elements of the brand’s DNA seen in all collections were used. “This allowed Prada to give a contemporary touch to the clothes, always respecting the time and the history of the costume of the time,” said the brand. The costume teacher points out that Prada and Holiday represent symbols in common: “A powerful, timeless, classic, glamorous woman”.

Prada’s contributions to the film include a purple suit inspired by the 1940s, and silk organza party outfits with a 1950s silhouette, with a bodice embroidered with feathers; in yellow silk with long sleeves, geometric draping and crystals applied following floral motifs; in red metallic satin with bodice; and a column dress in ivory silk satin with a sweetheart neckline and embroidered crystals.

The brand’s creations are a highlight of the feature, but the costume also involves relevant quantities: 25 costumes were designed and made exclusively for production; 50 were mined at thrift stores and at E-Bay; 250 costumes were created for 99 actors with speech; and 3,200 extras were dressed in period clothing. These numbers were shared by Paolo Nieddu with the portal Deadline. 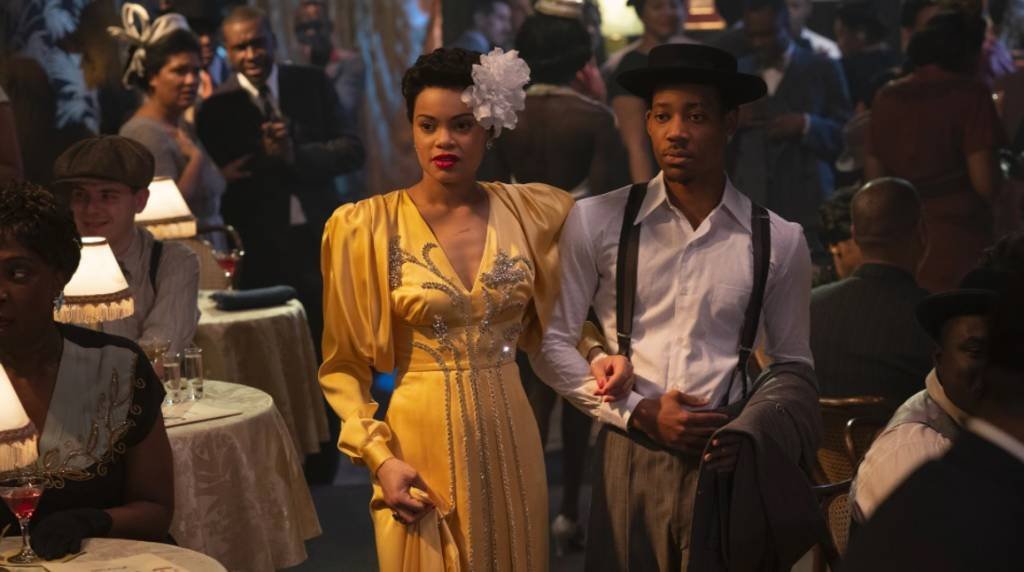 Scene from the movie The United States vs. Billie Holiday, with actors Andra Day and Tyler James Williams.

The white gardenia that Billie started using on her hair to hide hairs that were scorched by a hot curler could not be left out of all this production. During the recordings, 60 fresh white gardenias were used to maintain the trademark of the American artist’s look.

Another fashion resource adopted by Holiday to deal with her personal problems was gloves, she used them to hide the marks on her arms caused by her heroin addiction.

But luxury for Miss Holiday was more than a way to hide her weaknesses. The opulence of fur coats and jewelry was also used to mark that she, even though she was black, had won a place that was reserved only for whites.

I-Capital is preparing to launch a commercial and medical administrative mall in the Downtown area of ​​the New Administrative...
Read more
Sports

Minister of Trade: The ban on importing sugar continues for a period of 3 months

If necessary .. KCR legs will be planted: Minister

International Women’s Day: Even though they are the majority, women face challenges in the labor market – Prime Time Zone

If necessary .. KCR legs will be planted: Minister

Prime Time Zone Spokesperson, Mahabubnagar: 'Employees, teachers, the government is the intestinal tract. Problems could not be solved due to some myths. ...
Read more

Pedro Nuno Santos: PS cannot behave as if it had a majority

The aim of the President of the House, Arthur Lira, is to vote until Wednesday; to pass, she needs at least 308 votes...
Read more

I am ready to be punished if I have done wrong, says actress Tapsi Ponnu on IT attacks – will serve punishment if I...

Cinnati Tapsee Ponnu reacted directly to the recent IT attacks on her home and office. He...
Read more