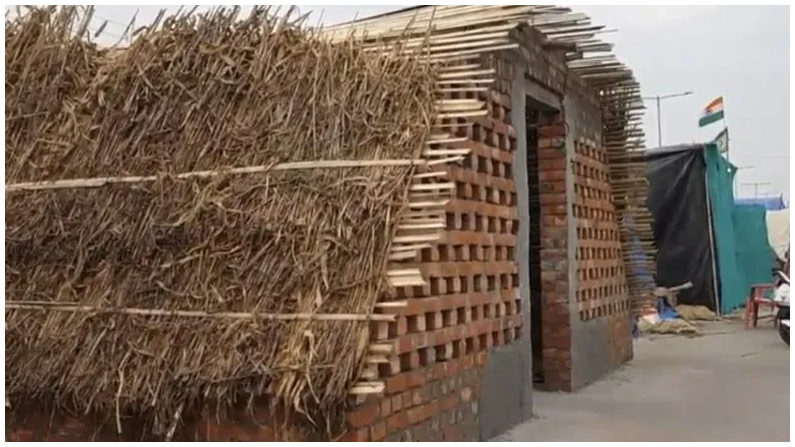 Farmers who have been worried for more than three months seeking the repeal of agricultural laws have taken a new path. They are building their own houses on the Tikri border near Delhi-Haryana.

Farmers who have been worried for more than three months seeking the repeal of agricultural laws have taken a new path. They are building their own houses on the Tikri border near Delhi-Haryana. Construction of houses here started with bricks, cement etc. Although they pay charges for construction materials, no payments are made to labor workers. It is estimated that the construction of each house will cost from 20 thousand to 25 thousand rupees. This means that their construction is going on very cheaply. Many farmers have converted their tractors into temporary shelters. Many sent their tractors to the villages during the harvest season. At the same time, however, they are being used to move bricks and other structures for the construction of houses. Farmer leaders say they have the potential to expand their structures to the Lions Border. They allege that the police arrested many of their breadwinners on false charges during the clashes at the Red Fort on January 26, Republic Day. He said arrests were still being made.

Despite 11 rounds of talks between the Center and the farmer leaders, these have so far failed to yield any results. Agriculture Minister Narendra Singh Tomar has commented that the farmers’ unions are ignoring their suggestions and are refusing to accept the amendment even if they agree to it. Leaders such as Tikayat say they are to blame for the failure of the talks, but say their concerns will not stop until October 2 and beyond. He has already announced that they will protest on a daily basis. Against this backdrop, it is an innovative move for them to build houses on the Haryana border.

Atrocities in Bhagyanagar suburb .. Assault with knives and murder of rowdysheeter .. Police investigating

The central decision in that matter is sabbatical .. Jagan‌, Chandrababu knows everything .. BJP writes for political gain