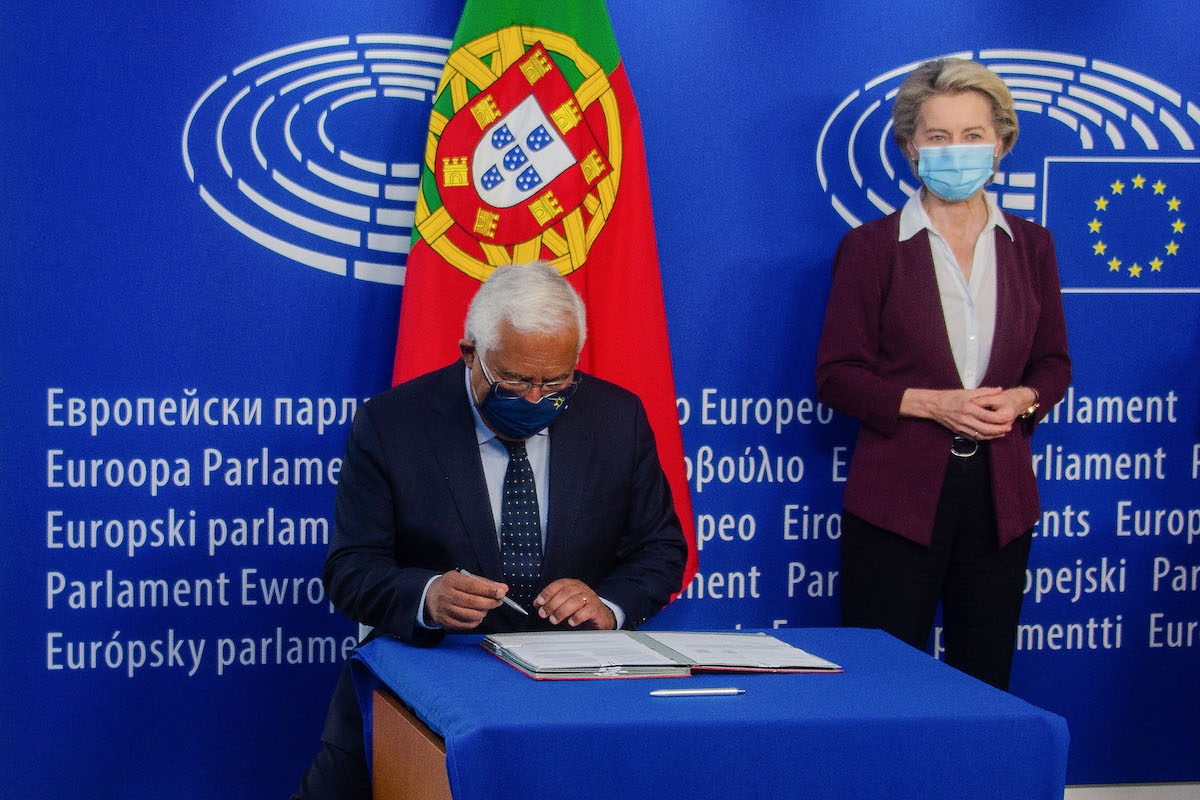 The Prime Minister, António Costa, and the President of the European Commission, Ursula von der Leyen

The Recovery and Resilience Plan (PRR) will allow the execution of 4340 million euros of investment in its first full year of execution.

After delivering the proposal of the Government of OE2022, last Monday night, to the President of the Assembly of the Republic, the Minister of Finance stated that “next year’s budget is the investment budget“.

“It allows us to build a Budget focused on the country’s economic and social recovery. It is a Budget, in the first place, committed to relaunching this economic activity with more investment, with more public investment and more private investment”, emphasized João Leão.

According to Público, the first full year of execution of the Recovery and Resilience Plan will allow investments in the order of 4340 million euros, funds that allow the Government to speak of Portugal as one of the countries of the European Union that will have the greatest growth in public investment in 2022, with a rate of around 30% (when the European average will be, according to the Executive, 7.2 %).

In the proposal for the State Budget, the Government thus highlights the continuation of structuring investments, many of them already underway, such as the railway works, registered on Railroad 2020, and in the expansion plans of the Lisbon, Porto and Mondego subways.

The Socialist Executive also undertakes to make highway investments, even those who were not accepted by Brussels, advancing with the works of the so-called “missing links, of cross-border connections, of accessibility to business reception areas and the increase in the capacity of the road network”, writes the morning.

Another sector where the investments of the PRR will be felt will be in the area of ​​housing, since the program of Support for Access to Housing it has one of the most robust credit lines, with 1251 million.

According to Público, there is also a commitment to start works in 500 homes for which financing agreements were signed, within the scope of the National Urgent and Temporary Housing Exchange, and also in 520 homes in the context of the public housing stock at affordable costs. Portugal should also launch public tenders for seven thousand accommodation places for Higher Education students.

Out of curiosity, according to the weekly Expresso, throughout the 453 pages of the report that accompanies this OE2022 proposal, the Government refers to the Recovery and Resilience Plan more than 300 times: 111 times in full and 212 through the acronym.

It should be recalled that the PRR foresees an investment of 16.6 billion euros, spread over the years until 2026. The State Budget 2022, delivered this Monday at the Assembly of the Republic, foresees expenditures in the order of 106 billion euros. euros.

As social benefits (42,558 million) and the Public Administration salaries (25,782 million) will be the two largest slices of public spending. Together, according to the newspaper, they represent about two-thirds of all the state spends each year.

On the revenue side, the taxes (54,234 million) and the social contributions (28,108 million) are the two biggest sources of revenue, but will decrease as a percentage of GDP. These are followed by sales (7033 million), capital income (2476 million) and other income (6766 million).

Throughout the hundreds of pages describing the Budget proposal for next year, there are also some small measures, “the result of contributions from the various parties and some negative coalitions”, as Público writes.

The morning decided to highlight some of them, such as the tax on packaging of plastic or aluminum for single use in ready-to-eat meals, similar to what was approved in last year’s OE.

Also with regard to the environment, the proposal provides for the application of a carbon tax on air, sea and river travel (a measure that has been in effect since July).

The amount foreseen to apply in the Tariff Reduction Support Program (PART) in the public transport it is also around 138 million euros, to which 50 million can be added if there is a need to increase the supply.

Among others, and also in the environmental sector, in 2022 electric mobility will continue to be encouraged in State bodies, supported by the introduction of 200 electric vehicles exclusively for Public Administration bodies.