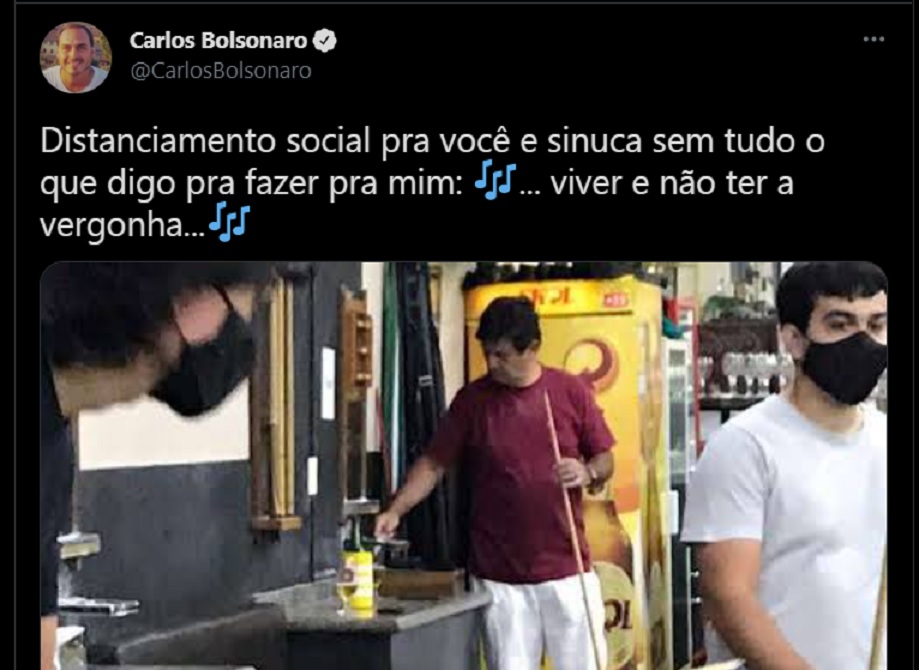 On social media, government supporters recall moments when the former minister would have violated norms of social isolation; opposition shows lines against Bolsonaro

As members of the opposition to Federal government used social media to echo the revelations of the former Minister of Health, Luiz Henrique Mandetta, on CPI to Covid-19 on the afternoon of this Tuesday, 4, the councilman Carlos Bolsonaro, son and supporter of the president Jair Bolsonaro, published on Twitter a series of moments in which the ex-minister’s speeches and attitudes were not “compatible” with the security measures requested by him during the pandemic. “Social detachment for you and snooker without everything I say to do for me,” he said, next to a photo of the ex-minister playing without a mask in a bar. In another publication, the president’s son shows a seven-second cut from the former minister, giving Jair Bolsonaro a reason saying that “the economic crisis will kill people”. Journalist Allan dos Santos also drew attention to the handshake with which Mandetta greeted Renan Calheiros when he arrived in the Senate. “Mandetta abandoned the elbow,” he pointed out.

On the other hand, federal deputies of the opposition to Jair Bolsonaro took advantage of the space on the networks to highlight the controversial speeches of the former minister in the conversation with the senators. “Mandetta, once again, talks about the negative interferences of the ex-minister of Foreign Affairs, Ernesto Araújo, in the international meetings against Covid in which Brazil participated”, affirmed Marília Arraes (PT-PE). Deputy Fernanda Melchionna (PSOL-RS) classified the so-called “parallel counseling” of the president in relation to a medication as “very serious” and “absurd”. The leader of the PT bench in the Chamber, Bohn Gass, used his own social network to publish a series of questions and answers asked by the senators to the former minister about China, chloroquine and vaccination.

The rapporteur of the #CPIdaCovidsenator @renancalheiros question:
– Was there any disagreement, on the part of the President of the Republic, in relation to his position in defense of social distance?
The deponte, a former health minister, @lhmandetta answer back:
– Sim.