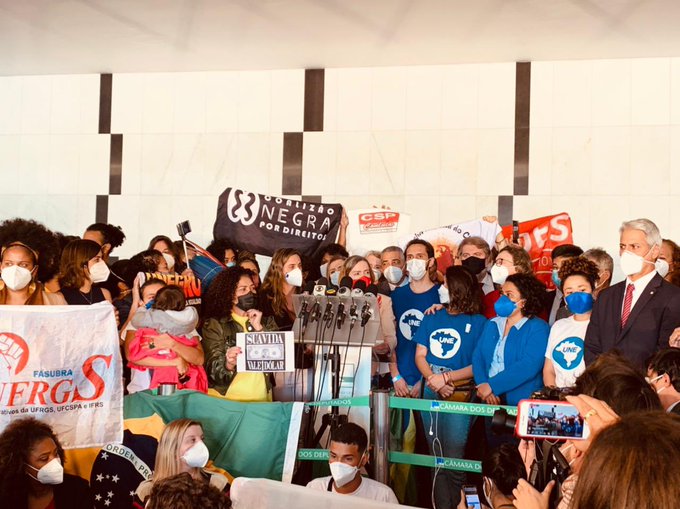 The document cites 21 accusations against the president and brings together 46 signatories, including former allies such as Joice Hasselmann and Kim Kataguiri

Parliamentarians, civil society entities and social movements filed this Wednesday, 30, at the Chamber of Deputies, a “super order” of impeachment of President Jair Bolsonaro. The document has 46 signatories and gathers arguments already presented in more than 100 requests for the president’s removal. Twenty-one accusations of alleged crimes were cited, including recent allegations of bribery in the purchase of vaccines against Covid-19. After filing the super request, lawmakers and representatives of social movements met at a press conference. Among those present were the national president of the PT, Gleisi Hoffmann, opposition leader in the Chamber, Alessandro Molon (PSB-RJ) and other left-wing deputies such as Talíria Petrone (PSOL-RJ) and Benedita da Silva (PT-RJ). Right-wing parliamentarians like Kim Kataguiri (DEM-DF) and Joice Hasselmann (PSL-SP), which were already allies of Bolsonaro, also spoke at the event and asked for the president’s removal. The opening of the impeachment process depends on the president of the Chamber, Arthur Lira, who has sometimes said that he does not see political conditions for the process. Gleisi Hoffmann, however, said the signatories will push for acceptance. “This super request is the result of the effort of political actors, social entities, personalities and civil society of different hues who in common want to rid the country of a president who, in addition to not being able to govern, leads the country to disaster,” he said .