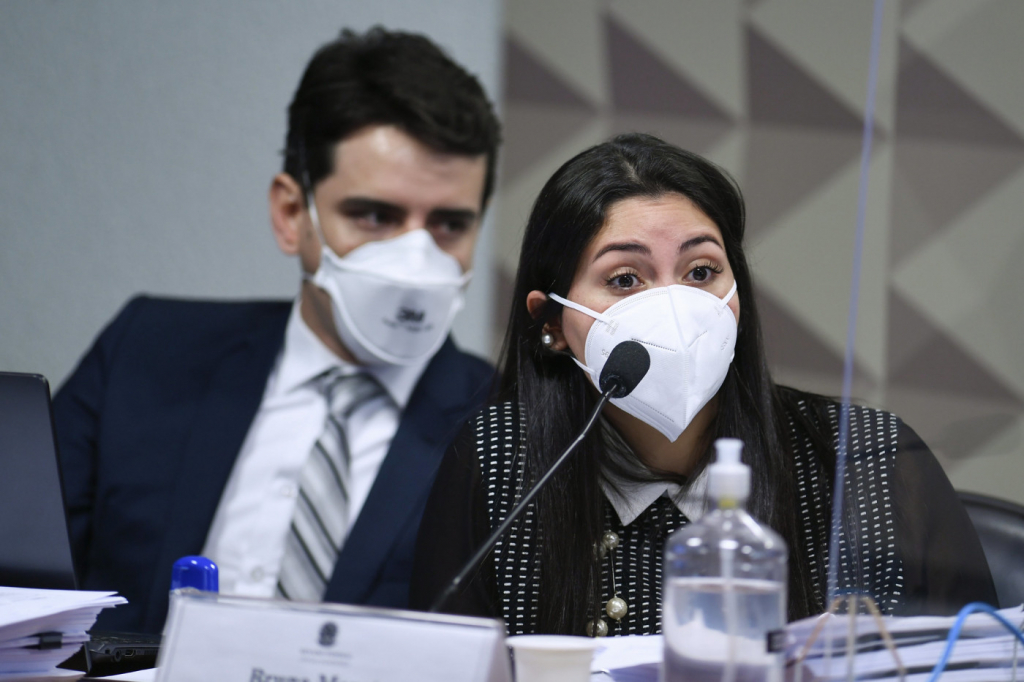 To the CPI, Bruna Morato reaffirmed that the company’s doctors did not have autonomy and were punished for not recommending drugs that were proven to be ineffective for the treatment of the disease.

Edilson Rodrigues/Senate AgencyA lawyer for doctors at Prevent Senior, Bruna Morato testified this Tuesday, 28, to the CPI of Covid-19

In testimony to CPI to Covid-19, The lawyer Bruna Morato, who defends 12 doctors and former doctors of the Prevent Senior who prepared a dossier with complaints about the company’s practices, said, on Tuesday, 28, that the direction of the health operator sought the “parallel cabinet” it’s the Ministry of Economy to draw up an anti-lockdown “pact” that would not harm the country’s economic situation. “According to information that my clients passed on to me, Pedro Batista Júnior was informed that there was a group of doctors advising the federal government that had a connection with the ideas defended by the Ministry of Economy. There was a plan so that people could take to the streets without fear”, said the deponent. The first attempt at rapprochement would target the then Minister of Health, Luiz Henrique Mandetta. According to the lawyer, however, the incumbent, who left office in April 2020, “did not give this opening”.

On March 31 of last year, Mandetta criticized, at a press conference at the Palácio do Planalto, the Sancta Maggiore, which belongs to the operator. He stated that there was a high rate of deaths among the elderly at the hospital, adding that he was studying the possibility of carrying out an intervention in the company’s units. The minister left the Ministry of Health on April 16, involved in disagreements with President Jair Bolsonaro, among which were related precisely to “early treatment”. The doctors responsible for the dialogue between Prevent and the federal government, said Bruna Morato, were Nise Yamaguchi and Anthony Wong, in addition to virologist Paolo Zanotto. The three are appointed as the main members of the parallel cabinet. Zanotto even suggested to the President of the Republic that the Planalto Palace create a “shadow cabinet” (shadow cabinet, in free translation). “There was an ideological alignment because they said the economy could not stop. They [o governo] they had to grant hope so that people could go out onto the streets. And that hope had a name: hydroxychloroquine”, said the lawyer.

In the hearing, Bruna Morato also stated that the Prevent Senior doctors did not have the autonomy to work. The statement represents a counterpoint to what was said last week by Pedro Batista Júnior, executive director of the operator. According to the dossier sent to the CPI, to which the Young pan had access, the guidance came from the top of the company. “Guys, good night. Good on-call everyone and I emphasize the importance of prescribing flutamide 250mg for all patients admitted. We are very excited about the patients’ improvement. Thank you all”, wrote cardiologist Rodrigo Esper, from Prevent, in a WhatsApp group. The lawyer also highlighted that the patients did not know they would be made of “guinea pigs”. “The doctor told the elderly patient that he had good treatment and that he was going to start”. They said: ‘If you want to participate in this treatment, you need the ok’. But they didn’t know they would be made from guinea pigs”, he reported. Responsible for receiving the dossier against Prevent, Senator Humberto Costa (PT-PE) stated that the lawyer’s testimony was “devastating” and “demolition”. “Your landlady is doing good to Brazil and to the public health of that country. You and the doctors who chose you as patron of this cause. I have hope and certainty that we are not going to let this go unpunished”, said the PT member.

The deponent also said that Anthony Wang and Regina Hang, mother of the pocketnerist businessman Luciano Hang, owner of the Havan store chain, were subjected to the use of drugs that were proven to be ineffective for the treatment of the disease. In a video released on their social networks, however, Hang, who will testify on Wednesday, 29, says that his mother could have been saved if she had used the “Covid-kit”. “According to the record, she [Regina] made use of preventive treatment. The prescription is that she previously received the medications”, he said. “The evolution of the medical record shows that she was hospitalized by Covid and all the diseases she had as a result were registered,” he added. According to Morato, Regina’s death certificate was manipulated, because the mention of the coronavirus as an initial disease was omitted. “The death certificate and the death certificate have the same information. However, they disagree with the Ministry of Health’s guidance that should have Covid-19 as an initial disease”, he explained. Wong’s case, according to the version presented to the senators, is even more serious. Infected with the disease, he would have been admitted to a ward dedicated to patients with heart disease. This would be a way of trying to make up the actual number of patients with coronaviruses seen at Prevent Senior’s units.

Intervention by a government dispute

A statement by senator Marcos Rogério (DEM-RO), a government congressman, caused a stir in the session. The ally of Palácio do Planalto stated that the CPI of Covid-19 should listen to the doctors who prepared the dossier and not the lawyer who represents them. “It seems to me that a labor dispute is being dragged to the CPI. It is a deviation from the purpose of the CPI’s role”, he stated. “Why didn’t the doctors come?” asked the DEM politician. The vice president, Randolfe Rodrigues (Rede-AP), reacted: “Labor dispute? What we have here is the testimony of a slaughter. Look at the level of government: find labor disputes in people’s deaths”. Senator Fabiano Contarato (Rede-ES), Chief of Civil Police, mocked his colleague’s speech. “Senator Marcos Rogério missed the penal procedure class. There are direct and indirect witnesses. You missed the criminal procedure class,” he said. The chairman of the commission, Omar Aziz (PSD-AM), guaranteed the floor to the deponent, who replied to Rogério: “This disproportionateness that you have in your attempt to disqualify the complaint only shows that you do not have the technical condition to try to contest the facts ”.