Much of the transportation system that collapsed during the Corona period has recovered. More than 65 per cent of Indian Railways trains have also started running. South Central Railway in the name of special trains in the background of Kovid

Railway Passengers: Most of the transport system that collapsed during the Corona period has recovered. More than 65 per cent of Indian Railways trains have also started running. In the wake of Kovid‌, the South Central Railway said it was restoring trains in phases under the name of special trains. There were 291 express trains running from the zone before Kovid. Of these, 170 trains have been restored so far in the name of special trains. Reservations are fine on passenger and express trains, but for non-reserved i.e. general ticket, passenger issues remain the same. The railway ticket reservation system, which was limited to online in the wake of the Kovid lockdown, has now also started offline at all stations.

According to corona guidelines, social distance needs to be adhered to. But the congestion of ticket counters is increasing day by day. In such a situation, Indian Railways has taken a decision to eliminate the issue of reservation.

Ordinary tickets can be deducted from the mobile app

The Zonal Railway has suggested that a mobile application be utilized for booking tickets in zones where reservation facility is not available. Indian Railways is offering the facility of booking unreserved tickets through the UTS ON MOBILE app. 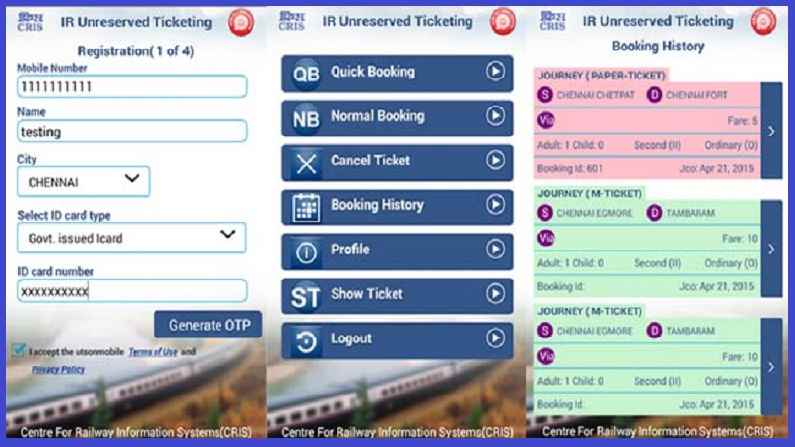 Zonal Railway can implement this facility for passengers

In a release issued by the Ministry of Railways, it was decided that passengers should not be inconvenienced in booking non-reserved tickets and that social distance can be maintained at the booking counter when purchasing tickets. Through the UTS On Mobile App facility, travelers can get their own tickets. Orders have been issued to all zonal railways in this regard. Zonal railways have the right to implement UTS mobile app services in their area for unreserved train services.

Western Railway has reported a loss of about Rs 5,000 crore due to the Corona crisis. Western Railway General Manager Alok Kansal said the impact would be felt on all services. Kovid said many people are still not ready to travel by train for fear of the virus. The coaching trains (passenger) segment is facing a loss of Rs 5,000 crore in annual revenue due to the corona crisis.

Ten per cent of the trains currently running are running with occupancy. The GM said the Western Railway had operated about 300 passenger trains before the epidemic. Railway stopped passenger trains across the country last March in the wake of the Corona-inspired lockdown. He said 145 passenger trains were currently in operation and more would be made available in the coming week.

Kovid clarified that in view of the guidelines, passenger trains are currently being run as special trains and only those with reservation tickets are allowed to travel. During the lockdown, 1,234 labor trains were operated under the Western Railway from May 1 to May 31, bringing 19 lakh people to destinations in various states.

Share
Facebook
Twitter
Pinterest
WhatsApp
Telegram
Previous articleAmid accusations against an “incompetent” government that “came out of the closet”, a state of emergency was approved until March 16 – ZAP
Next articlePfizer studies whether 3rd dose of Covid-19 vaccine is effective against new variants – Prime Time Zone