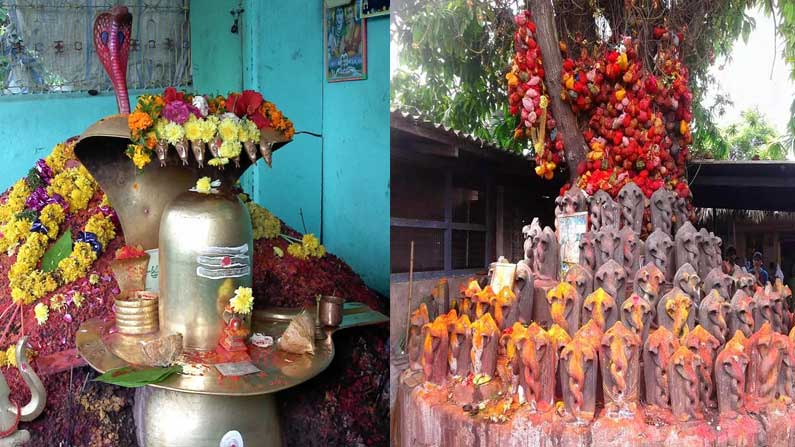 According to our mythology there are three gods. Each deity has its own uniqueness. However, Subramanian, the son of Shiva, expressed his uniqueness among the deities. Karthikeyan to solve difficulties after Harihars ..

Subrahmanyeswara Temple In Mopidevi: According to our mythology there are three gods. Each deity has its own uniqueness. However, Subramanian, the son of Shiva, expressed his uniqueness among the deities. Kartikeya is said to have worshiped a large number of people in some places after the Harihars. Subrahmanyeshwara, who is always worshiped by devotees as a six-faced Swami, is worshiped by devotees who have a serpent bug .. Young men and women who are late for marriage .. Most of such Subrahmanyeshwara Swamy temples are worshiped in South India .. Mopidevi Kumarakshetra in Krishna district is flourishing as a shrine standing opposite the famous temples .. This is a must visit place on the banks of the River Krishna in the Sahyadri.

Myth of the place:

Mount Vindhya boasted with pride and penetrated the sky, blocking even the passage of the sun. Nature froze. Planets have stopped. The Brahmadi deities asked Agastya Maharshi, who thought that only Agastya Harshi could prevent this catastrophe. With this, the sage learned all about yoga and realized that if he left Kashi now, he would not be able to return to Kashi. Agastya Muni set out for Dakshinapatha with Lopamudra. The Vindhya mountain on the way noticed the arrival of the sage and bowed down. Agastya set out towards Dakshinapatham, keeping Kashi Vishalakshi and Vishwanath in mind, urging him to remain as he was until he returned. The pious couple purified the holy Godavari area and entered the Krishna shores. He visited Kanakadurgamata and Srikakulandra Mahavishnu and reached Vyaghrapuram.

The name came out of the sage’s cell effortlessly. The whole place was covered with mounds. Lopamudra Devi, a group of disciples followed him. He observed the Divine Glory from an early age and explained to the disciples that this was the Subramanya Kshetra, which was the fruition of Bhukti Mukti. Kumara Swami .. Subrahmanyeshwara Swami is the name .. Mandavyudane cleared the doubt asked by the disciple. Kumaraswamy told the disciples the reason for doing penance in the form of a snake.

Agastya, Sanathkumara and Sanathsu Devars are always five years old and Digamburulai is worshiped. Once reached Kailasa for Parameswara Darshan. When Lord Shiva was absent at that time, only Parvati and Kumaraswamy were present. At the same time Lakshmi, Saraswati, Sachi, Swahadevi and other goddesses came to see her. Kumaraswamy could not stop laughing when he saw these inanimate objects and beautiful beauties. Parvati noticed this .. Kumara! Why are you laughing… Don’t those penances look like me? Not like your father? Is there any difference? She asked. Kumaraswamy, who was deeply remorseful for his behavior at his mother’s words, apologized at her feet. Karthikeyan, who had gone for penance, reached this place and started penance himself in the form of a snake. Augustus told the disciples that this was the place, and placed the Shivalinga on the birthplace of the radiance.

In time, there was a potter named Veerarapu Parvatas near the place. He is a great devotee of Shiva. The Devasenadhipati appeared to him in a dream and told him about his whereabouts and asked him to build a temple and enshrine it there. So he built the temple. He used to make Shiva’s favorites out of clay and store them in the temple. This shrine was known as Mohinipuram. Over time it settled as Mopidevi.

Snake wrapping potion in the sanctum sanctorum. The Shivalingam rests on it. Milk is poured during the anointing and rites in the hole below the potion. Mopidevi Temple is famous for childless couples, Sarpa Dosha Nivarana Puja, Rahu Ketu Dosha Puja and Dosha Puja, for vision, ear related problems, prevention of skin related diseases, good spouse and Annaprasana. Devotees strongly believe that if a couple sleeps in this temple one night, they will have children. Hence, Mopidevi is thriving as a glorious shrine.