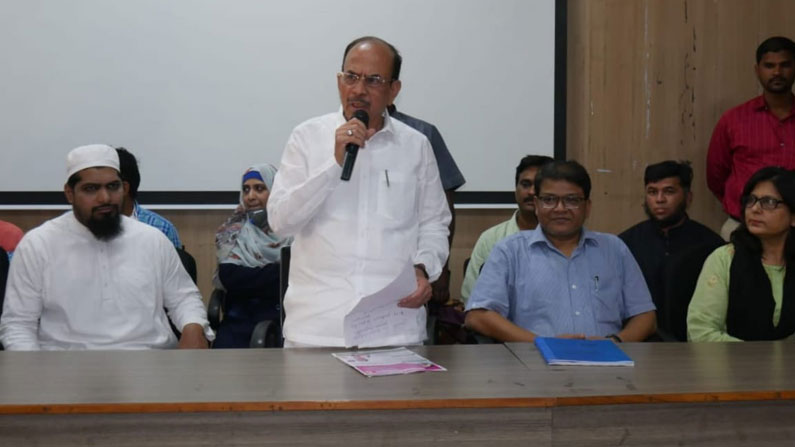 The campaign for the graduate MLC elections in Telangana is over. All the parties that have been campaigning for so long are now voting.

The campaign for the graduate MLC elections in Telangana is over. All the parties that have been competing in the campaign for so long are now competing to entice voters. Polling will continue from 8 am to 4 pm tomorrow. Candidates are in the process of appeasing graduate voters in other ways.

State Home Minister Mohammad Mahmood Ali has demanded that a large number of graduate voters exercise their voting right during the MLC polls on May 14 to increase the voting percentage so that the TRS candidates can win. Speaking at the Maulana Azad Urdu University in Hyderabad on Friday, the Home Minister said that the graduate vote was an extraordinary opportunity and by taking advantage of it, their issues could be heard in the legislature. He said that by registering a maximum voting percentage, MLCs could open the door for the solution of the problems of graduates and youth.

Educated people are voting for TRS MLC candidate from Hyderabad-Ranga Reddy-Mahabubnagar districts. The Home Minister asked Vani Devi to win. He said that all the graduates should try to get a large number of votes so that they can exercise their constitutional right to vote properly. He said the issues of youth, unemployed as well as employees and graduates would be discussed in the council if the best and most effective emcee is selected and sent to the legislature.

Maulana Azad University is a university with a great reputation, India’s first Minister of Education Maulana Abul Kalam Azad praised the personality. He said that he worked till his last breath for the welfare of India. Referring to the current situation of farmers, he said that Telangana farmers were very happy compared to farmers in other states and reminded that the TRS government was working hard for the farmers apart from the farmer bond and farmer insurance cooking schemes. State Chief Minister Kalwakuntla Chandrasekhar Rao said that in the TRS government, farmers’ suicides have stopped across the state and the aim is to ensure that farmers here live a confident and dignified life.

Home Minister Mohammad Mahmood Ali said that the TRS party has fielded an effective candidate S Vanidevi and so far she has done a great service to the youth, the unemployed and the graduate students without any political support. She has repeatedly organized job fairs and asked young people to send the right candidate to the council by voting for her. The Home Minister said that the state of Telangana has been developing steadily for the last seven years under the leadership of Chief Minister Kalwakuntla Chandrasekhar Rao.

He said that today the state of Telangana has a special place in the country and apart from welfare schemes in Telangana, the TRS government has taken several measures for the welfare of Muslim minorities and women. He said that foreign companies were flocking to Telangana as the security situation and climate in the state were good, adding that they would contribute employment to the people of Telangana as well as strengthen the economy of Telangana. Also participated in events in Ramanthapur.

The counting process should be carried out in an armored manner .. Anantapur Collector‌ Gandham Chandradu command