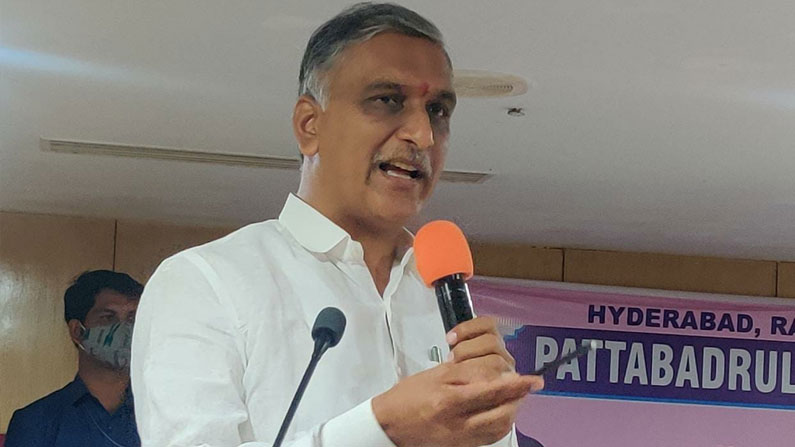 Minister Harish Rao participated in a meeting held at Hotel Tourism Plaza in support of Mahabubnagar, Rangareddy, Hyderabad graduate MLC election TRS candidate S. Vani Devi. The event was attended by Minister Harish Rao along with State Planning Commission Vice President Boin Palli Vinod Kumar. Elections, votes are always there. Harish Rao said it was up to the graduates to decide why they are voting in a democracy.

We are all here because of the constitution written by Dr. BR Ambedkar. But today, Minister Harish Rao expressed concern that a conspiracy was being hatched to amend the constitution written by Dr BR Ambedkar. Those rights warn that hundreds of years will go back if the same happens as the blackmail attempt takes place. Public sector companies are being privatized. A ministry was set up to remove the land sector companies. Eddewa said the BJP needed the ministry to set up public sector undertakings but the credit for setting up the department to remove them would go to them.

“If LIC and central government agencies are private, we will not have rights and reservations. It will be unfair to SCs and STs,” said Minister Harish Rao. There are many companies that are heritage assets. But the BJP government is selling them. There is a conspiracy going on to lift reservations. Ambedkar is undermining the spirit. Graduates are warned to think once and for all.

I have brought Jivo No. 59 in the Irrigation Department with the orders of Chief Minister KCR in Telangana state. We have brought in to allocate workshops on population basis in all working agency. The Telangana government is the only government that has brought this organism. Our TRS government is credited with enforcing the SCST Commission to go and give 21 per cent work if there is a complaint that it is not being implemented in Singareni. We have brought a number of self-employment schemes. Dickey was strengthened. The input subsidy from the government was a power subsidy. The Ambedkar statue is being erected in the heart of Hyderabad at 125 feet by 146 feet. That is why work is being done on a war footing, said Minister Harish Rao.

SC ST Self Respect Buildings, Dalit Study Circle Buddhavanam will be launched soon. SC ST girls find it very difficult to study. When the TRS government came, 30 ST Women’s Residential and 14 SC Degree Residential Colleges were set up. 268 Gurukuls were formed. Previously we did it up to its inter which is up to 10th class. 46 lakh students are studying in SC residential schools. Chief Minister KCR is giving utmost priority to education. We have introduced an overseas scheme for SC / STs to study abroad and provide Rs. 20 lakhs. Harish Rao said there was no such scheme anywhere in the country.

You all need to think about central government policies. According to Ambedkar, the principle of mobilize, teach and fight must work. Do not be fooled by the provocative statements of the BJP. Do not believe in lies. The TRS government is the government that brought reservations to the SCs. Women became chairmen of market committees in Telangana today. PV Vani Devi Nigarvi. Made lakhs of graduates. There was only one woman in the 93 contestants. All women should vote for Vani Devi. Harishrao appealed to be sent to the Legislature.

Unemployed people have been cheated by the Central and State Governments.