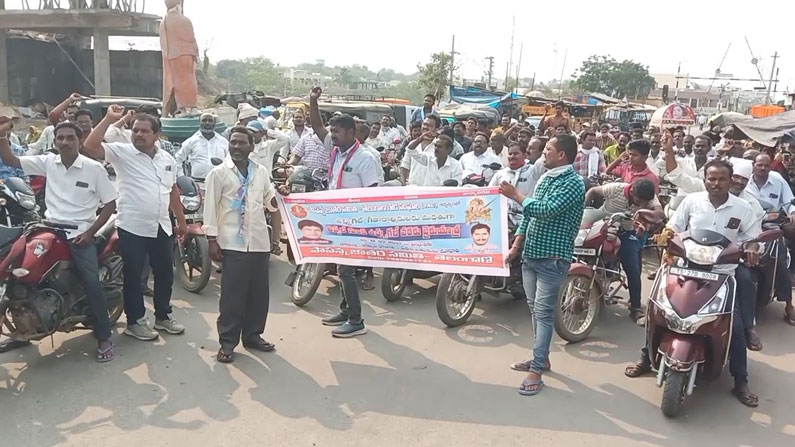 The masonry workers hit the road to solve their problems. Huge bike rally from Hyderabad Uppal X Road to Uppugal in Janagam District ..

The masonry workers hit the road to solve their problems. A huge bike rally was organized from Uppal X Road in Hyderabad to Uppugal in Janagam district. They protested for 18 days, demanding that the government ignore their demands for justice.

From Uppal X Road to Uppugallu to show solidarity with the lyricists who went on a hunger strike to disrupt the reservoir works. Organized a bike rally with 200 bikes. Telangana Papanna Janajatara Samithi and Uppugallu Gowda workers organized a bike rally. The slogan was to address the assurances given by the government.

Going into details, Gita workers, who are completely losing their jobs in the construction of a reservoir in Uppugallu village in Jafargarh zone of Janagama district, have been protesting for the last 18 days demanding fulfillment of the promises given to them by the government. In this context, to express solidarity with the Gowda community, Hyderabad Uppal X Road to Uppugal Papanna Jana Samithi organized a bike rally under the auspices of the Gowda Association and expressed solidarity.

Later, Papanna Janajatara Samithi president Srinivas Gowda said that the Uppugal Gowda community was not asking for Gontemma’s wishes. He said it was sad that no one cared if the protests were to fulfill the promises given by the government in the past. He warned that the assembly would be besieged if not resolved within 24 hours.

Stripe workers who previously blocked the concreting
The concreting of the Uppugallu Reservoir in the Zafargarh Zone of Warangal District has gone on amid intense tensions in the past. Gita workers have in the past prevented the concreting from starting work until a clear assurance is given to support those losing their jobs due to the reservoir. On the one hand, while the Gita workers were protesting, the then Tribal Welfare Minister Chandulal laid the foundation stone for the reservoir works and left.

The government has sanctioned Rs 300 crore to build a reservoir adjoining the Uppugallu village as part of the Devadula project. Due to the construction of this reservoir, the farm lands of the farmers of Uppugallu village as well as the palm trees of Gita workers are being inundated. The government has already conducted a survey on flood-prone lands and compensated some farmers who lost their lands. However, the government has not taken any decision on the issue of palm trees. As a result, Gita workers who depend on these for their livelihood are losing their jobs.

Unaware of this, the government started construction work on the reservoir. A large number of Gita workers protested with their knees. They are demanding that work be started only after a clear assurance from the government to support those who are losing their jobs due to palm trees.