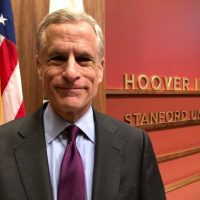 Dallas Federal Reserve Chairman Robert Kaplan announced his retirement from his position, after the recent controversy over his stock trading.

Kaplan explained that he decided to step down from his position on the eighth of next October because the recent focus on his financial disclosure may become a source of distraction for the work of the central bank.

And the Federal Reserve President in Boston, Eric Rosengren, announced today that he would step down from his position on September 30th, about nine months earlier than he had planned, due to health concerns.

The issue of “Kaplan” and “Rosingren” buying and selling securities emerged in the last period, which caused sharp criticism amid fears of a potential conflict of interest, while the two Fed members defended that the matter did not violate the rules and ethics of the bank.

The two Fed officials recently announced that they will sell their individual stocks by the end of this month, to avoid any signs of conflict of interest.

The article was written in the Stock Exchange newspaper, the head of the Federal Reserve in Dallas stepping down from his post after the stock market crisis.