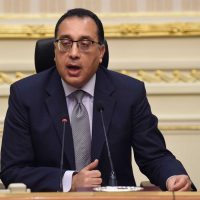 Alok Sharma: We discussed how the UK and Egypt are working together to address the challenges of climate change

British Ambassador in Cairo: Egypt has made amazing progress in its production of renewable energy

Dr. Mustafa Madbouly, Prime Minister, met today, Alok Sharma, Envoy of the British Prime Minister and Chair of the 26th session of the Conference of Parties of the United Nations Framework Convention on Climate Change.

The meeting was attended by Dr. Yasmine Fouad, Minister of Environment, Sir Geoffrey Adams, United Kingdom Ambassador to Cairo, and Ambassador Mohamed Omar Gad, Director of the Environment and Sustainable Development Department at the Ministry of Foreign Affairs.

Madbouly praised the cooperation between Egypt and Britain in the field of adaptation to the effects of climate change, and the joint leadership of the two countries for the alliance, which was launched last month, in this field.

The Prime Minister reviewed the national position on the outstanding issues in the climate change negotiations, stressing the importance of making tangible progress on the issue of financing, to enable developing countries to implement their obligations under the framework agreement, and to pay more attention to the issue of adaptation to climate change, stressing the need for the next COP to adopt an agenda Balanced taking into account the interests of developing and developed countries alike, and based on the main principles of the United Nations Climate Change Convention.

He also expressed Egypt’s commitment to continue efforts to make climate change negotiations a success, which was recently embodied in the submission of an official offer to host the twenty-seventh session of the Conference of the Parties to the Framework Agreement in Egypt, in November 2022.

The Prime Minister referred to the decision of the National Council for Climate Change to start preparing the national strategy for climate change, referring to the successful Egyptian experience in the field of renewable energy projects, and the initiative to issue green bonds to finance sustainable development projects.

Madbouly also referred to the initiative to replace old cars to work with natural gas, and to encourage the transformation of cars that operate with electricity, as one of the important tools of the Egyptian state in achieving sustainable development goals and reducing emissions.

For her part, Dr. Yasmine Fouad, Minister of Environment and Chair of the Conference of the Parties to the Convention on Biological Diversity, highlighted the fact that Egypt has adopted the concept of green recovery and has taken many measures in this context, foremost among which is the issuance of green bonds, as the first country in North Africa and the Middle East to establish By issuing these bonds to finance environmentally friendly projects, and adopting environmental sustainability standards for national investments and projects, in the state’s plan starting from 2021-2022.

Alok Sharma stated: “It was my pleasure to meet the Prime Minister, Dr. Mustafa Madbouly, in the presence of Dr. Yasmine Fouad, Minister of Environment; To discuss how the UK and Egypt can work together to address the challenges of climate change. We have come a long way since our joint call for action on climate change and adaptation, to which 120 other countries responded, and we thank Egypt for its leadership and continuous support, and in the lead up to the COP26 conference, I look forward to more joint work to motivate international partners to act, raise our collective ambition and empower Effective and tangible results ”.

For his part, the British Ambassador to Egypt Sir Geoffrey Adams said: “Egypt has made amazing progress in its production of renewable energy, and has benefited greatly from its chairing the COP14 Conference on Biological Diversity. The vital issue of biodiversity has been directly linked to climate action. Mr. Sharma and I have discussed these issues with Prime Minister Dr. Madbouly. We are proud to support Egypt in its energy transition, and partner together to rebuild better, stronger and more environmentally friendly from the Coronavirus. ”

The article The Prime Minister: Egypt is cooperating with Britain to make the Conference of Parties to the Climate Change Agreement a success.