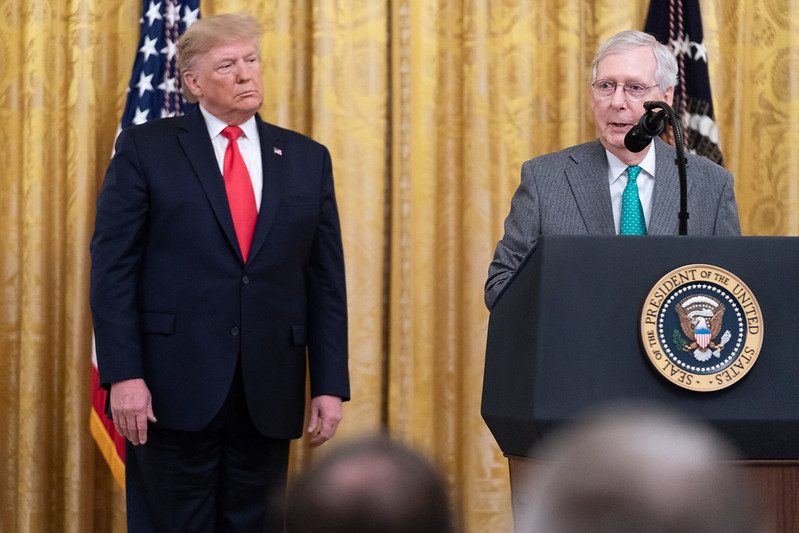 The ups and downs relationship between the two turned sour after McConnell acknowledged Joe Biden’s victory. Trump now wants a Republican to run against McConnell for the position of party leadership within the Senate.

After having been one of the main promoters of Donald Trump’s political agenda, Mitch McConnell is no longer in the former US President’s good graces. Second advances the Wall Street Journal, Donald Trump has been talking to Senators and allies about a attempt to dethrone Mitch McConnell of the Senate Republican leadership.

However, Senators are not interested in betraying the current leader of the Republican minority in the upper house of the US Congress. Anyway, discussions can accentuate the divisions between Trump, who remains the most influential Republican figure, and McConnell, currently the party member elected to hold the highest office.

The relationship between Trump and McConnell has seen many ups and downs. Although there were some stings during the term on Trump’s side, the then leader of the Senate Republican majority was one of his greatest allies.

McConnell was the key that allowed Trump to appoint three judges to the Supreme and thus widen the conservative majority, especially in the choices of Brett Kavanaugh and Amy Coney Barrett.

Donald Trump also pointed a huge number of judges to the federal courts because McConnell had blocked Obama from making the choices and left the vacancies ready to be filled by his successor.

A few days after Kavanaugh’s nomination and before midterm elections in 2018 – where McConnell’s Senate seat was at risk – Trump held a rally in Kentucky, the state McConnell represents, and heaped praise on him. “I know tough people. He’s tough, he’s tough in the Kentucky way“he stated.

But the honeymoon was short-lived and the atmosphere between the two turned sour after Trump’s defeat in last year’s presidential election. Accusations of electoral fraud showed the former president who was willing to risk everything for loyalty and for votes – since Trump remains a popular figure among conservative voters – and those who have not turned their backs on political conventions to support him.

Besides Mike Pence, Trump’s number two in the White House, McConnell also did not support the then President’s claims not to confirm Joe Biden’s victory. In a speech to the Senate, Mitch McConnell said he expected “a different result”, but he gave the congratulations to the Democratic candidate for having won the election.

After Trump’s supporters raided the Capitol on January 6, McConnell also said that the former president was “practically and morally” responsible for the insurgency. “They did it because heard crazy lies from the mouth of the most powerful man on Earth because he was angry at having lost an election,” he accused. However, McConnell voted against Donald Trump’s impeachment trial.

The two also disagreed on a political level this year. McConnell joined 18 other Republican Senators and voted in favor of the infrastructure bill, which Trump was trying to sabotage behind the scenes. The former head of state even said that the approval of the law makes “Republicans look weak, foolish and dumb“.

“Joe Biden’s infrastructure law is a disgrace. If Mitch McConnell had been smart, which so far we haven’t seen evidence, he would have used the debt limit letter to negotiate a good infrastructure package,” criticized Trump.

Division in the party can wreak havoc in the interims

The anger between the two figures could wreak havoc in the mid-term elections scheduled for next year. Republicans hoped to capitalize on Biden’s declines in popularity as troops pulled out of Afghanistan to build energy around the campaign.

Remember that the Republicans lost the Senate in the last presidential ones and currently do not control any legislative body. Although there are 50 Senators on each side, Democrats were able to regain the organ because Vice President Kamala Harris also chairs the Senate and ties the vote.

In a recent interview, Trump declined to discuss whether he was recruiting candidates to run against McConnell, but let slip that the wanted to see out of the lead party within the Senate, a position he has held for nearly 15 years. “I think he’s very bad for the Republican party,” Trump said.

McConnell did not comment on the former president’s statements. Several Senators have already shown that they support the current leader, such as Tommy Tuberville. “I won’t get involved in this fight“, stated Tuberville, who was one of Trump’s greatest allies.

Republican Senators choose their leadership every two years. McConnell is now in his eighth term at the head of the party, which does not end until January 2023. The Kentucky Senator has secured re-election as he has allies on several committees that fund the campaigns of colleagues in the party, unlike Trump, who has not helped other Republicans’ campaigns.

Senator John Kennedy also thinks it unlikely that Trump will be able to race McConnell, comparing the odds to that of a donkey learning to fly. “I don’t see this happening realistically,” he concluded.