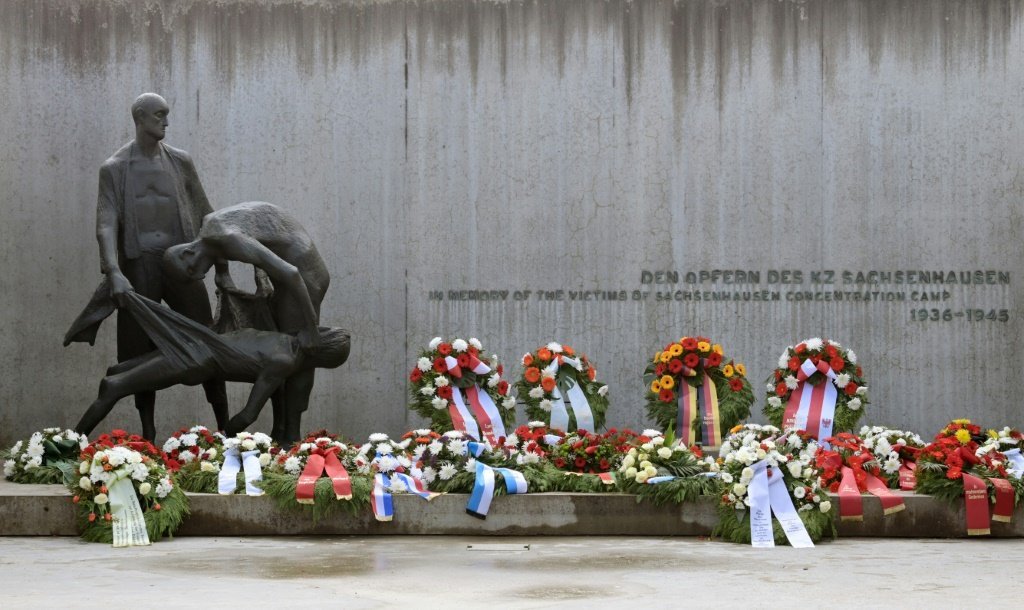 Wreaths deposited in the Sachsenhausen concentration camp in Oranienburg, north of Berlin, on April 18, 2021, on the occasion of the anniversary of the liberation in 1945 (David COURBET/AFP)

A former 100-year-old concentration camp guard started being tried this Thursday (7), at Germany, and became the oldest person to have to answer in a court for Nazi crimes.

Josef S., a former corporal in the “Totenkopf” division of the SS, is accused of “complicity in the death” of 3,518 prisoners in the Sachsenhausen concentration camp, near Berlin, between 1942 and 1945.

The trial takes place in Brandenburg an der Havel, in eastern Germany, with the presence of the accused, who uses a walker and is at liberty.

Attorney Stefan Waterkamp has announced that the client will not speak about the charges.

“The accused will not speak. He will only give information about his personal situation,” he said.

Josef S. was 21 years old when the acts for which he is judged began. He is suspected of shooting Soviet prisoners and “aiding and abetting gas deaths.”

From its opening in 1936 until its release by the Soviets on April 22, 1945, camp Sachsenhausen received nearly 200,000 prisoners. The majority were made up of political opponents, Jews and homosexuals.

Tens of thousands died of exhaustion due to forced labor and cruel detention conditions.

Christoffel Heijer, 84, is present at the trial. His father joined the Dutch resistance and was arrested in 1941 by the Gestapo. In May 1942 he was shot in the field.

“My mother received a letter from him dated May 3, 1942. When I learned a few days later that he was dead, she cried a lot, and all of his hair suddenly turned gray,” he recalls.

The trial comes a week after the failed hearing of 96-year-old Irmgard Furchner, a former secretary of another Nazi concentration camp.

The first hearing in Furchner’s trial was postponed to Oct. 19, after the old woman tried to flee and spent a few hours on the run on the day the trial began.

Over the past ten years, Germany has tried and convicted four former SS members, extending the charge of complicity in murder to camp guards and other Nazi order executioners. The objective with this is to demonstrate the severity of justice, considered, however, late by the victims.

Josef S. “is not accused of shooting anyone in particular, but of having contributed to these acts by his work as a guard and by knowing that the killings were taking place in the camps,” explained Neuruppin’s Public Ministry spokeswoman. , Iris le Claire.

The accused could be sentenced to a minimum of three years in prison, but the sentence would be symbolic of his advanced age.

In August, a doctor declared the defendant fit to appear at the trial, with the condition that the 22 hearings scheduled until January were limited to a maximum of two hours.

“He is doing well and shows no signs of incipient dementia. It can be said that he is mentally and spiritually very healthy,” Thomas Walther, attorney for 11 of the 16 civil parties to the lawsuit, including seven survivors, told AFP.

For Stephanie Bohra, a researcher at the Berlin Topography of Terror museum, dedicated to Nazi crimes, “these processes are particularly important for the survivors and their descendants. They want justice and the crimes to be solved.”

Other historians and analysts emphasize that these are judgments in which the essential is to rescue memory.

“It’s about confirming that a unified Germany is determined to get to the bottom of the Nazi past, in a context where, since the early 2000s, the memory of the genocide of Jews has moved to the center of national identity,” he said.

In July 2020, a court sentenced 93-year-old former Stutthof camp guard, Bruno Dey, to two years in prison with parole. Another eight cases of former SS members are being examined by different courts across the country.