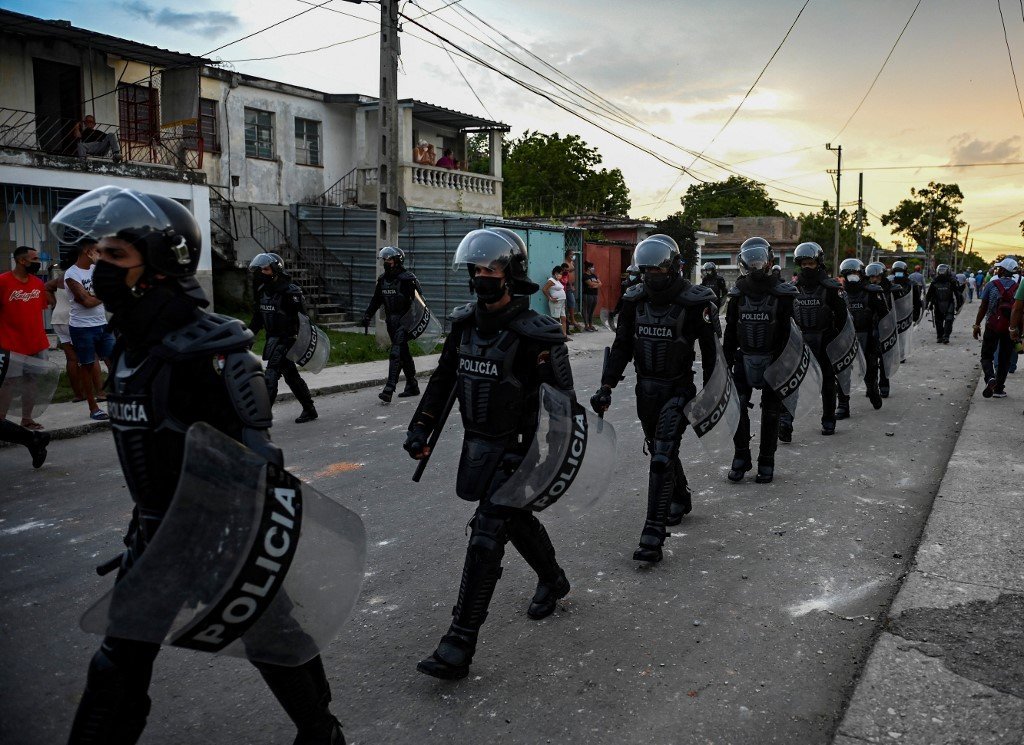 the government of Cuba reinforced policing in the streets of the country while the president Miguel Diaz-Canel accuses Cuban Americans of using social media to provoke a rare demonstration against high prices and food shortages.

The demonstrations in several cities and towns were some of the biggest demonstrations of anti-government sentiment seen since 1994 when thousands of Cubans took to the streets of Havana to protest government policies. The episode became known as “malemonazo” because hundreds of Cubans invaded the Malecón, Havana’s seafront promenade, shouting “Freedom.”

Cuba woke up without mobile internet and with a strong police presence in the streets of Havana, a day after thousands of Cubans took to the streets in protest against the government and the economic and health crisis they are going through.

A journalist from the Spanish news agency EFE said there was a “tense calm” in the streets. With no internet on the island, the journalist says it is difficult to “know for sure” what is going on across the country.

On Monday, 12, dozens of women gathered in front of police stations trying to obtain information about the whereabouts of husbands, children and relatives arrested or disappeared during the demonstrations.

So far, authorities have not yet released an official number of arrests, but there is a provisional list drawn up by local activists that has 65 names in Havana alone.

Among the detainees are well-known personalities such as the artist Luis Manuel Otero Alcántara, the moderate dissident Manuel Cuesta Morúa or the playwright Yunior García Aguilera.

The protests in Cuba are a result of popular dissatisfaction with an outbreak of coronavirus cases and its worst economic crisis in decades as a result of US sanctions imposed by the government of President Donald Trump.

Many young people participated in the demonstrations on Sunday, 11, in Havana. Protests also took place in other parts of the island, including the small town of San Antonio de los Baños, where people opposed power cuts and were visited by President Miguel Díaz-Canel. He entered some houses, where he answered questions from the residents.

The authorities seemed determined to put an end to the demonstrations. Dozens of protesters were arrested, including a prominent Cuban dissident who was arrested trying to participate in a march in the city of Santiago.

Internet service was spotty, possibly indicating an effort to prevent protesters from communicating with each other.

“We saw how the campaign against Cuba was growing on social media in recent weeks,” Díaz-Canel said Monday in a national television appearance in which his entire cabinet was present. “That’s how it’s done: try to create nonconformity and dissatisfaction by manipulating emotions and feelings.”

In a statement on Monday, US President Joe Biden said Cuban protesters were demanding their basic rights.

“We support the Cuban people and their call for freedom and relief from the tragic grip of the pandemic and the decades of repression and economic suffering to which they have been subjected by Cuba’s authoritarian regime,” said Biden.

The US urges the Cuban government to serve its people “instead of getting rich,” added Biden.

Deputy UN Spokesperson Farhan Haq on Monday emphasized the organization’s position “on the need for freedom of expression and peaceful assembly to be fully respected, and we hope that will be the case.”

The demonstrations were extremely unusual on an island where little dissent against the government is tolerated. The last big public demonstration of discontent, because of the economic difficulties, took place on August 5, 1994, thousands of Cubans took to the streets of Havana to protest against government policies, in the first uprising against the regime of Fidel Castro, who took over the power in 1959.

Cuba was facing economic depression after the end of the Soviet Union. Fuel and food were scarce on the island, which faced periods of power outages, making it impossible to use fans in the intense heat, and water pumps.

Last year, there were small demonstrations by artists and other groups, but nothing as big or widespread as what broke out over the weekend.

“We’re fed up with the lines, the absences. That’s why I’m here,” one middle-aged protester told the Associated Press. He refused to identify himself for fear of arrest.

AP photojournalist Ramón Espinosa was beaten by a group of uniformed and plainclothes police; he broke his nose and suffered an eye injury.

“This seems to be a response to the protests fueled by social media,” he said. Twitter doesn’t appear to be blocked, although Toker noted that Cuba has the ability to hack it if it wants to.