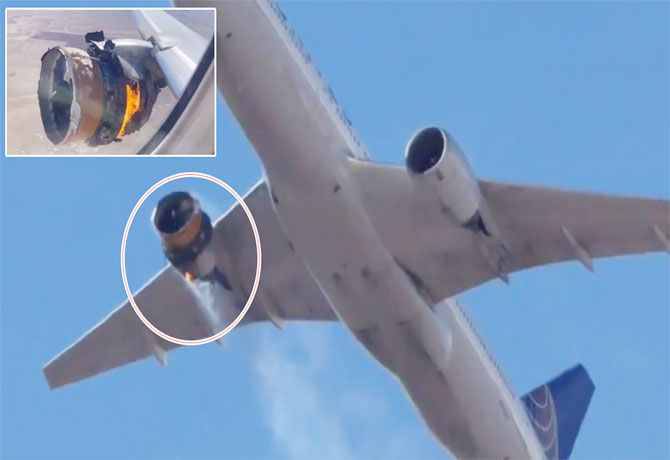 The narrowest missed threat in America

Broomfield: An aircraft engine exploded in the United States and some fragments fell on the outskirts of Denver. The plane carrying the passengers narrowly escaped a major threat. A sudden mechanical failure occurred in the engine while the aircraft was traveling. Recognizing this, the pilot dropped the damaged parts of the engine in an emergency landing. A piece should fall on a house in a short time. But the threat was soon averted. The plane, however, landed safely in an emergency. Authorities said none of the passengers were injured. The United Airlines Boeing 777200 had to make an emergency landing at Denver International Airport.

The incident took place on Sunday. Shortly after the plane took off from the airport, the engine cracked. Recognizing this and re-landing immediately the major threat was averted. But locals were alarmed by the debris falling on the outskirts. The flight was scheduled to fly from Denver to Honolulu. The plane was carrying 231 passengers and 10 crew members at the time of the incident, United Airlines said. The local police department released the footage, which fell under the largest circular sections. Passengers trembled with fear as the plane landed. Knowing that the engine was damaged, he spent time in fear of what would happen to the plane.

A large number of engine wrecks fell very close to a house and they had to run to see if there were any thunderbolts in the house. Passengers, on the other hand, recounted their horrific moments after landing. Shortly afterwards, the engine was found to be damaged while the aircraft was approaching a certain altitude. The crew said a huge explosion in the cabin damaged the engine and caused a large flashlight at this stage. The plane crashed while landing.

Passenger David Delucia said he thought Kramepi would fall to the ground. He said he thought he was going to die and somehow got out. Locals said an explosion was heard on the plane, raising concerns about what might happen to the plane. They said they were frightened by the smoke coming from the plane and then falling under the fragments. Local Tyler Thall said the fragments falling to the ground looked like huge spears to them from below. Suspicions have been raised over the incident, with the result that an engine on the plane was damaged and exploded. However, officials said that nothing can be said about this at present and that all matters will be confirmed only after an investigation.