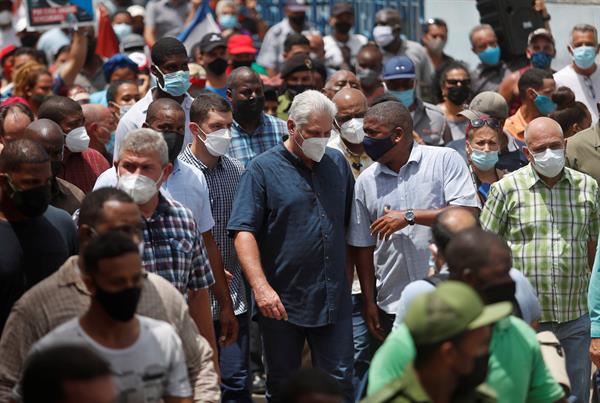 Amid demonstrations against the government, Cuba limited the population’s access to internet and to platforms like Whatsapp, Instagram, Telegram e Facebook, which registered instability on Monday, 12. According to monitoring services, access has been cut off almost everywhere in the island and is aimed at preventing the exchange of information and calls for new protests against the current regime. The leader of the Cuban government, Miguel Diaz-Canel, made a statement and stated that the supporters of the demonstrations will be contributing to “a change of regime that will bring about a system that will not be concerned with the good of the population”. International news agencies also reported that power cuts were registered in some regions of the country. The measure generated negative reactions around the world. THE Inter-American Press Society (SIP) on Monday condemned the arrest and attacks on independent journalists in Cuba during the protests that took place on Sunday and denounced the interruption of the internet service, alleging that the security forces acted “with the clear intention of restricting the freedoms of association, press and expression”.

Thousands of Cubans took to the streets yesterday to protest against the government. There was police repression, resulting in hundreds of arrests and clashes after Díaz-Canel called on his supporters on television to confront the protesters and defend the 1959 Revolution. According to the IAPA, the demonstrations were being broadcast live on Facebook when the service provided internet was suddenly disrupted across the country. The IAPA denounced the use of the state monopoly of Empresa de Telecomunicaciones de Cuba SA (ETECSA) to silence independent journalists. The recent demonstrations “are a reflection of the Cubans’ fatigue with a government that continues to believe that it owns the lives and destiny of its citizens,” Carlos Jornet, president of the IAPA’s Committee on Freedom of the Press and Information, said in a statement.