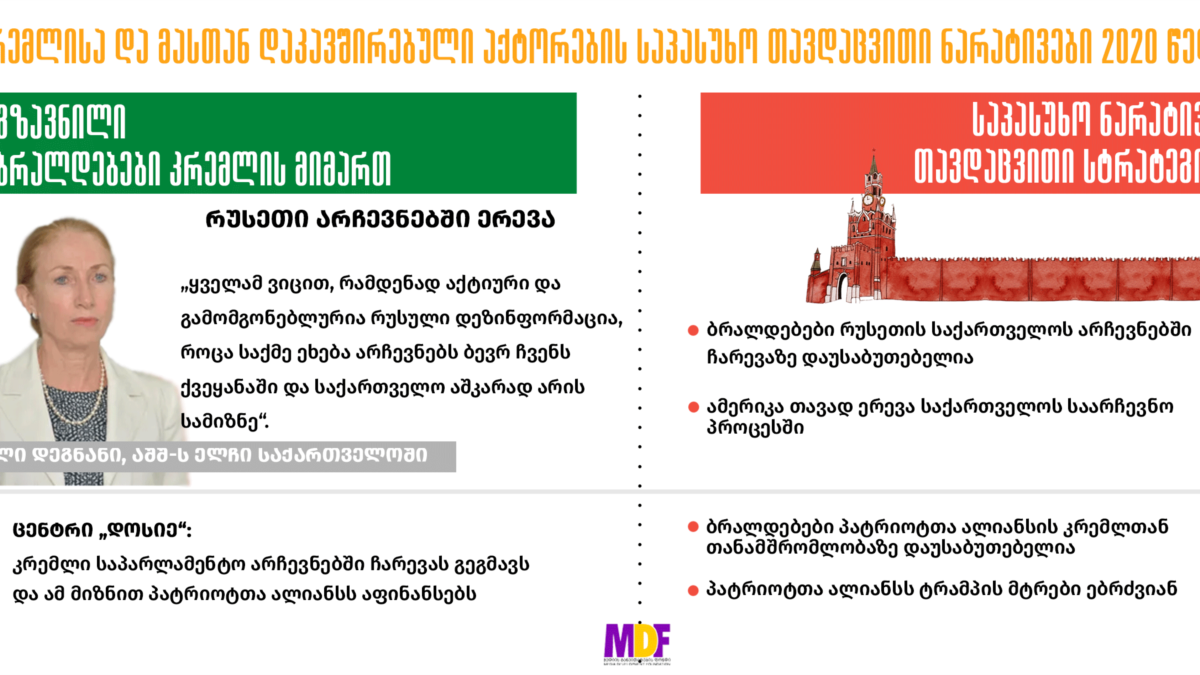 The Media Development Foundation has published a study on anti-Western propaganda and assessed the developments during 2020. Throughout the year, observations on the product of various media outlets revealed the trends and findings that the foundation reflected in its report.

Foundation researchers say anti-Western rhetoric is on the rise. Sentiments towards Russia are clear. The messages to the United States are related to the election process both in Georgia and in the United States.

Tamar Kintsurashvili, head of the Media Development Foundation, told VOA that the American institutions NDI and IRI are also important targets of anti-Western propaganda. “Targeted campaigning in this regard was carried out by the pro-Russian party, the Alliance of Patriots,” said Tamar Kintsurashvili.

“The message was cultivated that the sociological research conducted by these organizations is an interference in the internal affairs of Georgia. “It was an integral part of the election process,” Tamar Kintsurashvili told us, adding that a similar statement, as if research might have an impact on the election process, was made in late 2019 by Bidzina Ivanishvili, the leader of the Georgian Dream.

Anti-Western propaganda says that the United States can not be a model of democracy for Georgia or other countries, because it has no “moral right” to point other countries to adhere to democratic norms. The Media Development Foundation connects this message with the similar opinion expressed by the Deputy Minister of Foreign Affairs of the Russian Federation, Maria Zakharova, and states that it is in full accordance with the messages of the Patriots Alliance.

According to the Media Development Fund, the Russian side also had to move to a defensive position, and this was the case if the West was strict and purposeful. At the same time, Russian “arguments” were voiced in the Georgian-language media.

“It is noteworthy that Kremlin-related actors had to switch to defensive communication when there were relevant messages. Recall, for example, the statement of the US Ambassador, Kelly Degnan, that Russia planned to involve Georgia in the election process; Or the Dossier investigation against the Patriots Alliance. Also, regarding the European Parliament resolution, when the role of the Soviet Union in the Molotov-Ribbentrop Pact was assessed. The reactions that were heard from Putin were also reflected in the Georgian-language anti-Western media. “This is, to some extent, an indication that when there is a response and accusations are heard from the other side, Russia and its actors also have to switch to defensive communication,” Tamar Kintsurashvili told us.

The study also discusses the cases when the rhetoric of the Kremlin and the Georgian government was in unison with each other. “Separate statements were heard from the ruling party as if the West was interfering in our internal processes, and this was happening when criticism was heard from our strategic partners. “Here we have seen a coincidence between Kremlin-related actors and the ruling party,” said researchers from the Media Development Foundation.

“In 2020, we saw a campaign related to David Garej, which was a typical Russian handwriting. Georgian Dream was the main actor when they started legal proceedings against two public officials. This issue, the territorial claims against Azerbaijan and the accusations against the church have created fertile ground for Kremlin-related actors and ultra-right groups to say that not only Russia but all our neighbors are occupiers. Arrows were moving on historical facts. “Obviously, the demarcation of this section is not over yet and it is debatable, but all this was in the nature of a typical dangerous election campaign, which made the society even more vulnerable and reduced the focus on the main threat, which is the Russian occupation and their presence in our country.” Kintsurashvili.

“If there are no institutions, if there is no democratic process and the country is facing vulnerable challenges, it will be easier for Russia to influence,” said researchers from the Media Development Foundation. According to their forecast, based on what we saw on July 5 and beyond, it points to a new reality. Researchers think there will be more dramatic findings in the 2021 study. “We have partially published data on this. When the state does not respond to violence orchestrated by ultra-extremist groups and these groups are directly linked to Dugin and the people who are a national threat to Georgia, it is alarming. Journalists were not punished by the organizers of the punitive operation. Moreover, they operate as a media platform and try even more to divide the society, on ethnic, religious or other grounds. When mainstreaming is done by the government towards these ultra-right extremist groups, it is very dangerous. “In this regard, we have changes in the media space,” – says Tamar Kintsurashvili.

For the sixth year in a row, the Media Development Foundation has been monitoring the peculiarities of its anti-Western propaganda work and sharing its report and findings with the public.