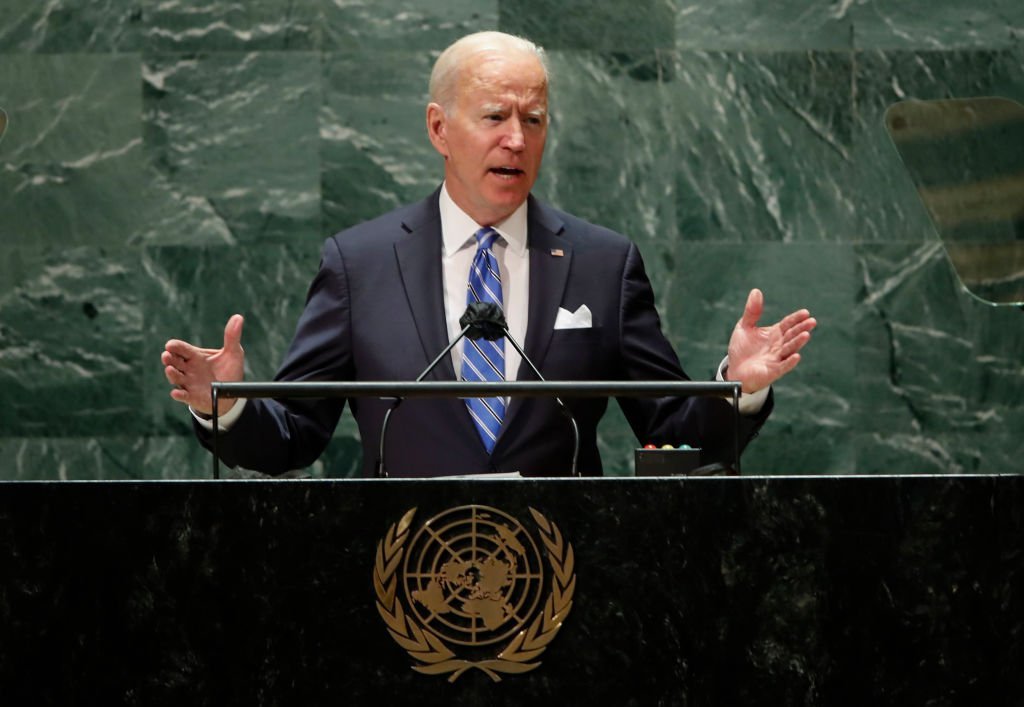 Biden, in a speech at the UN on Tuesday: “military power must be our last resort” (Eduardo Munoz-Pool/Getty Images)

In his first speech at UN General Assembly, the American president, Joe Biden, focused his speech on the search for diplomacy, global partnerships and the “joint” fight against the coming crises.

He also tried to clean up the American image after the criticized departure from Afghanistan, saying that this is a phase of ending eternal wars and seeking solutions through international dialogue. “We’re back at the table,” he said.

“I’m here to tell you what the US intends to do […], and my commitment to lead the world towards a more peaceful and prosperous future for all people,” he said.

Biden said this was the first speech by an American president at the UN in a long time without the country being at war. “Instead of continuing to fight the wars of the past, we are turning our eyes to the collective future.”

“Military power should be our last resort, and it shouldn’t be used for every problem we see around the world”, said that despite this, the US will still use its military power to protect allies and fight terrorism.

Biden said the UN meeting comes in a lot of “great pain” due to the pandemic, but that the future will depend on “the world’s ability to act together”, and that current crises like covid-19 cannot be resolved “with bullets and guns”.

The president said this will be a “decisive decade” and a “tipping point”, citing the fight against the pandemic (and “the next” pandemic, he said), the climate crisis, trade issues and new technologies.

In a long-awaited announcement, Biden also said today that the US will mobilize $100 billion in resources, including with private initiative, to support the fight against climate change in developing countries.

He also stated that all countries need to “bring their most ambitious commitments to the table” at COP 26, a climate conference to be held in November in Glasgow, Scotland. The US has pledged to achieve carbon neutrality by 2050.

But at various points in his speech, he said that the US will defend “democracy” and citizens’ freedom, trying to establish a polarization with the Chinese model. “Government by and for people is still the best way to deliver to our citizens,” he said.

On the international security front, one of the highlights of the speech was the statement that it will support a two-state solution to the conflict between Israel and Palestine.

Biden’s speech, as expected, was largely focused on international organization – and on the search for allies to face the American dispute with China.

On one of the fronts of the speech, he again mentioned the plan Build Back Better World (best build back, one of your campaign slogans, but in the world version). During the meeting of the G7, the seven richest democracies in the world, Biden had stated that the group would make a plan to support infrastructure investments in poorer countries and emerging economies – which could include Brazil.

In today’s speech, Biden didn’t cite further details either, and it remains to be seen how the plan will play out. But the mention of the project shows that this must be, despite recent crises, still one of the American priorities. The main objective is to contain the growing Chinese relationship with emerging countries and present an alternative to the New Silk Road, China’s infrastructure investment plan in allied countries.

Biden said he is committed to NATO, the Western military organization, and has “renewed its engagement” with the European Union. Both fronts, however, gained questions after the departure from Afghanistan, with the analysis that the US will have a less active role in global affairs.

Four years ago, in his first speech at the UN in 2017, former president Donald Trump was criticized for saying that the future did not belong to the “globalists” but “to the patriots”, sniping former American allies and criticizing the then agreement with Iran, from which it withdrew and which Europe and the United States have not been able to reform in the Biden era (Iran, by the way, did not send the president to New York).

“Whether or not we decide to fight for our collective future will reverberate for generations to come,” said Biden, saying the “reality” is that a nation will only succeed if they all are.

Biden’s debut in the Assembly comes with a long list of problems in the country’s foreign affairs. In addition to Afghanistan, the most recent is the crisis between France, the United States and Australia.

Australia canceled a submarine contract with a French company, which would cost more than 60 billion dollars, in exchange for accepting a transfer of technology from the US, angering the French government. Biden and French President Emmanuel Macron are expected to talk over the next few days by phone. Macron will not go to New York, and has sent a recorded speech.

However, the elephant in the room during Biden’s speech is also one of the priorities of the World Health Organization (WHO) during the General Assembly: the still very low supply of vaccines to poor countries.

Globally, only 2% of people in poor countries have received a dose of the vaccine. The global average is 43%. In a statement before the assembly, WHO reinforced that more than 70% of doses in the world were applied in just ten countries.

Speaking at the opening of the event on Monday, 20, the director general of the UN, António Guterres, once again pointed out the inequalities in the pandemic. WHO has reiterated that more than 70% of vaccines so far have been applied in just ten countries.

“First, we have to end this pandemic. Our response has been very slow, and very uneven,” Guterres said. “I call on the world to mobilize to have a global vaccination plan.”

Biden said the US has re-engaged in Covax, the WHO initiative to provide vaccines to poorer countries, that the US has invested $20 billion in the global response to covid-19 and exported 160 million doses. The president also said that this week he will announce “additional commitments” to vaccinate the world.

But the US, as well as other developed countries and where the main vaccine manufacturers are located, is being pressured not only to sell or donate more vaccines to others, but also to expand production capacity.