The number of infections recorded in the last 24 hours, 69,826, was also high, very similar to those of July of this year, a critical time of the pandemic in Brazil

EFE / José JácomeTotal is 184,876 deaths since the start of the pandemic

Brazil again registered more than a thousand deaths by Covid-19 in the last 24 hours. According to data released by the Ministry of Health this Thursday, 17, between yesterday and today were 1,054 deaths, reaching a total of 184,876 deaths since the beginning of the pandemic. The last time that the country had registered more than a thousand daily deaths had been on September 15, when 1,090 deaths were recorded. In addition, 69,826 new cases were registered, increasing the total to 7,110,434. The number of infections recorded in the last 24 hours was also high, very similar to those of July of this year, a critical time of the pandemic in Brazil. However, on Wednesday, 16, the figures for the state of São Paulo, which is the most affected by Covid-19, were not counted in the update. for technical problems. In other words, two balance sheets referring to SP entered today’s accounting. 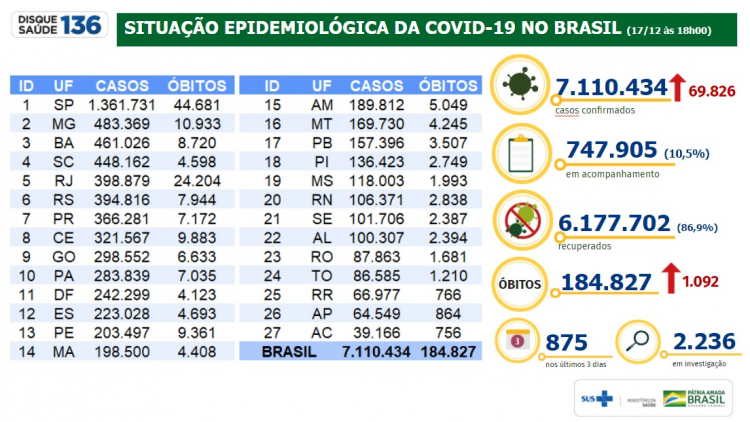 Secret encrypted messages between Basem Awadallah and Bin Salman, which were intercepted by the Jordanian security apparatus and deciphered | A nation is...

LIVE: Senate decides on the installation of the Covid-19 CPI – Prime Time Zone