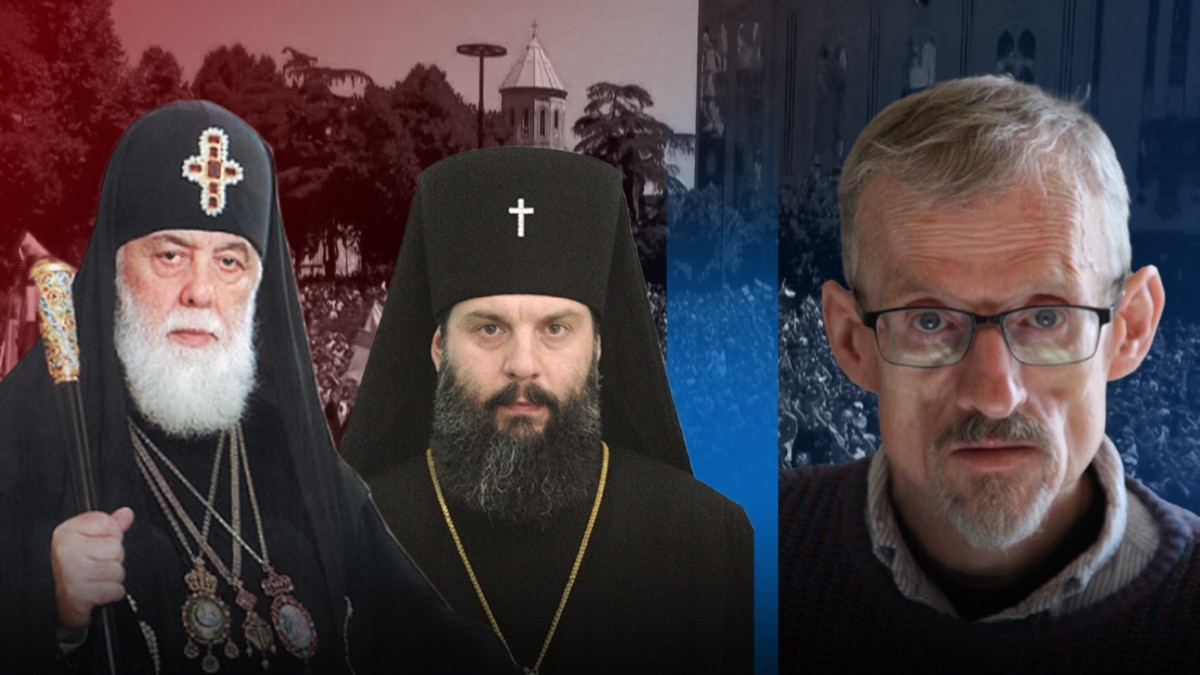 “The nation is being challenged. It is violence, oppression, moral, ideological, on our conscience and spirituality. If this does not happen again, we think it is time for our government and society to start thinking about the concept of insulting religious and national feelings in the legislation. ” This statement was made on July 5, during the sermon at St. George Church in Kashueti, by the co-patriarch, Reverend Shio. When talking about conscience and spirituality, moral and ideological violence, the co-patriarch meant a march of honor. The march planned by Tbilisi Pride did not take place and Reverend Shio already knew about the brutal hate-motivated violence in the streets of Tbilisi during this sermon.

What is meant by the reflection of the “concept of insulting religious and national feelings” mentioned by the co-patriarch in the law, should the church be the guarantor of “national values”? We talked about these issues in Washington, D.C., with Dr. Paul Crago.

Dr. Crego has been researching the Georgian Orthodox Church since the 1970s, speaks fluent Georgian and considers Georgia to be his second homeland. According to Crego, if it so happens that the concepts mentioned by Reverend Shio are really reflected in the Georgian legislation, it will have a devastating effect on the Georgian society.

“If they [საქართველოს მართლმადიდებელი ეკლესიის წარმომადგენლები] They think that they should be the guarantors of national values, which is what co-chair Shio says, what does it mean? This is a long story. Give me a list of your national values ​​and talk about them. Any literature can be considered propaganda.

I think he is [პატრიარქის ტანამოსაყდრე, მეუფე შიო] Will take the Georgian Orthodox Church in an even more conservative direction.

Under this legislation, any literature can be declared illegal and this will not be correct. If they pass this law, it will be devastating. Such legislation is a tool of oppression in Russia, which is used very often by both Putin and the Church. It is the 21st century and we have seen how theocracy works in Iran. Do not go to Iran, or Saudi Arabia, or wherever it is – theocracy. It will be devastating for the community, “said Dr. Crago.

“Georgian Orthodox Church after Independence” is one of the works on the Georgian Church prepared by Crego. Speaking to us, he recalls that he first met Patriarch Ilia II face to face in 1990.

“I have always said that he was probably the ideal patriarch for the transition period, but three decades have passed since then and I know his health is not good now. As far back as 1977, when he was enthroned, he spoke well of peace and ecumenical issues, but when the Soviet occupation ended, he came under great pressure to have a highly conservative view of the church, the nation, the world. At the same time, there was always a feeling that he was nervous about Western values, “said Crago.

Dr. Crago believes that the co-patriarch’s co-conspirators have far more conservative views than the patriarch himself. Ilia II appointed Reverend Shio to the patriarchal throne in 2017. According to the statute of the governing board of the Georgian Orthodox Church, due to the death, resignation of the Catholicos Patriarch or any other reason that will make it impossible for the Patriarch to perform his duties, the Church is governed by a co-regent until the Synod elects a new Patriarch. Some Georgian theologians believe that the establishment of a co-regent by the patriarch in his lifetime may indicate that informally, the real candidate for the future patriarchate is the co-regent. Therefore, we asked the Doctor of Theology what it might mean for the Georgian Orthodox Church and society if the next patriarch is Reverend Shio.

They always talk about national and Christian values. They say they hate sin and not sinner, but then they beat people.

“This will create a paradoxical problem for the church. I think it will lead the Georgian Orthodox Church in an even more conservative direction. He may take many people with him in this direction, but at the same time, a new generation is coming and they will not be isolated. You may do well in Russia, China, but not in Georgia. “Georgian youth are well connected to the rest of the world through the Internet, and that’s important,” Crego said.

What are the similarities and similarities between the Georgian and Russian Orthodox Churches and whether he sees Russian influence in the Georgian Patriarchate? Dr. Crego says that Reverend Shio’s statement fits perfectly with Vladimir Putin’s approaches.

“He [ილია მეორე] Educated in Russia and of course has a lot of connections. I think there is closeness and friendship between the Russian and Georgian churches and I think the patriarch has always tried to be a person who can negotiate. It is difficult to determine the influences if there were already some problematic approaches to some issues in the Georgian Church. For example, I do not think that homophobia was created by the Russians in the Georgian Orthodox Church. But the whole idea of ​​Co-Shio’s legislative proposal to insult religious and national feelings fits perfectly with the approaches of Putin and the Russian government. It really is a matter of freedom of speech and expression. “This should not be good for the Georgian Dream, the Georgian government,” the researcher said, adding that the government was unlikely to pass such a law.

At the same time, he explains that the “Great Symphony” between the state and the church does not help the church, because such a position deprives the church of the opportunity to be critical of the government. “I think this is the situation now, which means they want to have more power,” Crago said, citing Putin’s Russian Orthodox Church as an example. “In Russia, the prestige of the Orthodox Church is somewhat miraculous, because it’s Putin’s church, when without Putin the church can do nothing. But before the church plays Putin’s game, they feel good. “If they start preaching against Putin, they will have problems.”

The Georgian Orthodox Church denies any allegations of incitement to violence against him, despite public outcry over calls made by certain clerics on Rustaveli Gazmi on July 5.

“I do not want to judge the whole church, but it is very unfortunate that part of the Georgian Orthodox Church makes very unpleasant statements. Hate is not a Christian value. They always talk about national and Christian values. They say they hate sin and not sinner, but then they beat people. “It does not correspond to their messages,” said Crago.

It is sad to see how this beauty is mixed with hatred and intolerance. The Orthodox Church can be better.

The doctor of theology says that violence on homophobic grounds is not new for the Georgian Church, and recalls the example of May 17, 2013, when “hundreds, thousands came out against the minority members of the LGBTQ community.” In addition to theological aspects, That the government is obliged to protect its people, in return for which “Prime Minister Gharibashvili accuses members of the LGBTQ community of provocation.”

“The State Department has already made a statement and this time they will be tougher. Should be tougher. We are talking about the European Union, NATO, we understand their roots in terms of democracy, tolerance, human rights and civil liberties. But, for example, Turkey, as if we always gave the right to be on the other side of all this, and now as a result we have Poland, Hungary. I think someone will raise their voice and say – Georgia, if you can not defend your own people in the center of the capital, in front of the parliament building, defend human rights, then we should talk about it. At the same time, on the one hand, the human rights legislation in Georgia is good, but it is about its enforcement.

Whenever I hear the word national values, I want to run in another direction because it is a false, illusory, illusory idea. Especially if you try to relate it to Christian values ​​because the church is not a nation and a nation is not a church. “I know they like to think like that and there are many countries where they think like that, but I think this approach does not work, it does not bring good results,” said Crego.

Dr. Crego has been a researcher at the Library of Congress for many years. Speaking to us, a few years ago, he recalled the visit of high-ranking hierarchs of the Georgian Orthodox Church in Washington.

“Several years ago, we hosted the high hierarchs of the Georgian Church in the Library of Congress. I asked them to sing and it was an unearthly listener. It is sad to see how this beauty is mixed with hatred and intolerance. The Orthodox Church can be better. That is my opinion. No matter what you do, no matter what you think, do not take to the streets to beat people. If your followers beat people in the street, something is not done right, it is not Christianity. It does not matter what your beliefs are about Christian or national values. Christianity is not about beating people. If this is going to be a central part of your business, if Co-Shio supports freedom-restrictive legislation, it’s their [ეკლესიას] It will create problems and young people will turn their backs on it. If you are going to uphold conservative values, make sure you really remember – the main Christian value is love. “

“We are sorry that there were mistakes, unfortunate incidents, incorrect actions, several people were injured,” the co-patriarch’s co-chair said from the pulpit on July 5. Today we can say for sure that several dozen people were injured in the streets of Tbilisi as a result of the hate-mobilized mass violence against the march organized by the Tbilisi Pride. There are more than 50 journalists among them and some of them are still in critical condition.

Alexander Lashkarava, a cameraman for TV Pirveli, who, according to eyewitnesses, was severely beaten by more than 20 members of violent groups on July 5, was found dead by family members at dawn on July 11. Irakli Kobakhidze, the chairman of the Georgian Dream, based on the evidence released by the Ministry of Internal Affairs and the interim data of the expertise, claims that the death of Lexo has nothing to do with the events of July 5.