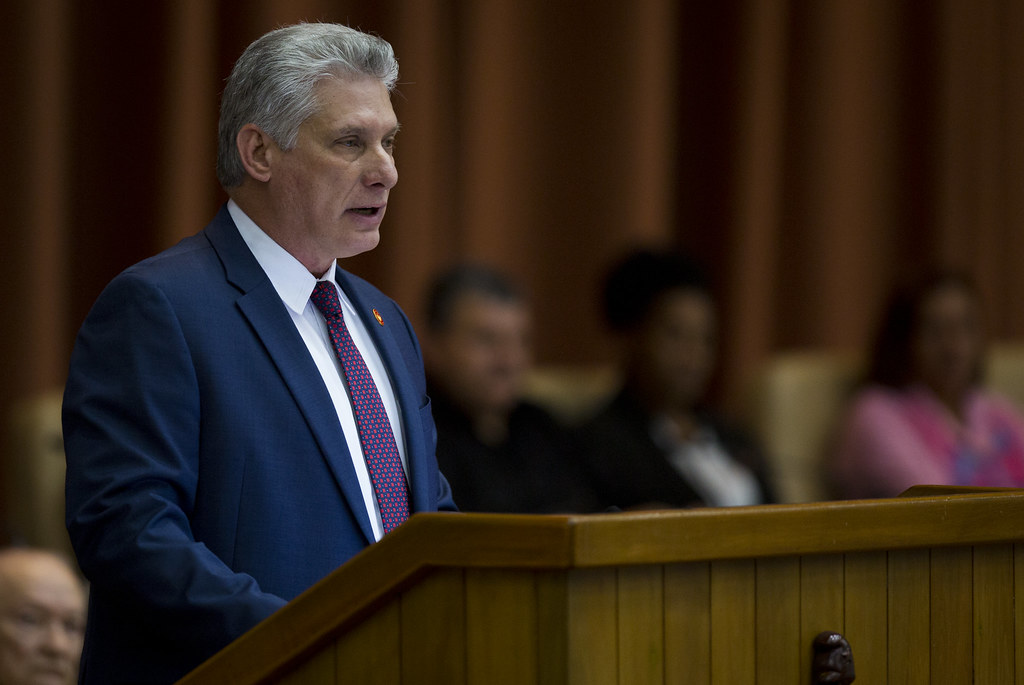 Not Sunday, or President of Cuba, Miguel Diaz-Canel, said: “The order of combat is given, the revolutionaries to the streets. They will have to go over our dead bodies, we are willing to do anything.”

After the biggest anti-government protests in decades, the President changed his tune, denying having encouraged the Cubans demonstrating and accusing the United States of trying to destabilize the country by forcing regime change.

“I only appealed to the Cubans to defend their revolution, and the people, who went to debate and argue, had to defend themselves against the violence of the protesters,” he said, quoted by Público.

At Monday’s press conference, Díaz-Canel said that Sunday’s protests were aimed at “fracturing the unity of the people” and “discrediting the Government and the revolution”, pointing a finger at USA for continuing a strategy of “economic asphyxia to provoke social unrest” and achieve “regime change” in Cuba.

“Who bothers Cuba’s political system? To the United States, which does not see the virtues of Cuba, of a system that works for everyone and has results in people’s health, education and safety”, he explained.

Sunday’s protests were the biggest on record on the island since the so-called “Maleconazo”, when in August 1994, during the “special period”, hundreds of people took to the streets of Havana and did not leave until the arrival of the then Cuban leader Fidel Castro.

This Monday, the heads of diplomacy of the European Union (EU) shared the concern with the repression of the demonstrations.

The Portuguese Minister of Foreign Affairs, Augusto Santos Silva, indicated that the EU High Representative for Foreign Policy, Josep Borrell, made a presentation of the situation in Cuba, having the 27 shared “their concern” with the fact that the demonstrations are being repressed by the Cuban authorities.

“The right to demonstrate, the holding of peaceful demonstrations is a fundamental criterion for the EU in assessing the quality of political regimes, whatever they may be. And, in fact, it is a very simple criterion to distinguish political regimes and societies that are free from those that are not”, said Santos Silva.

“We are watching what appears to us to be a very worrying evolution of the Cuban regime’s relationship with the right to demonstrate. Let’s see how things evolve, and what we can influence so that they evolve in a positive direction”, he added.

Joe Biden, President of the United States, said that the country supports the people of Cuba in their call for freedom. “We stand beside the Cuban people and support their call for freedom and relief from the tragic grip of the pandemic and the decades of repression and economic suffering they have been subjected to by Cuba’s authoritarian regime,” he said.

After violent clashes in Santiago, Matanzas and Cárdenas, protesters are considering moving to Miramar in the coming days. It is in this area, in Havana, that high-ranking government officials, including the Castro family, live.

According to the The Spanish, the five children Fidel had with Dalia Soto, his second wife, live in the prime area of ​​Havana, in an area called Punto Cero. However, according to the same Spanish daily, the Castros are already preparing your exit from the island to Spain.

Idalmis Menendez, who was married for six years to Alex Castro, Fidel’s son, revealed to the morning that her ex-husband has already left Cuba.

“I think Alex is already gone” because, “among other things, they didn’t publish anything on their social networks for about a month,” he said. “I know you do it when you’re traveling. When you go to the Dominican Republic on business. Or when you come to Spain.”

Menendez thinks fate will be Spain due to the connections they have in the country: in addition to the various businesses they maintain in the country, most of Fidel’s children have a Spanish passport.

“They have connections here in Spain, especially business. They close deals here with people with a lot of money. With entrepreneurs from Barcelona, ​​Matadepera, Girona. But it’s not just in Catalonia, we know that they also do business with people from Galicia. These are private businesses, which at no time do for the good of the Cuban people,” he said.

Idalmis Menéndez, who went from a family member to an anti-regime activist, also revealed that the Díaz-Canel government is responding to the protests with repression.

“They brought up the GRR (‘Rapid Response Groups’),” he said, explaining that the modus operandi passes through undercover agent infiltration among the protesters. “Reports reach us of true atrocities they are allegedly committing.”