Despite billions of reserved doses, Europe fails to vaccinate and intensifies crisis

Emma Corrin thanks Princess Diana for the Golden Globe: ‘She taught me compassion’

Emma Corrin, from The Crown series, won the award for best actress in a drama series because of her...
Read more

Richagangopadhyay made her Telugu screen debut with the 2010 film Leader. ...
Read more

Richagangopadhyay made her Telugu screen debut with the 2010 film Leader. ...
Read more

The new year should bring better economic fortune to the whole of Europe, as coronavirus vaccines were being applied.

Instead, the eurozone economy shrank by the end of 2020, according to official data this month, raising fears of a renewed recession and demonstrating that the pandemic is likely to remain a force for at least a few more months, thanks to European Union’s problems in distributing vaccines.

Economic output in the 19 eurozone countries fell 0.7% in the fourth quarter from the previous quarter, according to a preliminary estimate by the official European Union statistics agency. In the whole year, global production fell 5.1%.

Europe is likely to experience continued economic contraction in the first three months of 2021 and perhaps early in the next quarter, as governments are forced to maintain restrictions on trade, according to a report released on February 2 by Oxford Economics in London. “There is definitely a risk that the distribution of vaccines will continue to disappoint. There is a risk that the second quarter will also be very bad, ”said Tomas Dvorak, a eurozone economist at Oxford Economics.

The failure of European governments to obtain vaccines for their citizens could create a political reaction, fueling resentment against Brussels and souring the already troubled relations between the 27 countries that make up the EU. Competition for vaccines has already soured the bloc’s relations with the United Kingdom.

“We have to look at the possible political consequences,” said Holger Schmieding, chief economist at Berenberg Bank in London, in a statement. 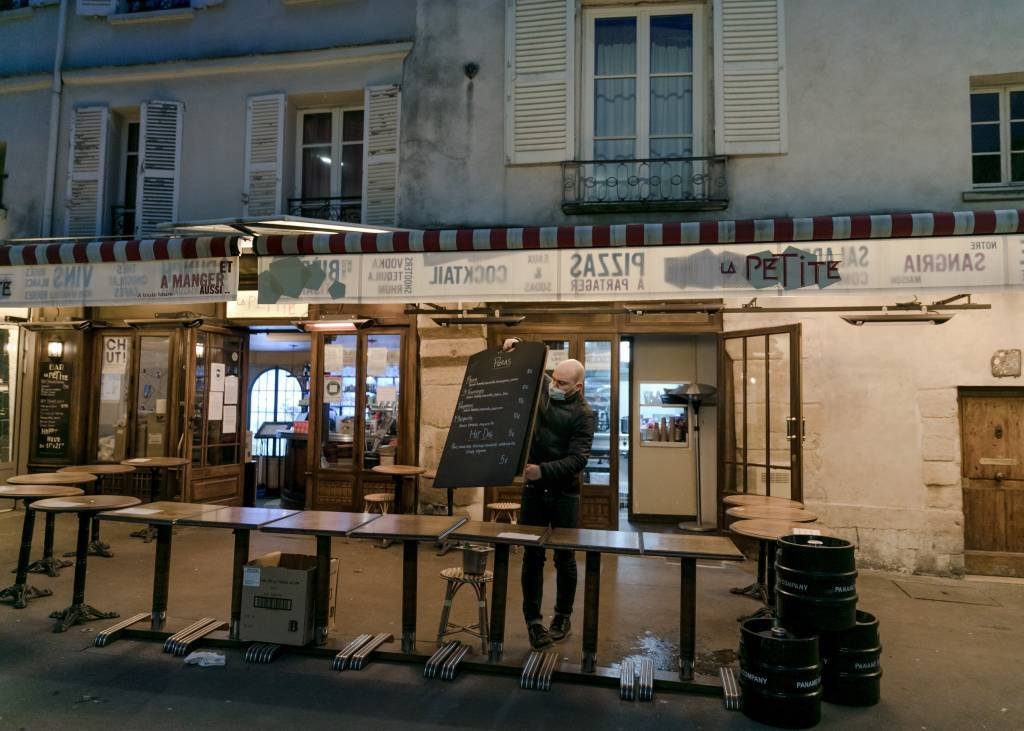 Previously, Oxford and other economists had predicted stagnation for the first quarter of the year, followed by a marked improvement in the second. This view was guided by the assumption that vaccines would be widely distributed, allowing authorities to lift restrictions imposed to control the spread of the coronavirus. As people returned to stores, restaurants and vacation destinations, and as factories resumed production, savings would expand again.

This result now seems to be guaranteed to be delayed, as Europe faces difficulties in obtaining and distributing vaccines. The euro zone faces its second recession in six months, after its economy shrank in the first half of 2020.

European factories have largely adapted to the pandemic and are operating almost normally, but people whose jobs depend on face-to-face contact are suffering. More than half of Germans working in hotels or restaurants, about 600,000 people, are on government-subsidized leave and are effectively unemployed, according to the Ifo Institute in Munich, a research organization.

Germany achieved only small growth in the fourth quarter of 2020, and the economy of Italy and France decreased. The three remain in confinement.

In the 27 states of the European Union, only 2.5%, on average, of the population received at least one dose of vaccine, while Germany, Italy and France are all below that bleak mark.

In contrast, the United Kingdom – which aggressively bought vaccines and which depends on its national health system to distribute them – guaranteed at least one dose to more than 13% of the population.

Economists assume that the EU will succeed in substantially increasing vaccination soon, allowing restrictions to be gradually lifted. But the potential for more disappointment remains.

“The harsh quarantines against the virus have once again made the eurozone economy go into recession,” said Christoph Weil, economist at Commerzbank, in a note to customers. He predicted that the drop in the current quarter would be even more pronounced.

Europeans expected stability after a year on a roller coaster. In the second quarter of 2020, the Gross Domestic Product fell 11.7% with the pandemic. Then, growth recovered 12.4% in the following quarter, the highest ever recorded, as blockages were easing and companies were adjusting to the crisis.

Economists do not expect such severe variations in 2021, but few believe that the euro zone will regain its economic strength before 2022.

Often defamed for their thoughtful and bureaucratic attitudes to crises, the European Union has fallen out with pharmaceutical companies over contract terms, allowing more aggressive governments in London, Washington and elsewhere to secure supplies. Many Member States have therefore chosen not to buy all their supplies from the European bloc. 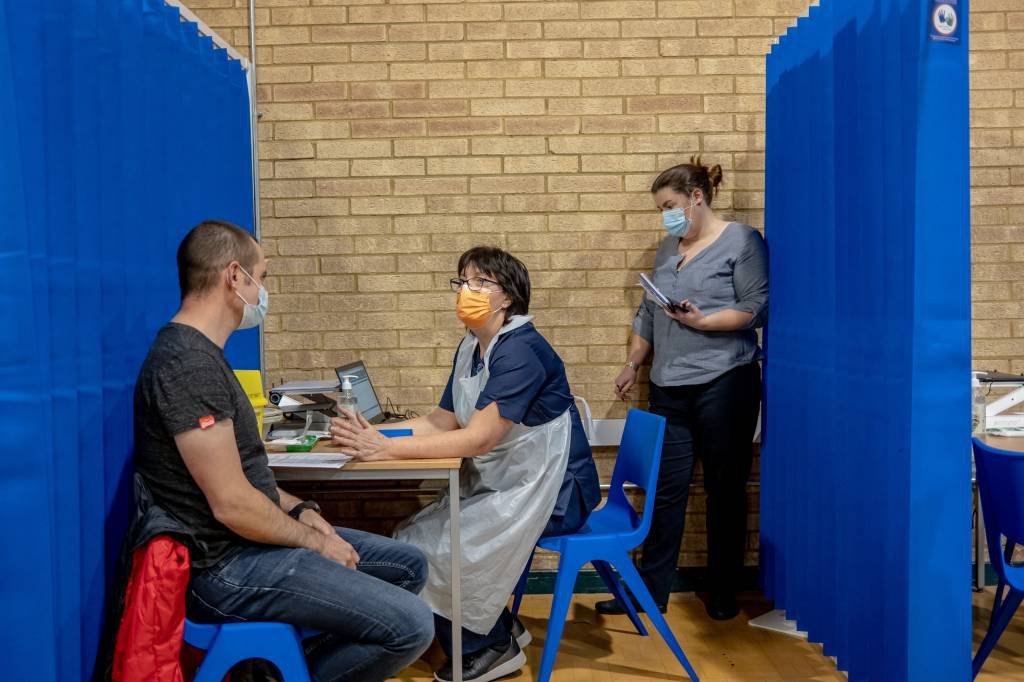 British before getting vaccinated in Wales: vaccination has been faster in the UK (Andrew Testa / The New York Times)

If scarcity and distribution bottlenecks persist, the economic recovery may be further hampered, as governments will be able to maintain restrictions for longer.

In addition to the moment of eventual return to economic growth, the deficient European vaccination campaign also threatens the magnitude of the recovery.

As hopes that vaccines will prove transformative give way to a more complex understanding of the continuing risks of the pandemic, people may be more cautious even after governments allow them to return to stores, offices and entertainment venues. Companies that have figured out how to replace business travel with Zoom meetings can avoid putting their employees back on planes. If risk aversion persists, it can limit economic growth, even after the pandemic is controlled.

However, in the end, vaccines will reach the entire European population and the infection rate will drop, allowing a return to places now avoided as vectors of the virus.

“I am careful to say that we will return to normal, because it is very difficult to determine what is normal. But I think it is reasonable to assume that consumers will resume their consumption patterns, ”said Dvorak.

Share
Facebook
Twitter
Pinterest
WhatsApp
Telegram
Previous articleEmergency aid: when you return and what are the consequences of the resumption of the benefit – Prime Time Zone
Next articleAfter USA, United Kingdom shows concern with WHO mission that sought the origin of Covid-19 – Young Pan

Emma Corrin thanks Princess Diana for the Golden Globe: ‘She taught me compassion’

Emma Corrin, from The Crown series, won the award for best actress in a drama series because of her...
Read more
Trending

‘They are trembling at the sight of Chandrababu’

In the last 24 hours, 34,027 new cases and 721 orbits were registered due to the disease across the country EFE / Antonio Lacerda Since the...
Read more

Only essential activities will be able to operate until 5 am on Wednesday, 3; curfew was maintained throughout the state until Sunday, 7 EDUARDO...
Read more

When a tiger is worth more dead than alive: The sordid reality of breeding farms – ZAP

In some Asian countries, breeding farms for tigers...
Read more

Ana Estrada. In a historic decision, Peru opens the door to euthanasia

https://www.youtube.com/watch?v=iDAYJghz_bA In a historic decision this Thursday, the 11th...
Read more