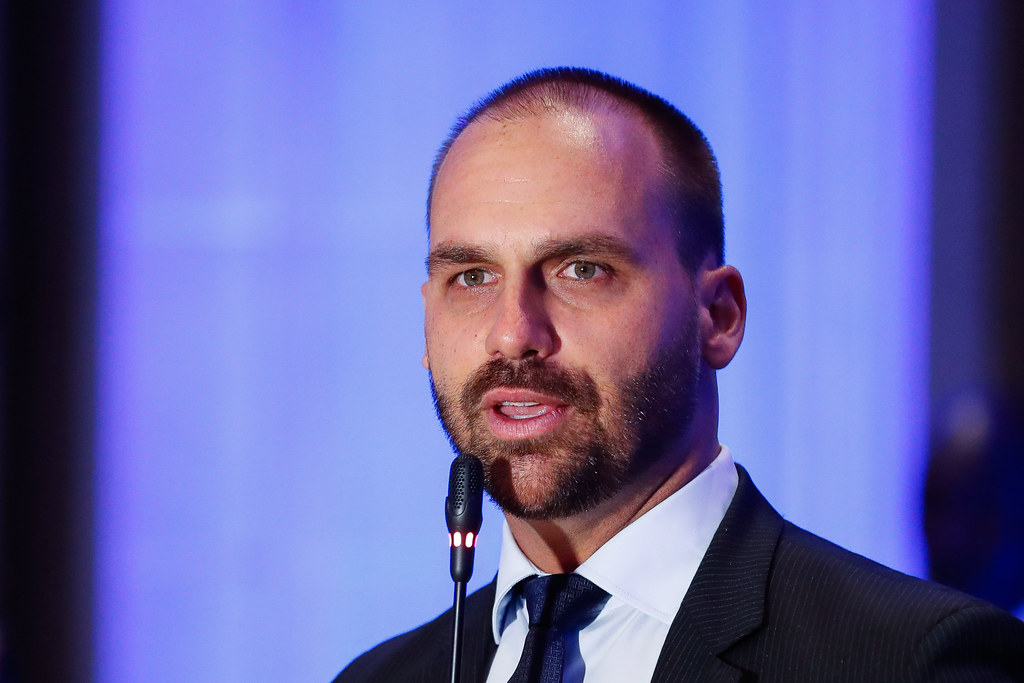 The son of the President of Brazil, who is also a federal deputy, is the third member of the Brazilian delegation that traveled to the US to test positive for covid-19.

the Brazilian federal deputy Eduardo Bolsonaro, son of the President, Jair Bolsonaro, and two ministers of state were diagnosed this Friday as covid-19 positive.

Eduardo Bolsonaro was the third member of the Brazilian delegation that traveled to New York to participate in the 76th General Assembly of the United Nations (UN), which tested positive, in addition to the minister of Health, Marcelo Queiroga, and a diplomat.

The Minister of Agriculture, Teresa Cristina, and the Attorney General of the Union (AGU), Bruno Bianco, who announced this Friday that they were infected by SARS-CoV-2, did not travel with the Brazilian delegation.

Despite the diagnosis, I am feeling well and I started treating myself immediately 😉

Thanks for the hundreds of get-well wishes I’ve received. I’ll be back soon.

on your account at Twitter, Eduardo Bolsonaro, who had already received the first dose of the vaccine against the new coronavirus, stated that it is okay that he has already started treatment, although he did not specify which one.

“Despite the diagnosis, I feel fine. and I started treating myself immediately”, he wrote.

The son of the Brazilian head of state had received the first dose of Pfizer’s vaccine against covid-19, but this Friday he returned to question its effectiveness and also criticized the so-called health passport adopted in several countries, including Portugal.

“We know that vaccines were made faster than standard. I took the 1st dose of Pfizer and contracted Covid. Does this mean the vaccine is useless? I do not believe. But it’s more of an argument count the health passport. Studies on side effects and efficacy are taking place now”, he stated in another message on the same social network.

The Brazilian delegation returned to the country last Wednesday after a speech made by Bolsonaro at the UN, in which the government official defended the use of ineffective medicines against covid-19 and opposed the health passport.

However, the Brazilian delegation returned without Health Minister Marcelo Queiroga, who stayed in New York after testing positive when the delegation was preparing to return to Brazil.

In the United States, Queiroga participated in various official activities: a meeting between Bolsonaro and the British Prime Minister, Boris Johnson, and meetings with other personalities, such as the UN Secretary General, António Guterres, and former Chilean President Michelle Bachelet , current UN High Commissioner for Human Rights.

In addition, the minister of Health visited the UN complex and the streets of New York, where he was seen with Bolsonaro and part of the Brazilian delegation eating pizza on a sidewalk, as the President could not enter restaurants because he is not vaccinated against xovid-19.

The Minister of Agriculture, Teresa Cristina, also used Twitter to inform about her diagnosis and say that she is doing well.

“Good Morning! I let everyone know that I tested positive. to #Covid19. I am well. I canceled my in-person appointments and I will remain in isolation during the period of medical orientation”, he wrote on the social network.

Good Morning! I let everyone know that I tested positive for #Covid19. I am well. I canceled my in-person appointments and will remain in isolation during the period of medical counseling.

The AGU infection, Bruno Bianco, whose post also has minister status in Brazil, was confirmed by the press office.

Brazil is the Portuguese-speaking country most affected by the pandemic and one of the most affected in the world, accounting for more than 595,694 deaths and more than 2.3 million confirmed cases of Covid-19.