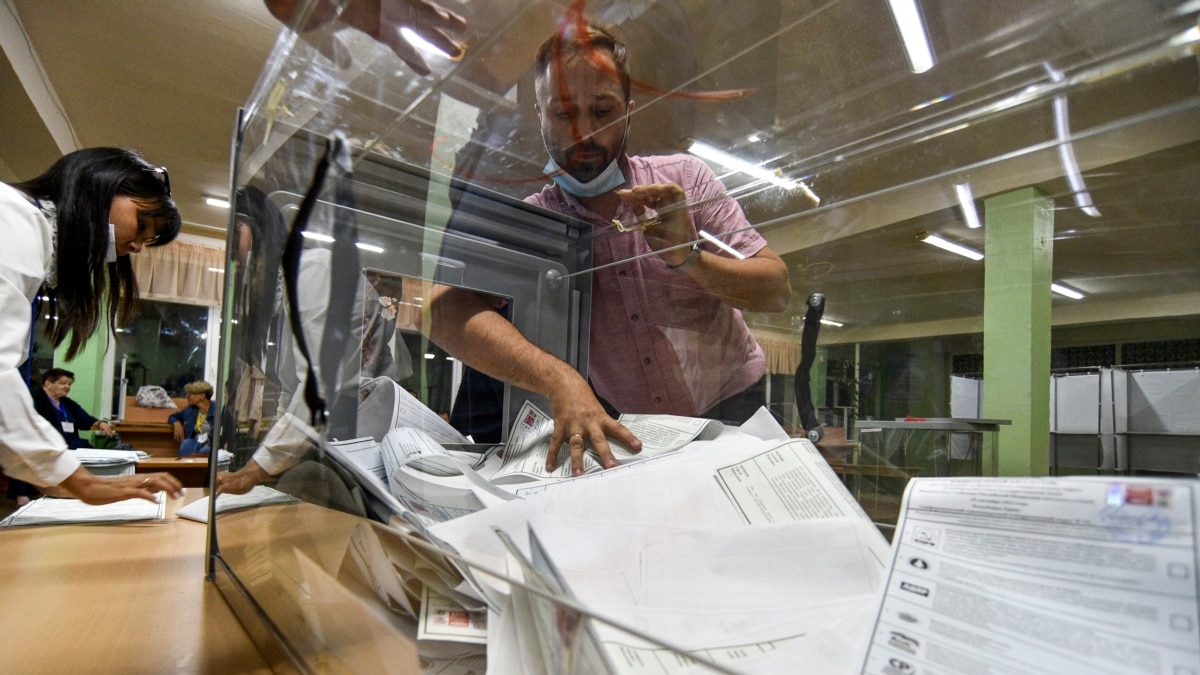 In the parliamentary and regional elections in Russia, in which participation of almost the entire opposition spectrum was banned, the ruling party won. According to official preliminary results, the United Russia party won almost 50% of the vote, slightly less than its current position, and retained its constitutional majority. Even the party was the least popular now in two decades, according to state polls, and its activities were liked by less than 30% of the population. According to the election commission, the Communist Party is in second place with 19% of the vote. Analysts call the election process a “political theater” and an “unsuccessful ritual of legitimacy.”

Voting in Russia’s parliamentary, regional and local elections lasted for three days amid growing repression. This was explained in order to prevent the spread of Kovid-19, although critics spoke of large-scale fraud and the violent nature of the pre-election environment. For the first time in almost 30 years, OSCE observers were not allowed to observe the elections under the pretext of covetousness. Activists say the election was already illegitimate and rigged by polling day because the real, not façade, opposition was not allowed to run in the election. Independent media outlets or non-governmental organizations were operating under extreme pressure or were unable to carry out their mission at all due to this or that repressive law. Shortly before the election, the list of “foreign agents”, “extremists” or “undesirable organizations” increased significantly.

“It is even debatable whether we can talk about the opposition in Russia at all. The term “opposition” is associated with democracy. Members of the opposition usually sit in parliament or on TV shows to run in elections. “The main opponents of this regime are either no longer alive, or in prison, or have fled the country,” said Vladimir Kara-Murza, an activist and chairman of the Boris Nemtsov Foundation.

As for the parties that, in addition to “United Russia”, participated in the elections and will be a minority in the legislature, according to opponents, they are façade, part of the system and only serve to maintain the democratic image of the country. However, according to Western analysts, there is nothing democratic about this election.

“This election is a farce, I will say it directly. “Nothing about this election is democratic,” said Stephen Blank, a senior fellow at the Institute for Foreign Policy Studies. “Candidates are predetermined, we know from past experience that leaders in the regions also receive orders from Moscow to provide 60-70% support for Putin and” United Russia “in their regions. Opponents of the regime are being harassed more and more severely. We see total harassment from all sides, including the media. There is an information “blockout” in the country. Attempts to provide financial or other assistance to opposition candidates will also be blocked in the run-up to the elections. We know that virtually every election since 1996 has been rigged. “In Putin’s hands, nothing can make this election democratic,” Blank said.

Atlantic Council researcher and University of Texas professor Brian Whitmore says this year’s election in Russia is still a process where we know that “the Kremlin can rig the election and show us that yes, they can change the outcome of the election once again.” Whitmore has been the author and presenter of the Power Vertical blog and podcast over the years, as well as Radio Liberty’s leading analyst on Russia.

“The reports of falsification were large-scale and well-substantiated. We even expected this. “But when we look at the Russian election, we have to approach it as a ‘political theater,’ and I don’t think this play went well enough,” Whitmore said, referring to low voter turnout and low voter turnout. He could not even mobilize more. He said the Kremlin had not gained enough legitimacy to achieve this election.

Analysts say that despite the widespread use of traditional methods of fraud, the Kremlin also needed to manipulate the newly introduced electronic system this year. The use of the latter as a tool for falsification, according to experts, physically confirms the radical difference between “hand-counted ballots” and electronic counting results.

“I attended the vote counting process in one of the central districts of Moscow. We have had real results there over the years. “In 2013, Alexei Navalny won the Moscow mayoral election in this district,” said Vladimir Kara-Murza. “27% of the votes in this constituency were received by the Communist Party, obviously a big contribution to this is made by the” smart voting “application. “United Russia won 20 percent of the vote, and Yabloko, the only real opposition party allowed to run in the election, won 19 percent.”

The “Smart Voting” app is a system initiated by imprisoned opposition leader Alexei Navalny to identify candidates who do not represent the United Russia party and have a chance of winning. Citizens are sometimes advised to support them. Even if they were not completely independent candidates from the Kremlin.

We know that Russia interfered in the US elections in 2016. Putin is trying to so-called To create “false equivalence”, to put signs of false equality. It is also a strategy of disturbing the water: to make it difficult for the Russian population and those outside the country to distinguish between truth and falsehood.

However, while, as a rule, the results of electronic voting can be published very soon after the closing of the polls, even after almost 24 hours, the citizens did not know its results. The announcement of the results was particularly protracted in Moscow and St. Petersburg. According to activists, this indicates that the Russian authorities were trying to manipulate the results and copy the protocols.

Vladimir Kara-Murza says that if before the physical effort – stuffing ballots, the so-called. Carousels, etc., were enough, now with all this, the electronic system, which is now only used in less than 10 regions, and in the next elections across the country, has given rise to fraud on an unprecedented scale:

“This time, millions of fictitious voices will be counted electronically, which no one will be able to verify. No one really knows how this system works, we do not know how sounds are counted, there is no way to control or monitor it. They can write any result they want … If we compare the results of physical counting of votes with electronic results, these will be two different countries that have nothing to do with each other. “The results of the electronic system have nothing to do with the real mood of Russian citizens,” said Kara-Murza.

Snegovia explains that the Kremlin has recently not only harassed activists and journalists, but also intensified the repression of other groups, including universities, youth unions, and, most dangerously, the Internet. “The future is against the Kremlin,” said the researcher, adding that the Internet is even present in the Kremlin’s updated doctrine of national security as a threat to the country.

That is why, according to the researcher, especially dangerous may be similar to the decisions made by Western companies on election day. In parallel with the opening of polling stations, the “smart voting” application disappeared from the search engine of “Apple” and “Google”.

Russia accuses the West, particularly the American techno-giants, of trying to interfere in the elections. The country’s foreign ministry also summoned the US ambassador in connection with the case.

Lincoln Mitchell, a professor at Columbia University, says this is another attempt at “false equivalence” and equals.

“We have never seen anything like this from Putin. We know that Russia interfered in the US elections in 2016. We can argue on various aspects, but there is no doubt about it. Even with such an action [ახლა] Putin is trying to so-called To create “false equivalence”, to put signs of false equality, “You blame us, and we blame you. On the other hand, it is also a strategy of disturbing the water, making it difficult for the Russian population and those outside the country to distinguish between truth and falsehood. “We saw the same thing in Ukraine in 2014 and before,” Mitchell said.

Analysts also explain that obedience to the demands of authoritarian regimes may even be discussed in the US legislature.

“The fact that Apple and Google have expressed their readiness to submit to censorship has given the Kremlin the green light. We will see many such practices in everyday life as well. Obedience to dictatorial standards by big tech companies is a big problem, I think it needs to be addressed and I hope a solution will be found. Because otherwise, we see the end of the internet as it is. The information monopoly is crucial for the Kremlin, and it has repeatedly helped control it in the past. “I think this issue can really be on the agenda of the Congress and it will be possible to put the dictators of technology companies in the regulations,” Snegovia said.

Elections in Russia have already been condemned in Western countries. An EU spokesman said the election had not been properly monitored and that it was neither free nor fair. Similar statements have been made in the UK, Germany and the United States.

The State Department said in a statement that “the Duma elections were held in conditions that did not promote a free and fair process.” “Political pluralism has been severely curtailed and the Russian people have been prevented from exercising their civil and political rights.”

In Putin’s hands, nothing can make this election democratic,

In addition to the widespread falsifications spoken of by the opposition and Western organizations, the West unconditionally considers the election results from the Russian-occupied regions to be illegitimate. The US State Department has said it does not recognize the Russian Duma elections in Ukraine’s sovereign territories and reiterates its support for Ukraine’s territorial integrity.

It is true that almost no one expected a change in the political landscape in Russia after this election, but Brian Whitmore says it is the last federal election until 2024, and for Vladimir Putin, whose presidency expires again this year, this composition of the legislature will be important. Vladimir Kara-Murza reminds the Kremlin of the lessons of history and says that the law shows: “In countries where there is no change of government in the polling stations, sooner or later, it changes from the streets.”