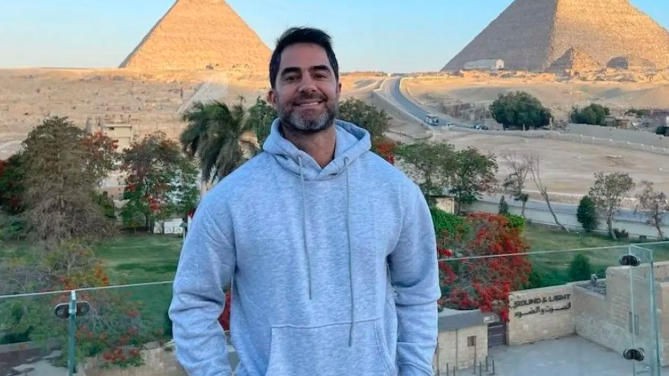 In the letter, written in English and Arabic, physician Victor Sorrentino’s closest relatives express their ‘sincere feelings and commitment to repairing all material and moral damages’

Image: Reproduction/Instagram @drvictorsorrentinoThe Brazilian has been imprisoned in a public building in Egypt since the 30th

the doctor’s family Victor Sorrentino released this Thursday morning, 3, a letter in English and Arabic in which he apologizes for the incident that led the Brazilian to be arrested and investigated for sexual harassment in the Egypt. Porto Alegre was arrested on the 30th because of a video that went viral on the internet in which he asks an Egyptian woman questions with sexual connotations. Muslim. “On behalf of Victor, we offer an official apology to the victim, his family and everyone who brought up the matter. To all the dear Egyptian people and all officials of the State of Egypt, our most sincere sentiments and commitment to repairing all material and moral damages. We ask to receive our apologies”, says the text. The document was signed by the parents Migel and Maria Cristina, by the wife Kamila and by the brothers Guilherme, Patricia and Daniela. On Tuesday, Egypt’s Public Ministry announced that Victor Sorrentino would remain in detention for at least four more days while investigations continued. In a statement published on Twitter, the organization explains that he is being accused of having attacked “the precepts and values ​​of the Egyptian family and society, violating the seller’s privacy and using an electronic account to commit these crimes.”

In the recording that caused his arrest, the Brazilian appears in a mocking tone, questioning a saleswoman who does not understand his language: “You really like the hard stuff, right? And long is also nice, right?”. After the negative repercussion of the video, he deleted the post from social networks and posted another recording apologizing to the employee. “It was a joke, a joke in bad taste, that I usually play with my friends and family in Brazil. However, people think I was bad, mean, inelegant and perverted to you. I didn’t understand this at first because I’m used to playing like that. I know I have no right to play with people I don’t know”, said the midfielder. In this new video, he even explains to the salesperson that his “tasteless joke” alluded to a penis. “I am like that, a very playful guy. I want to apologize and know if you were offended. As you were very laughing, I ended up playing with you, but I didn’t want to offend you”, he continued. In turn, the seller replied that “she is not sad” and that “everything is fine”.