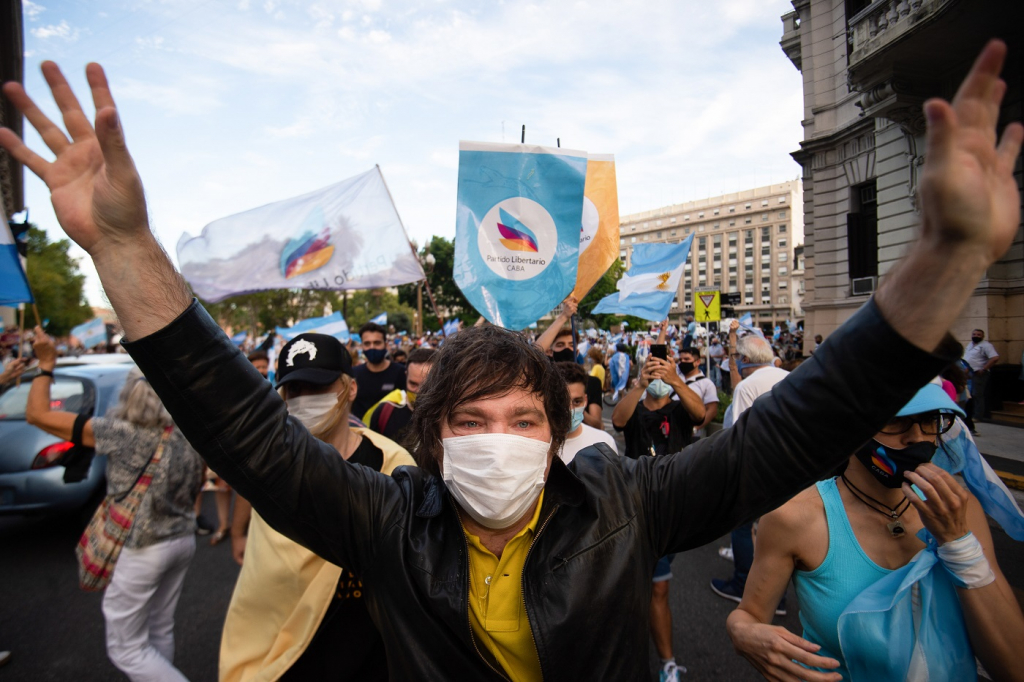 Economist Javier Milei is running for councilor and was the third most voted candidate in Buenos Aires, stronghold of vice president Cristina Kirchner

The naturally messy hair added to formal clothes and catchphrases reproduced on social networks are some of the characteristics that give a populist air and make the figure of the economist Javier Milei striking in Argentina. At 50 years of age and without any tradition in the country’s politics, he, who had already been gaining social media for polemics and radical opinions against traditional candidates, emerged in the primary elections, winning third place in the polls for deputy in Buenos Aires, stronghold of the current Vice President Cristina Kirchner, with more than 13% of the votes, appears as a “third option” for those who want to escape the usual bipartisanship. On Instagram, with almost 900,000 followers, Milei reproduces complaints and criticisms of competitors, promotes her economics course and reproduces the catchphrase “Long live freedom, man***”. Conquering not only a crowd of older conservatives but also young people who have just won the right to vote in the country, lighting the alert for the arrival of the ultra-right wave in yet another country in Latin America.

Even though Javier Milei does not consider himself to be an ultra-right, claiming to be just a liberal, the experts heard by Young pan point out that the candidate presents classic positions of extreme conservatism. According to Paulo Velasco, adjunct professor of International Policy at the State University of Rio de Janeiro, at least three characteristics of the far right can be noted in the economist: the anti-political stance, with a rhetoric that classifies most candidates as corrupt and free-riders in pursuit of their own interests; the conservative agenda linked to morals and good customs, against progressive agendas such as abortion; the defense of a macroeconomic adjustment with a reform that is still poorly explained to the population. “He talks about reform, but no one really knows what magic he would work out in terms of reform. He says he won’t put [as mudanças] in society’s account, which is unrealistic, because the rope always ends up breaking on the citizen’s side”, assesses the professor.

Professor Regiane Nitsch Bressan, from the São Paulo School of Politics, Economy and Business at the Federal University of São Paulo (Unifesp), also cites as characteristic signs of Milei’s rhetoric in defense of freedom and the right to private property, speeches that are points in common between the candidate and other politicians framed in the area of ​​the extreme right, such as Jair Bolsonaro e Donald Trump. The desire to dissolve the Central Bank, to reduce the number of parliamentarians in the country and to reduce the salary of bureaucrats and people of the political class are also other hallmarks of the candidate, as well as the desire to cut ties with countries considered by many to be dictatorships. from the left in Latin America. “He wants to completely break support for certain countries in the region, such as Cuba, Nicaragua and Venezuela, above all Venezuela, with whom Argentina has maintained support while Colombia, Chile and Brazil have already drifted a long way,” he says. The UERJ professor recalls, however, that Milei’s characteristics are not common to Argentine democracy, but, on the other hand, they are not new in the world. “It reflects a lot of what we’ve seen in Europe, the United States and Brazil as being more to the right. It is not the traditional Argentine right, like the Radical Civic Union or even as part of Peronism. It also does not reflect the Macrismo right, or the 1990s right, under President Menem. It’s something much more to the right than that”, he explains.

The advance of the right-wing candidate in the primaries is not an isolated case in Argentina. Among the 24 districts in the country, only six had representatives of the party of the current leftist president, Alberto Fernández, as leaders at the polls. The Together for Change group, led by the former president of Maurício Macri, won 41.50% of the votes, which signals the weakening of the current presidency. “This shows both a dissatisfaction with the economy, which has not been able to react in recent years, even with the changes in Macri and current political changes, as the conservative wave itself, which came from Europe, passed through the United Kingdom, the United States and now it seems to be located here in Latin America”, analyzes professor Regiane. In the specific case of the Libertarian Party candidate, she sees his support not only as an advance from the right, but also as a rejection of traditional politics. “It has been gaining more and more popular support, this popular support is identified both by people from the extreme right and right, but also as a protest vote. So, those who are very dissatisfied with Macri’s policy, with all these years of Kirchnerism, are finding in him an increasingly popular figure to demonstrate their protest”, he points out. Velasco also fails to see in the percentage of primaries a population that fully agrees with the economist’s radical ideas.

“I think primary results are not yet a definitive thermometer. I understand that they are a strong indicator for the November legislative elections, but they are not decisive. I see that there was a lot of a punishment vote, a protest vote. In other words, there is disappointment with Argentina’s economic chaos that has been dragging on for several years. Whoever pays the duck ends up being the one who is sitting in power, so the next wave is Fernández. Even so, I don’t see in the 13% who voted for libertarians a real identity with this Milei agenda, this more extreme agenda”, he opines. Even with the victory imminent at the polls, the economist may not be able to push to the government all the agendas he wants for the country, since he will be just one in a sea of ​​257 deputies. “Surely he won’t be able to do all this. He doesn’t even have the power to be part of what he wants, but [se for eleito] it can gain much more visibility, gain more and more support”, analyzes the professor from Unifesp.

The UERJ professor recalls that the optimistic projection of the Libertarian Party, Milei’s legend, is that four candidates will be elected in 2021. “He alone will have much less power than being able to count on a caucus of eventually four libertarians. From [dessa definição] he will try to show service. In practical terms, within the parliament, it will eventually be able to present some proposals and support projects that try to limit the access of deputies to public resources. He may try to push forward a project that would extinguish Argentina’s Central Bank, as he is also very critical of spending, but he may not have a very large caucus in front of the coalitions, Juntos Por El Cambio and Frente de Todos. It will be a smaller bench, without so much impact in concrete terms”, he analyses.

Chances for presidency in 2023

The candidate’s overt presence on social media generates a series of hashtags pointing to him as victorious in 2021 and also in 2023, when the country must decide whether Alberto Fernández remains in office or whether a new president will take office in Argentina. Experts have different views when assessing the candidate’s role in the country’s upcoming national elections. Velasco points out that there are a series of conditionals to be faced and says that it is still too early to answer if Milei’s advance in the primaries is just “stubble fire” or a real trend of growing conservatism in the country. He also recalls that the “worst of all worlds” for the candidate would be not to win the elections for deputy and remain out of focus until 2023. “If you look at the last elections in Latin America, in Uruguay, Ecuador, Peru, it always appeared then a candidate from the ultra-right trying to surf this wave that is so characteristic in the world lately. Now, it’s Argentina’s turn”, he points out. Bressan, in turn, believes in the possibility of a more ascending right, mainly due to the population’s dissatisfaction with the handling of crises in the country. “I think it is still incipient to say that he will run for and win the elections close to 2023, but it is not strange if he runs for office or even will be elected in 2027”, he analyzes. The primary elections served to determine which candidates will appear on the ballots on November 14, when voters go to the polls again to renew a third of the Senate and half of the Argentine Chamber.