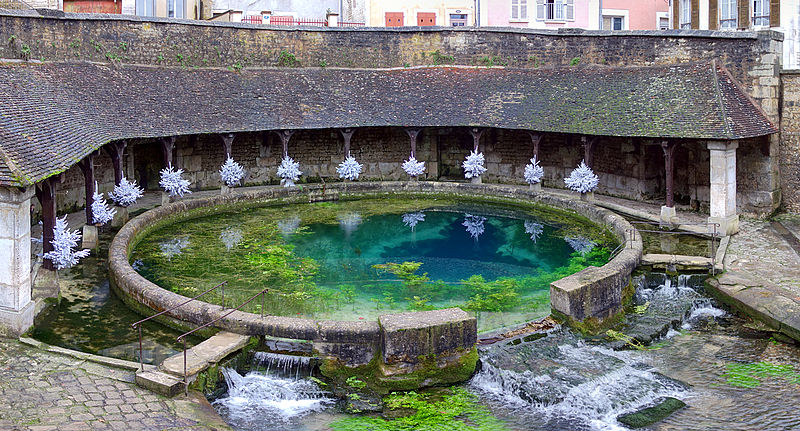 At the heart of France’s idyllic Burgundy region, there is one of the most mysterious attractions: a well, apparently bottomless, known as Fosse Dionne.

A Dionne pit is, according to the How Stuff Works, a caustic source that expels an average of 311 liters of water every second, an extremely high discharge, although the speed depends on the season.

In spring, for example, this “divine well” is a circular stone pool filled with water in jewel tones: turquoise, amber and sky blue are the colors that paint the minerals of the fountain.

Water has already been used by locals to cook, bathe and even drink, but it has also motivated some legends.

In the Middle Ages, it was thought that there was a snake crossing the depths of Fosse Dionne, with some people claiming that it was a portal to another world.

Spring is the season that most deserves to be highlighted in the reports of the miracles performed by the monk St. Jean de Rèome, in the 7th century. The monk will have found a basilisk – a half-rooster, half-lizard creature – at the fountain, but it killed him, so that people could continue to use the water to drink.

Currently, Fosse Dionne looks very “civilized” on the outside: the stone basin is surrounded by a communal washbasin, built in the 18th century to protect the washerwomen from the weather while washing their clothes. Below the surface of the water, the source is as wild as St. Jean de Rèome used to tell.

Despite the legends, there are a mystery that remains to this day: nobody knows where the source water comes from.

The portal writes that water emerges from a network of underground limestone caves. However, safeguarding, no diver was able to find its origin.

In fact, many of those who tried, didn’t come back alive.

In 1974, two divers began to navigate the maze of chambers and narrow tunnels of the spring and none returned to report what they had seen. In 1996, another diver tried, but also lost his life at Fosse Dionne.

In 2019, diver Pierre-Éric Deseigne explored 370 meters of passages and returned to the surface to report that did not find the source of the source.