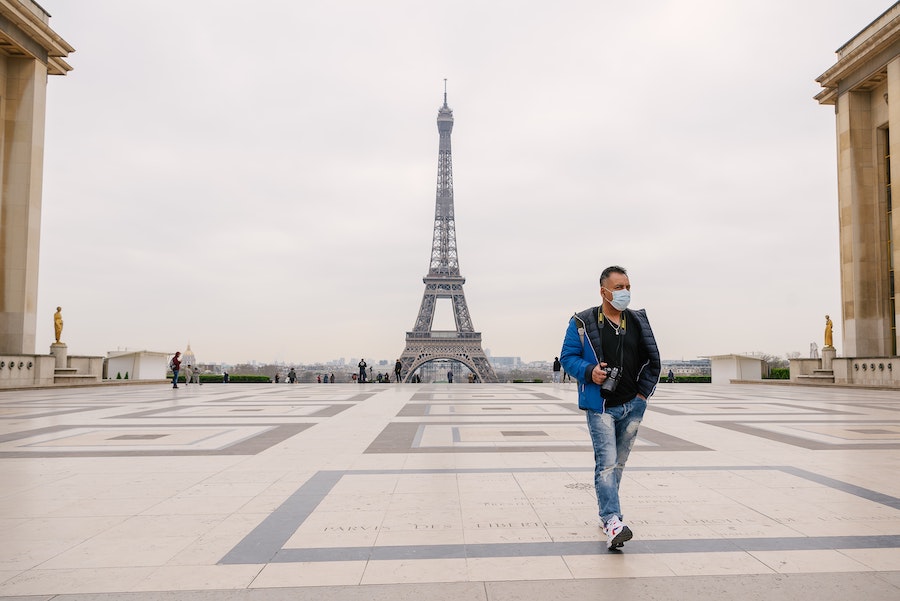 The French government announced this Monday that the country has entered the fourth wave of Covid-19, with 80% of cases detected originating from the Delta variant and a 125% increase in contamination in the last week.

“We have entered the fourth wave of the virus […] the epidemic dynamic is extremely strong, we see a faster wave with a sharper peak than the previous waves”, said the government spokesman, Gabriel Attal, at the press conference after today’s Council of Ministers at the Élysée Palace.

The government official also said that the overwhelming majority of cases detected, around 80%, originate from the Delta variant and that in the last week the contamination increased by 125%.

Faced with this progression of the virus, the Government will proceed with the imposition of the health pass as of July 21 for cultural spaces, such as cinemas or museums, and in early August for bars and restaurants.

Bar and restaurant employees are also required to be vaccinated to continue working.

Since the announcement of the mandatory health pass made last week by the President Emmanuel Macron, 3.7 million French people have already scheduled the first dose of vaccine against Covid-19 and Gabriel Attal stressed that there are 9 million vaccines stored and that France will receive 4 million doses per week until the end of August.

Since Sunday 4,151 new cases have been detected in the country and 20 people have died from the virus. In general, on Monday, the numbers of new cases in France are lower because laboratories are closed on Sundays.

There are currently 7,041 patients admitted to hospitals due to the virus and 902 of these people are in intensive care.

Death toll in India may be higher

Total deaths in India due to covid-19 can be 10 times higher to official figures, that is, several million rather than thousands, making it the worst tragedy in modern India, according to a study released today.

The document, published by Arvind Subramanian, a former economic adviser to the Indian government, and two researchers from the Center for Global Development and Harvard University, calculate that the excess of deaths – the difference between registered deaths and those that would be expected under normal circumstances – is between three and 4 .7 million between January 2020 and June 2021.

The study authors say that while it is not possible to determine an exact number, “it is likely that [o total de mortes] be of a magnitude greater than the official count”.

The report points out that the official count may have left out deaths in overburdened hospitals, especially during the devastating second wave of the pandemic in the first half of the year.

“The true death toll is likely to be in the millions and not of the hundreds of thousands, which makes this human tragedy arguably the worst in India since partition and independence,” reads the study, quoted by the Associated Press (AP) news agency.

In 1947, the partition of the British Empire from India, which gave rise to two independent states (India, mostly Hindu, Pakistan, Muslim), led to the deaths of about one million people, resulting from massacres between Hindus and Muslims. .

The study resorted to three calculation methods: data from the civil registration system, which records births and deaths in seven states, blood tests that show the prevalence of the virus in India, along with global death rates due to covid-19, and an economic survey of close to 900,000 people, held three times a year.

The investigators analyzed deaths from all causes and compared these data with mortality in previous years, a method considered to be accurate.

The study authors cautioned, however, that the prevalence of the virus and covid-19 deaths in the seven states analyzed may not be equally reflected across India, as the virus may have spread more in urban states than rural areas and that the quality of health care varies greatly across the country.

The specialist Jacob John, of the Christian Medical College in Vellore, South India, told the AP that the report underscores the devastating impact covid-19 has had on India’s ill-prepared healthcare system.

“This analysis reiterates the observations of fearless investigative journalists who pointed to the huge understatement of the deaths,” said Jacob.

The report also estimates that around two million Indians will have died during the first wave of infections last year.

In the document, it is stressed that not “perceiving the scale of the tragedy in real time” at that time may have “created a collective complacency that led to the horrors” of the devastating second wave, which peaked in mid-May, with more 400,000 new cases per day.

In recent months, some Indian states have revised upwards the number of deaths caused by covid-19, raising concerns that many have not been officially recorded.

According to data from the Indian Government, India has registered 414,482 deaths since the beginning of the pandemic, making it the third country with the most deaths caused by the SARS-CoV-2 coronavirus, after the United States and Brazil.

A batch of 12,000 AstraZeneca vaccines and medical supplies offered by Portugal arrived in Dili, marking the beginning of Portuguese bilateral support for the vaccination process against Covid-19 in Timor-Leste.

“It is a first batch destined for a fight that currently transcends any borders, the fight to end the pandemic situation we are currently facing”, said the ambassador of Portugal in Dili, José Pedro Machado Vieira.

The vaccines arrived in Dili aboard a Boeing 767-300 from euroAtlantic airways (EAA), a company that since the beginning of the pandemic has carried out several flights between Lisbon and Dili, being, at times, one of the few alternatives for the Portuguese to travel between the two cities.

The flight had about 70 people on board, returning on Wednesday to Lisbon with almost 190 passengers.

In a statement released on Monday, the Ministry of Foreign Affairs explained that “with this action, the first cycle of sending vaccines to the PALOP and Timor-Leste is concluded”.

The measure is part of “the political commitment to make available to those countries”, the main cooperation partners, “at least 5% of vaccines against Covid-19 acquired by Portugal, an initiative also included in the second phase of the Action Plan in the health response to the Covid-19 pandemic between Portugal and Portuguese-speaking African countries and East Timor”.

The operationalization of this action, the text also points out, “is the result of the joint effort of the Ministry of Foreign Affairs, namely through Camões – Institute for Cooperation and Language and the Embassy of Portugal in Dili, and the Ministry of Health, through the Directorate-General for Health (DGS), the National Authority for Medicines and Health Products (Infarmed) and the Task Force of the National Vaccination Plan against Covid-19 in Portugal”.

On Saturday, the Portuguese prime minister, António Costa, announced in Luanda that Portugal will triple the offer of vaccines to the PALOP and Timor-Leste, from one to three million doses, in the fight against Covid-19.

At the final press conference, after the closing of the XIII Summit of Heads of State and Government of the Community of Portuguese Language Countries (CPLP), António Costa recalled that Portugal had pledged to offer 5% of the total vaccines, but the bills most recent allow four times as much to be made available.

In the case of the PALOP and Timor-Leste, the Portuguese Government will “triple and go from one million to three million the number of vaccines to be distributed”, said Costa.

“According to the calculation that we have of vaccines that we are going to be able to make available”, it will be possible to donate “a total of four million vaccines”, he explained.

“Therefore, we have another million that we will allocate to other programs, namely we can extend to Brazil, Latin American countries or we can simply integrate the Covax mechanism, without any specific recipient”, said António Costa.

On board today’s plane came the ashes of a Portuguese citizen, Jose Valverde, former RTP employee who lived for several years in Timor-Leste and who eventually died in Portugal, having expressed the desire to be able to return to Dili.

Timor-Leste currently has 766 active cases across the country, with a total of 26 deaths and 10,142 cases accumulated since the start of the pandemic.