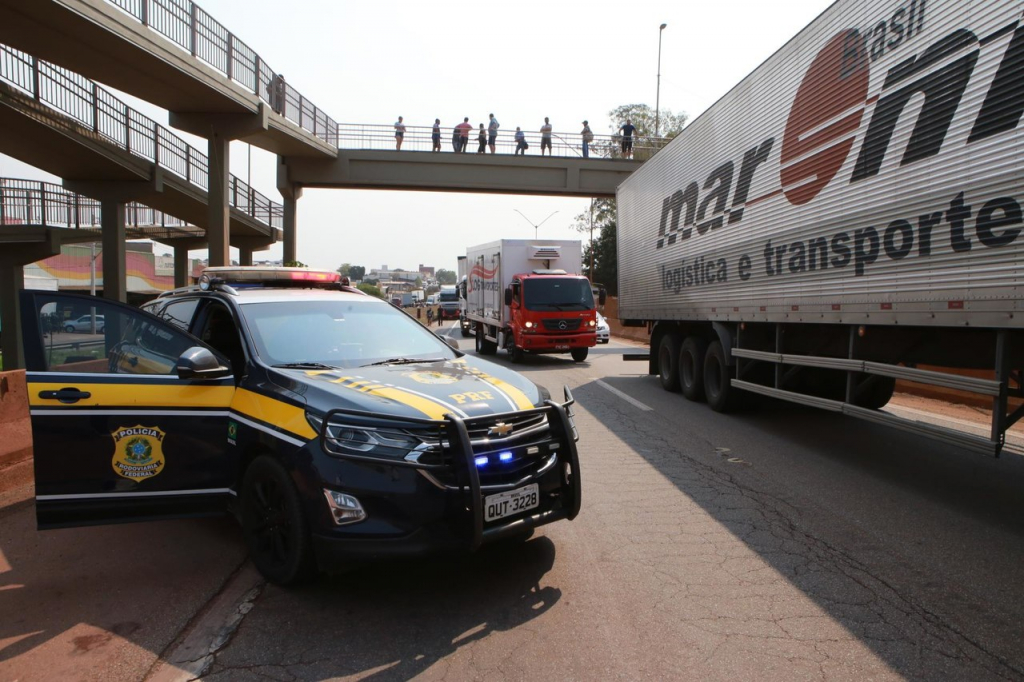 According to the Ministry of Infrastructure, stoppages are maintained only in Bahia, Maranhão, Minas Gerais, Mato Grosso do Sul and Santa Catarina

O federal government announced this Thursday, 9 the release of part of the roads blocked by groups of truck drivers for the second day in a row. According to the Ministry of Infrastructure, the mapping of the Federal Highway Police (PRF) identified concentration points in 14 states, but with interdiction in only five: Bahia, Maranhão, Minas Gerais, Mato Grosso do Sul and Santa Catarina. In the states of Rio Grande do Sul, Paraná, Espírito Santo, Mato Grosso, Goiás, Tocantins, Rondônia, Pará and Roraima, traffic is free, but there are still cargo vehicles approaching. The mobilization is mostly carried out by supporters of President Jair Bolsonaro (non-party) and comes after the escalation of the tone of the Chief Executive against members of the Judiciary during demonstrations on the September 7th holiday. The president released an audio on Wednesday, 8, asking the groups to unlock the road. According to Bolsonaro, the mobilization harms “the poorest”. “Talk to the truck drivers here, who are our allies. These blockades disrupt our economy and this causes shortages and inflation, harming everyone, especially the poorest. So give the guys a touch, if possible, to let us follow the normal course. Leave it to us in Brasilia here now. It is not easy to negotiate here, but we are going to find a solution”, he said.

The request was reinforced by the Minister of Infrastructure, Tarcísio Gomes de Freitas, who released a video to attest to the veracity of the audio. “This stoppage would aggravate the effects of the economy that would impact the poorest, the most vulnerable. We know that everyone is concerned about improving the country, solving serious problems, but we cannot try to solve one problem by creating another one”, said the presidential assistant. The president said this morning that he will meet with truck drivers’ leaders to try to lift the stoppages. “I have an hour in the morning, I already have the time taken with the BRICS, an hour, but I’m earlier too. During these two breaks I will talk to the truck drivers so that we can make a decision”, he said in a conversation with supporters at the Palácio da Alvorada.

The act was contested by businesspeople and sector entities. In a video posted on social networks, Urubatan Helou, CEO of Braspress, one of the main transporters in the country, asks the PRF, the Federal Police (PF) and the National Land Transport Agency (ANTT) to control the situation and unlock the highways. “We cannot repeat 2018, when there was that strike by truck drivers. Brazil cannot be short of supplies”, he stated. In a repudiation note, the National Association of Cargo Transport and Logistics (NTC&Logística) stated that the movement is of a political nature and has no relationship with the category’s flags and claims. “NTC is concerned about the roadblocks, which could cause serious inconvenience to the transport activity carried out by companies, with serious consequences for the supply of production and trade establishments, directly reaching the final consumer, of products of all kinds, including those of first need of the population, such as food, medicine, fuel, etc”, states the text signed by the president of the organisation, Francisco Pelucio. “NTC makes it clear that it does not support this movement, repudiating it, advising transport companies to continue their activity and advising their drivers so that, in case their vehicles are blocked, they immediately call the police authority requesting their release.”

For the president of the Transport Companies Union of São Paulo, Tayguara Helou, it is indeed necessary to advance with demands, but that is not how the agendas should be discussed. “The cost of diesel oil is high, due to the sector’s tax burden, the inputs in the sector are very expensive, but it is not paralyzing that we are going to solve this. The economy does not move and it does not fit into a sector through a standstill, through violence. At some points people are inciting violence. Cargo transport companies are not going to stop, we do not accept a situation like this.” The director of the Brazilian Association of Independent and Free Fuel Dealers, Rodrigo Zingales, warns about what the stoppages could represent for the economy. “This is just going to generate a whole ripple effect. If they stopped, I would have less fuel on the street, less food, less medicine, less essential goods. The population will once again be held hostage by this scarcity of essential goods and industries will stop producing, commerce will stop selling and we will have losses in GDP”, he points out.