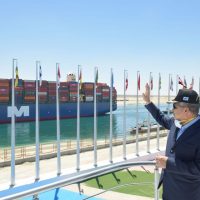 Lieutenant General Osama Rabie, Chairman of the Suez Canal Authority, honored, today, Thursday, the workers participating in the floatation of the giant Panamanian container ship EVER GIVEN, in the presence of the members of the board of directors of the authority, and the media, in the covered hall in Ismailia.

A documentary film about the floatation of the Panamanian container ship was shown, followed by the speech of the Chairman of the Authority.

At the beginning of his speech, Lieutenant General Osama Rabie conveyed the greetings of President Abdel Fattah El-Sisi, President of the Republic, and his pride in the efforts made by the Authority’s staff over a period of 6 continuous days to float the giant Panamanian ship.

The head of the authority emphasized that floating and saving one of the largest container ships in the world is a national epic and a new achievement that overcame various challenges and risks, and with it the ordeal turned into a grant, and this experience has become a practical lesson in how to manage crises, and an affirmation of the canal’s capabilities and the competencies and capabilities it possesses.

Lieutenant General Rabie stressed that he was fully confident in the ability of the Authority’s staff to overcome this crisis, like many of the previous challenges.

He emphasized that the human factor will remain the most important asset that the authority possesses in terms of capabilities, capabilities and the backbone of this important global entity not only for Egypt but for the whole world.

He explained that these exceptional circumstances surrounding the accident of stranding of the ship demonstrated the capabilities and expertise of the authority in various fields in dredging, salvage, towing and civil works, which were the decisive factor in this crisis.

The head of the authority continued, saying: We have paid equipment that suits the complexity and magnitude of the situation, so the dredging works by the authority’s dredges, whether the “famous” dredger or the “Tenth of Ramadan” dredger, were a major factor in facilitating the floatation process of the ship by reaching depths of up to 18 meters.

Lieutenant General Rabie referred to the important role played by a series of the giant authority’s locomotives specialized in rescue and towing work, on top of them the two locomotives “Baraka 1” and “Izzat Adel” with a tensile strength of 160 tons each, and the two new locomotives Abdel Hamid Youssef and Mustafa Mahmoud with a tensile strength of 70 tons in addition To other accompanying body tugs with great experience in accompanying and salvaging ships.

The head of the authority stressed that work is being carried out in full swing and around the clock to finish crossing all ships in the maritime route safely and securely, with the help of a distinguished crew of guides and movement management men in the three sectors of the channel.

He said that the navigation traffic in the Suez Canal witnessed the crossing of 194 vessels, with a total net tonnage of 12 million tons, from Monday evening until Wednesday.

He added that 87 vessels are scheduled to cross the canal today, Thursday, with a total net tonnage of 5.6 million tons.

The team, Osama Rabie, took memorial photos with the workers participating in the floatation of the giant Panamanian container ship EVER GIVEN from the various departments of the authority.

The article 194 ships transiting the Suez Canal from Monday until yesterday evening was written in the Al-Borsa newspaper.